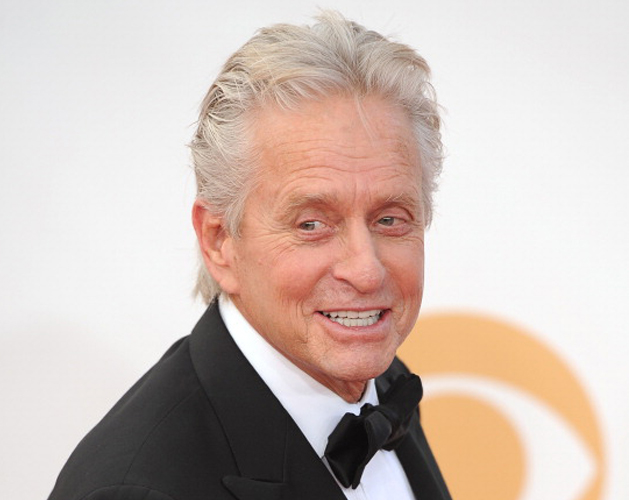 In honour of his 74th birthday (Sept. 25, 1944), we flash back to our interview with Michael Douglas on film, family and some of his memorable on-screen kisses.

From Gordon Gekko in Wall Street to his award-winning turn as Liberace, opposite Matt Damon, in Behind the Candelabra, Michael Douglas has cemented his legend in Tinseltown. But if art, as they say, imitates life, Douglas’ latest film, the rom-com And So it Goes, walks a fine line. Sure Douglas’ character, Oren Little, finds true love in the second half of his life.

And, as Douglas notes, “the whole issue with the father with a son going to jail was clearly one I related to.” But Little’s personality – a cantankerous realtor who finds his life interrupted by a number of extraordinary circumstances, including the temporary custody of his estranged granddaughter – couldn’t be further from the truth. Speaking with Douglas on the phone from Los Angeles, he projected a kindness and charm his curmudgeonly character would loathe.

Douglas and I discussed his film, his family, boomer stories on the big screen, and some of his memorable on-screen kisses.

RELATED: POPCORN PICKS: And So It Goes

MIKE CRISOLAGO: And So It Goes centres around trials, tribulations, and romances in the second half of life. How important is it to explore perspectives related to aging through film?

MICHAEL DOUGLAS: It’s part of our population, it’s part of our culture and there certainly should be movies for people of an older age. And I like And So It Goes because it deals with a lot of the problems that older people have – do they have enough money for retirement? Are they required to downsize? Do you, at the twilight of your life, have to change your lifestyle financially, and does that embitter you? And how do you overcome that or keep that spark alive? If you can tell those stories in an entertaining fashion and with humour, so much the better.

MC: Throughout your career you’ve worked with many brilliant leading ladies. Tell me what it was like acting opposite Diane Keaton in this film.

MD: She’s great because she’s the first one to confess that, “I’m not an actress. I’m just who I am.” And she just brings her persona, as charming and clever and funny… I was fascinated by her quirkiness, love her style, and she has an inherent, wonderful sense of humour that brings the wit and the positive side to any situation. Plus she’s a hell of a singer. And a good kisser, I might add.

MC: One of the perks of working with great actresses?

MD: Well Matt [Damon] is right up there too now – we can’t forget Matt.

MC: You and the film’s director Rob Reiner also have something in common, with both of you born into famous show business families.

MD: I think we always have shared this sort of second-generation feeling. There’s not many of us who’ve had extremely successful fathers and have been able to have a career of our own…It certainly gives you the opportunity of getting your foot in the door, but the reality is half our genes are made up of our fathers’, so there’s going to be similarities at a time when you’re looking for your own individuality. I think it takes a little longer…to kind of find your own identity.

MC: In this film you play a grandfather. Does it ever get you thinking about one day having grandkids of your own?

MD: Yeah, but I’ve got young kids – Catherine (Zeta-Jones) and I have got an 11-year-old and a 13-year-old – both of whom want to be actors. And both of them are talented, so it’ll be interesting to see. I only hope I’ll be around for my grandchildren, but in the meantime I certainly have Dylan and Carys to be proud about and to watch how they conduct their careers in the future.

MC: As an actor, do you find it more difficult to find substantial roles as you age?

MD: Well, you’re not going to be as much the leading man. You’re going to be usually the secondary story, or the father of. But, you know, there are still parts there. For me, right now, this is as busy and active a time as I’ve ever had. I was so fortunate to get Behind the Candelabra coming to me out of my whole cancer bout. Then Last Vegas. I’m fortunate at an age where people talk about retirement it’s the last thing on my mind. At the same time, I’m enjoying, at an age when most people’s kids are already out of the house, I’m really enjoying having young kids with Catherine. I never expected or anticipated that. There’s a number of other benefits other than just focusing on one’s career, but certainly it’s been a great shot in the arm to see the amount of stuff that I have been able to do at this age, and upcoming.

MC: Looking back, are there roles you wish you could have played, or still hope to play?

MD: For some reason all my roles have been contemporary. I only did one historical picture in my entire career. Maybe it’s my son’s influence – he loves the Civil War and he just thinks I’d be great playing Ulysses Grant. I’ve never been a sci-fi fiend but certainly historically, so I might find some more historical type pieces to play. But you just never know where it’s going to come from…What I’ve always tried to do is to be involved in good movies. Sometimes you have the best part, sometimes somebody else has got the good part. But you want to be involved in a good movie.

MC: You touched on your battle with stage four tongue cancer earlier. Can you update us on how your health is doing?

MD: I’m great. I get checked out all the time. I’m down to just once a year checkups. I’m cancer-free and hopefully to remain that way. You’ve always got a fear of some other form of cancer coming back but I don’t dwell on it. I’m just really blessed and fortunate to be back. I do think you probably treat each day a little more valuable; part of that is overcoming cancer, part of that is just getting a little older. You know, you’re on the other side. You can count the years ahead. So you try to think a little more carefully about each day and what you’re going to do.