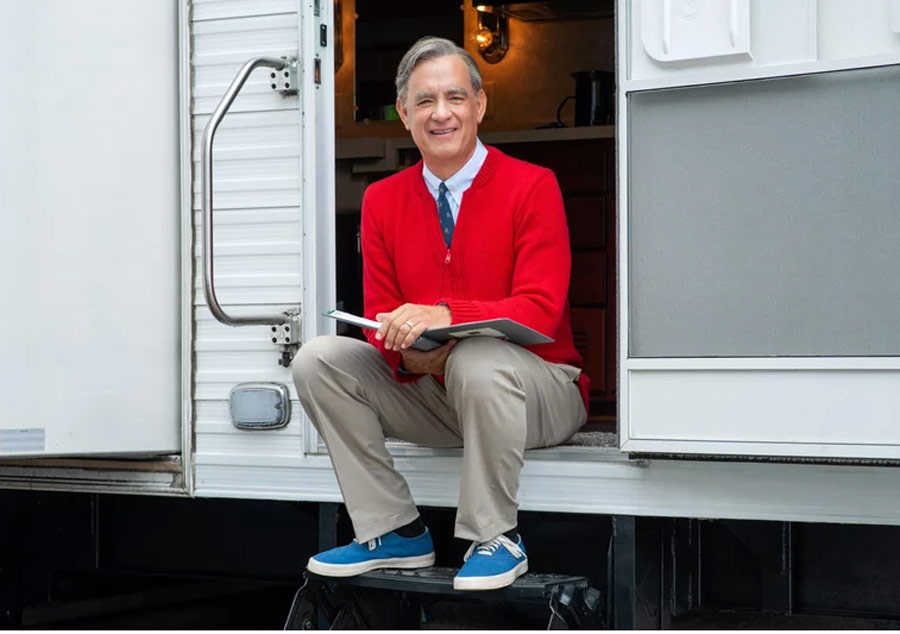 It’s a beautiful day in the neighbourhood, indeed!

Sony Pictures released the first photo of Tom Hanks in character as Mr. Rogers on Thursday, and — it goes without saying — the internet went wild. Within hours of its release the image had gone viral, with longtime fans of Mister Rogers’ Neighborhood sharing in their excitement.

That’s right, folks! Hanks — Hollywood’s Mr. Nice Guy — is set to take over the entire neighbourhood as the iconic children’s TV personality. We don’t even need to see a movie trailer to know this casting choice is on point.

The 62-year-old Oscar-winner, sporting gray-dyed hair and eyebrows, was snapped outside his trailer, script in hand, wearing Fred Rogers’ standard attire of bright red sweater pulled over a buttoned-up shirt and tie over khaki pants. And, of course, there’s those blue sneakers.

Along with the photo, Sony also revealed that the currently untitled movie will hit theatres Oct. 2019. But make no mistake — this isn’t a biopic.

Instead, the film will focus on Rogers’ unlikely friendship with award-winning journalist Tom Junod, who befriended the beloved TV personality while writing a 1998 profile on the star for Esquire magazine.

“[This] movie is … not a biopic,” the film’s director, Marielle Heller, recently told Entertainment Weekly. “I disliked that, when it got announced, it was characterized as such. It’s really not. It’s a movie that’s largely focused on a reporter and [Mr. Rogers’] relationship to his life, and how [the reporter’s] whole world changes when coming in contact with Fred Rogers.”

Mister Rogers’ Neighborhood aired for an impressive 31 seasons (that’s 912 episodes in total!) between 1968 and 2001, coasting on the gentle charm of its lead character.

Fred Rogers, who died of stomach cancer in 2003 at 74, was also recently the subject of the documentary, Won’t You Be My Neighbor? that bowed at this year’s Sundance Film Festival.