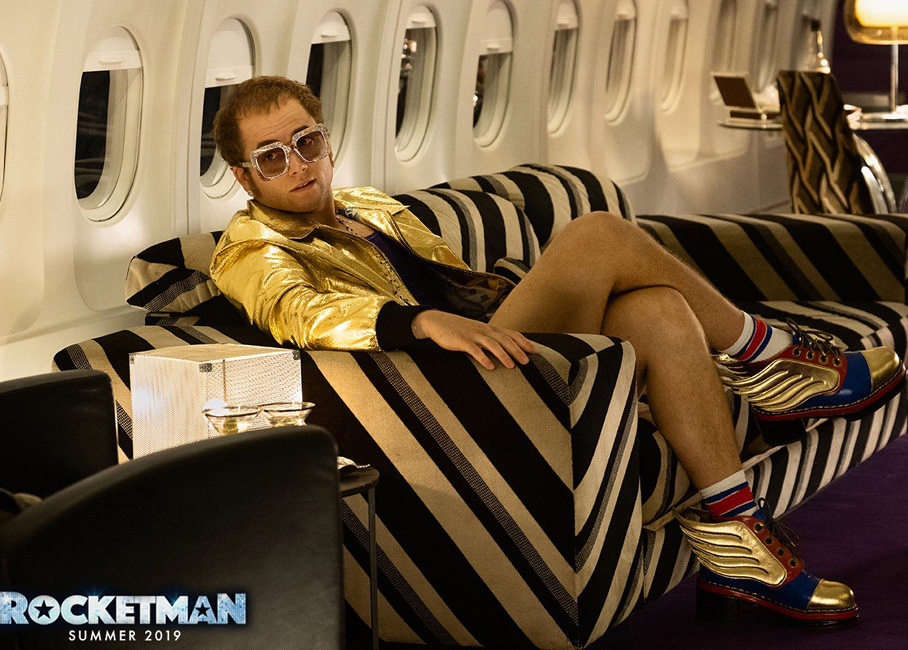 You might call it the “Circle of Life” — a young Elton John attends the Royal Academy of Music, proves a musical prodigy, turns to rock and roll, carves out a legendary 50-year music career and finally, in the midst of his worldwide retirement tour, enjoys the big screen biopic treatment. Except, as we’re learning about Rocketman, the film about the 71-year-old’s early life and rise to fame, this is no biopic at all.

The first teaser trailer for the 2019 film dropped on Monday (watch it above) with the tagline “Based on a true fantasy,” confirming that the movie isn’t as much a biopic as a fantastical retelling of Sir Elton’s early life and career (the scene where a young Elton, played by Kingsman actor Taron Egerton, croons “Rocket Man” as the audience around him begin to float in magical, suspended animation, kind of reinforces that point). This, of course, was all hinted at back in May, when Egerton told Collider that Rocketman is not a biopic but rather “a fantasy musical, so it’s actually his songs used to express important beats in his life at emotional moments. [Elton’s] not the only character that sings. It’s going to be fun.”

Still, this doesn’t mean that the film, from what we’ve seen of it, doesn’t look great. The teaser trailer focuses on Elton’s transition from Reginald Kenneth Dwight — his birth name — to the glittery rock and roll force known as Elton Hercules John (which is now also his legal name). We see shots of him running through the streets as a young boy, his chance meeting with lyricist Bernie Taupin, performing at his breakthrough American debut concert at L.A.’s Troubadour nightclub, his now-legendary Dodger Stadium concert as well as hints about the singer’s struggles with alcohol, drugs and depression. Cue “Someone Saved My Life Tonight.”

The first image of Egerton as Elton (or, as I call him, “Egerton John”), meanwhile, dropped last week and, as is the case with the trailer, the actor proves almost a spitting image of the rock star, particular when donning the over-the-top wardrobe, including the fitted, bedazzled Dodger’s jersey and cap or gold lamé jacket with matching sneakers, that epitomized Elton’s onstage and public persona. Egerton also sings the Elton tunes in the film after impressing the real-life rock star with his pipes during an audition. David Furnish, 55, Elton’s Toronto-born husband and co-producer on the film, even noted that, “Elton has told Taron, ‘Don’t copy me. Don’t think you have to sing it exactly the way that I sang it. Don’t think you have to perform it the way I performed it’. I think it’s the challenge for the actor to embody the spirit and not get into thinking they have to do an impersonation.” Of course, this isn’t Egerton’s first time singing for a role or even his first time singing an Elton John song for a role, as he performed “I’m Still Standing” in the 2016 animated feature Sing.

The film is written by British scribe Lee Hall, who penned the film Billy Elliot and, subsequently, worked with Elton to adapt it into a celebrated stage musical, including penning the lyrics to the show’s tunes, for which he won the Tony Award for Best Book of a Musical. Dexter Fletcher, who replaced Bryan Singer at the helm of the upcoming Queen biopic Bohemian Rhapsody (though, due to Director’s Guild of America guidelines, he doesn’t receive a directing credit) also directs this movie, leading some to question how far Rocketman will delve into Elton’s homosexual lifestyle after the Queen film earned criticism for seemingly glossing over Freddie Mercury’s sexuality and subsequent battle with HIV/AIDS.

We’ll have to wait until the Elton movie’s release to see how that personal subject is handled. Still, with the real-life rocker in the midst of a three-year long global farewell tour — with 25 new dates, including in Canada, added recently — along with the release of Rocketman on May 31, 2019, fans can feel secure in knowing that the sun isn’t going down on Elton John anytime soon.