Remembering the Moon Landing as ‘First Man’ Touches Down in Theatres 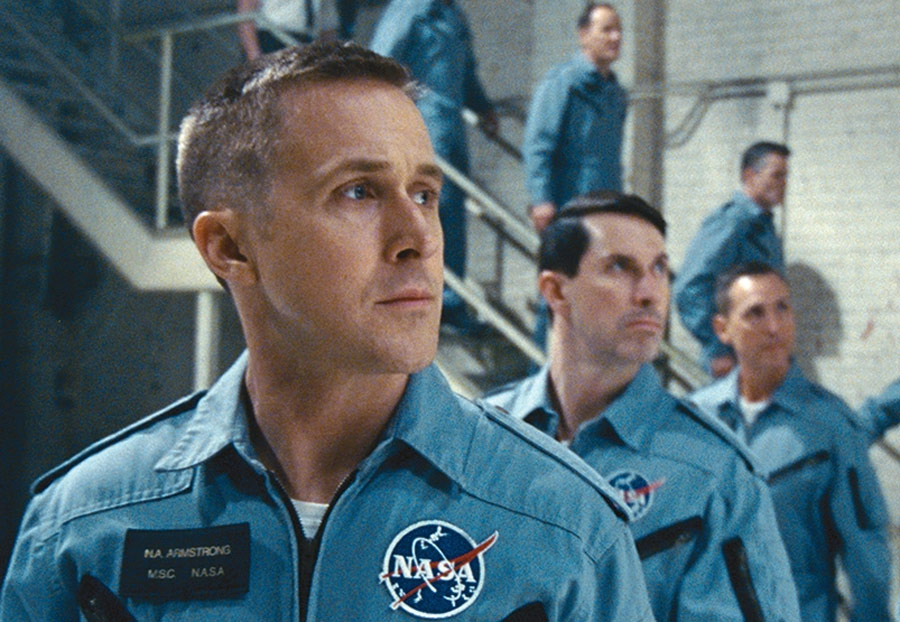 Ryan Gosling in a scene from the film "First Man."

It’s an awards season film, so many will buy tickets to see First Man, Oscar winner Damien Chazelle’s film with Ryan Gosling as Neil Armstrong, on the big screen. But it won’t resonate with everyone as much as it will for those of us who remember watching that grainy video feed in our living rooms.

I was 10 on July 20, 1969, and believed that my ancient box camera might capture those first steps from the Apollo 11 lunar module (sadly, my Winnipeg Tribune paper-delivery money was wasted at the drugstore photo lab). My mother couldn’t decide whether to cover her eyes or look, worrying out loud, “Is he going to sink?”

Those thoughts insinuated themselves as Gosling, on the big screen, made flesh and blood out of the stiff public figure that Armstrong always presented. I was always more a fan of “Second Man” Buzz Aldrin (played as an insensitive jerk by Corey Stoll). I met the aptly-named Buzz at a Star Trek convention in Huntsville, Alabama, home of NASA’s Marshall Space Center. Always a cut-up, he wore a Starship Enterprise tie.

But it was another astronaut that entered my mind as Armstrong’s familiar story (and lesser known domestic one) played out.

I don’t think he thought he was saying goodbye for all of us. A year later, he was giving speeches predicting we’d be back to the moon within a decade and on Mars before the end of the century.

I did get to talk to Cernan 13 years after his moonwalk, when I was a TV critic and he appeared at a Los Angeles press conference for the CBS miniseries Space (starring James Garner and Harry Hamlin), based on the book by James Michener. The characters were fictional, and Cernan had worked as a consultant on, among other things, Hamlin’s Gemini space-walk scene (Cernan had that accomplishment under his belt as well).

At the end of the press conference, we chatted a bit (most of the press were looking for words from the Hollywood stars). I was affected by that scene, and the thought of floating bodily in space with our entire planet in your field of vision, and I asked what I was afraid might be a silly question. At moments like that, did he ever think we should have sent poets up there? Cernan said he often thought exactly that, that he felt frustrated at being unable to find the words to convey what he saw.

As good a movie as First Man is, the triumphal mood of that event seems off-key in light of what’s happened after the Apollo program ended.

Yes, the Space Race was militarily-inspired, a Cold War baby dedicated to “proving” that the West had a better system than the Soviet Union. (And though people were transfixed worldwide, it wasn’t universally loved, as Chazelle underlines in First Man by including a protest scene soundtracked by Gil Scott-Heron’s spoken-word piece “Whitey on The Moon”).

But in Accessory to War, his new book with Avis Lang, astrophysicist Neil deGrasse Tyson portrays science and the military as “curiously complicit” in a Devil’s bargain that’s generally moved mankind forward over centuries.

“The universe is both the ultimate frontier and the highest of high grounds,” he writes. “Shared by both space scientists and space warriors, it’s a laboratory for one and a battlefield for the other.”

Whatever its baser motives, going to the moon was an aspiration — a goal accomplished by the United States as a nation. It’s hard to say what we in the West aspire to now. Satellites bring us TV in cottage country and GPS, so an entire generation can grow up not knowing how to read a map.

Jimmy Carter used to talk about the late 1970s as being a time of “malaise,” and it’s no coincidence that conspiracies first arose around then that said we never went to the moon at all.

For what it’s worth, President Trump has urged NASA to return to the moon ahead of any Mars mission, but hasn’t allocated much for the project (while cutting a whole bunch of others). As presidential commitments to space go, it’s up there with George W. Bush’s 2004 commitment — also unfunded — to get us back to the moon by 2020. So, for now, if Americans want to go to space, they’ll have to continue to do it as hitchhikers on Russian rockets (good thing Trump and Putin are pals).

Arguably, if we are going to stay on this planet, we could aspire to save it. But even as evidence mounts of dramatic harm we’ve done, powerful feet remain dug in (the current U.S. administration seeks to defund NASA programs dedicated to monitoring the environment).

Earthbound or not, aspiring to save ourselves might be our last great test as a species. In the meantime, some of us can remember what it’s even like to aspire.