Catwalk At The Castle: 6 Best-Dressed Guests at Princess Eugenie’s Wedding 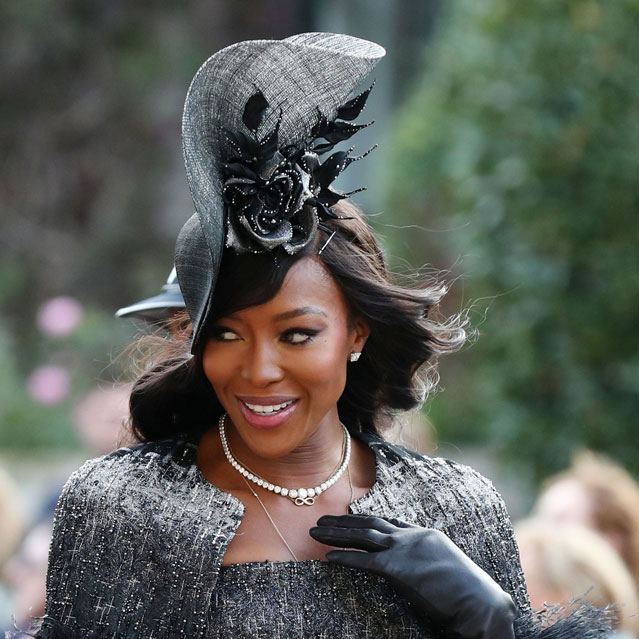 The bride — who has suffered the slings and arrows of the fashion police in the past, most notably at the 2011 nuptials of her cousin Prince William and Kate Middleton — rose beautifully to the occasion in a dress that blended modernity and tradition from the young British design house Peter Pilotto, setting the high fashion note that the guests stylishly played on as they “worked it” into the chapel.

Here, the best dressed of the day.

1. The Queen
Her Majesty was perfectly turned out in her trademark silhouette of hat and coat. It’s soft pastel shade was fitting and complimentary nod to a blushing bride.

2. Naomi Campbell
The Catwalk Queen broke with tradition by wearing black, which was anything but basic. The Ralph and Russo embellished corseted cage dress and coordinated bolero festooned with feathers amped up the evening glamour for day.

3. Cara Delevigne
The blue blood-turned-supermodel-turned-actor turned heads in a morning suit and top hat — gender-bending gear that she juxtaposed with a sharply feminine stiletto. Peak Brit wit — so chic.

4. Demi Moore
There’s no one more appropriate then a film star to bring a little Old Hollywood glamour to the proceedings. The fifty-five-year-old actress did not disappoint in a ’40s style fitted dress with molded sleeves with matching t-strap shoes, all in a classical autumnal shade. Kudos.

5. Catherine, Duchess of Cambridge
The duchess’s much-anticipated return from maternity leave started with a low-key vibe earlier this week — with a casual appearance in mucking outfit, followed by a repeat of an Emila Wickstead dress — before knocking it out of the park in a fresh-off-the-runway Erdem number that built up the anticipation for her look today. The eye-catching plum fit and flare dress from her go-to wedding designer – including for her own wedding – Alexander McQueen, with on trend bold shoulders, proves she’s definitely playing the fashion game to win.

6. Pippa Middleton
The other Ms. Middleton is known to stand out at royal weddings, but we’re green with envy that on the day before her due date (and being even more pregnant than Zara Tindall was at Prince Harry and Meghan Markle’s wedding in May), Pippa managed to look like this. Enough said.