Duchess of Sussex Debuts Baby Bump During Visit to Australia 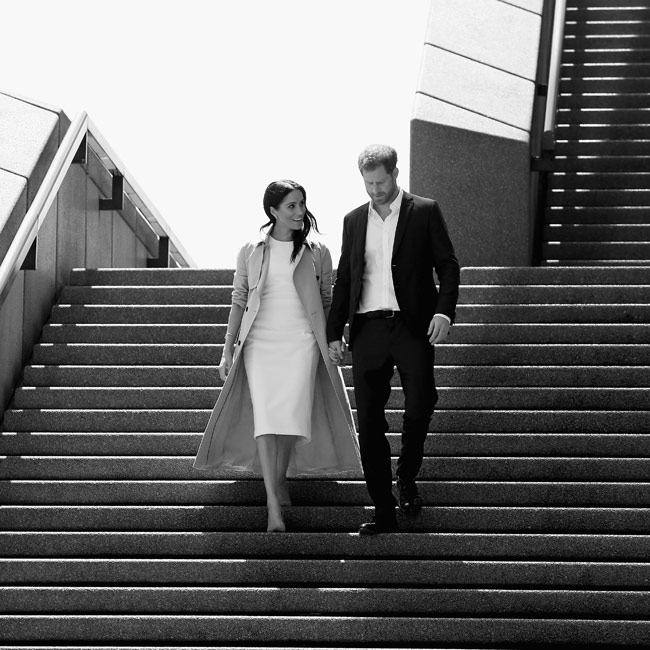 Meghan, Duchess of Sussex and Prince Harry on the steps of the Sydney Opera House. Photo by Don Arnold/WireImage via Getty Images.

It’s been less than 48 hours since Prince Harry and Meghan, Duchess of Sussex announced that they’re expecting their first child in the spring, but the internet has already gone into #bumpwatch overdrive.

We didn’t have to wait long, however, to catch our first glimpse of Meghan’s tiny bump. The duchess was all smiles — it must be that pregnancy glow — during her first post-announcement engagement at Sydney’s Admiralty House. The couple thanked Australia for the “incredibly warm welcome” they’d received on the first day of their Royal Tour and the “chance to meet Aussies from all walks of life.”

“We also genuinely couldn’t think of a better place to announce the … er … upcoming baby, whether it’s a boy or a girl,” a visibly nervous Harry added.

The duchess was equally enthused to share the news. “We’re ready! We’re excited to join the club,” she said.

The couple touched down in Sydney earlier this week to kick off their 16-day Commonwealth tour of Australia, Fiji, the Kingdom of Tonga and New Zealand. The tour also coincides with Harry’s Invictus Games, which will be held in Sydney this year. (Royal watchers will recall that Harry and Meghan made their official debut as a couple during the 2017 Invictus Games in Toronto.) Meghan’s Toronto-based gal pal (and personal stylist) Jessica Mulroney and her husband, Ben Mulroney, will also join the couple at several Invictus events.

The royal couple also shared a touching moment with a good friend of Harry’s from previous visits. During their first public meet-and-greet since announcing they are expectant parents, the couple met with hundreds of people who had patiently waited for them outside the Sydney Opera House.

As Harry made his way down the row, he noticed a familiar face in the crowd: 98-year-old war widow Daphne Dunne. She’d  previously met the prince twice — first in 2015, when she planted a kiss on his cheek, and again in 2017.

Harry greeted her with a big hug and introduced Dunne — who wore her late husband’s military medals — to Meghan. As the three chatted, Dunne gently held both Meghan’s hands.

“I’m so happy to finally meet you,” Meghan said. “I’ve heard so much about you. All good things.”

“I think it’s wonderful, the two of you,” Daphne said before handing the couple a card with some flowers.

“Enjoy the rest of the day,” Meghan said. “Hopefully next time we see you, we’ll have a little one with us!”