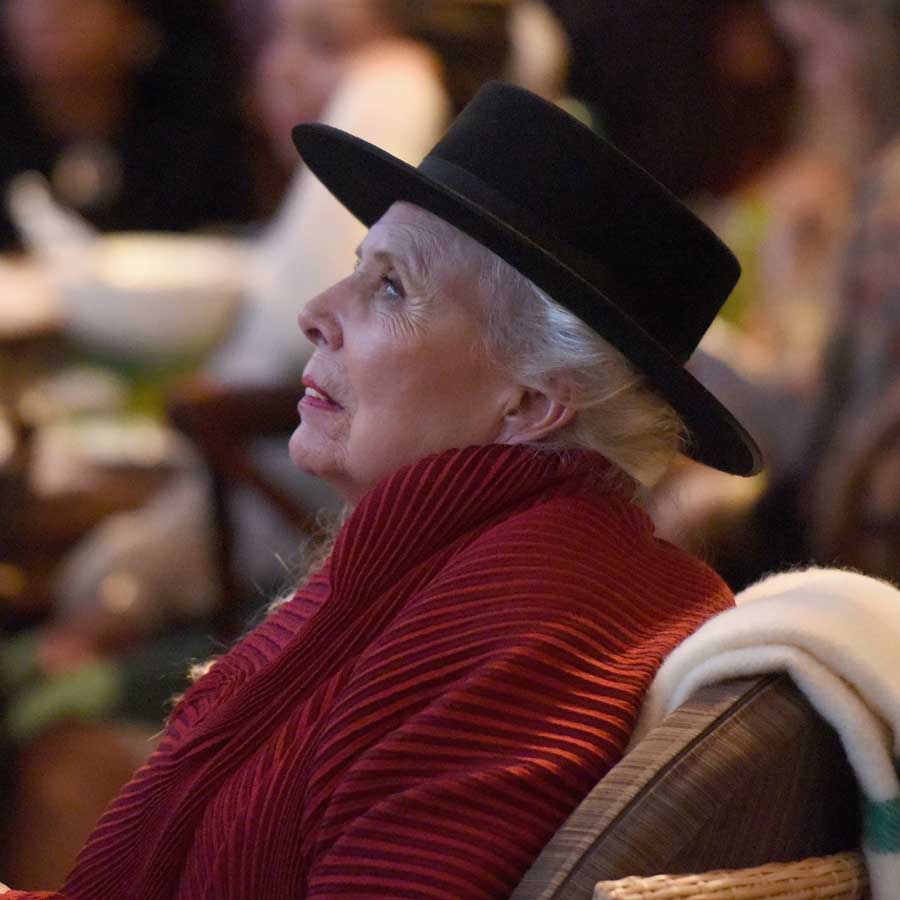 Canadian icon Joni Mitchell was honoured in Los Angelas on Wednesday with a star-studded gala celebrating her 75th birthday.

Mitchell enjoyed the celebration from the front row alongside guests such as George Takei, Mandy Moore, Rita Wilson and Tom Hanks.

Performers included James Taylor, Emmylou Harris, Norah Jones, Seal, Chaka Khan, and Canadian musicians Diana Krall and Rufus Wainwright. Each performer paid tribute to Mitchell with a cover of one of her many iconic hits.

Wainwright told the CBC that the tribute was particularly moving considering Mitchell’s health scare, which was fresh in everyone’s mind. Mitchell was hospitalized for a brain aneurysm in 2015.

“The epic story we’ve all witnessed of her learning how to walk again and really communicate, I think it will be pretty deep,” Wainwright told the CBC ahead of the tribute.

Despite previous ailments, Mitchell appeared to be in good health and spirits during the celebration, a welcome sign to those in attendance.

“She is still, and always, Joni,” Taylor, a longtime friend and musical collaborator told the CBC. “That energy, it continues. She’s a world treasure. I know she’s a national treasure if you’re Canadian — and you’re absolutely right to be proud of her — but she belongs to the world.”

During the gala, Mitchell also received a number of birthday messages from musicians and actresses who took inspiration from her music.

Peter Gabriel, appearing via video message, praised Mitchell for giving the world “melodies that would sparkle like jewels on a trampoline, jumping all around with movement and freedom in composition,” he said. “I pity the poor bastards who have to try and sing them in front of you tonight,” he added with a laugh.

A personal message from Rosanna Arquette that appeared on the inside of the concert program called Mitchell a “brilliant artist and said “her music defined the feeling of being alive for me, for oh these many years.”

Mitchell didn’t speak to reporters, but she did take to the stage to accept a birthday cake, where she received a “happy birthday” serenade from the entire audience and fellow musicians on stage. While she was on stage the crowd also belted out “Big Yellow Taxi”

Known for classics such as “Both Sides” and “Big Yellow Taxi,” the Saskatoon-raised musician has recorded 19 studio albums and won nine Grammy Awards, including a lifetime achievement award in 2002.