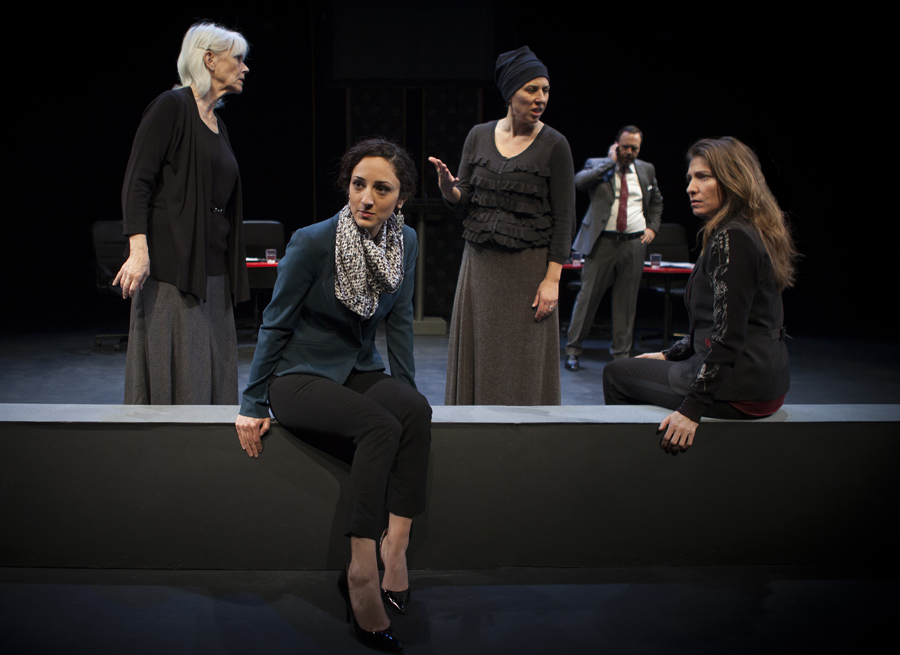 It almost sounds like the setup to a punch line: “An Orthodox Jewish leader, an excommunicated nun, a Muslim lawyer and a lesbian atheist walk onto a debate stage …”

Except, this is no joke. In the Dora-nominated play Unholy, by Canadian playwright, actress and screenwriter Diane Flacks, four women from different ends of the religious and professional spectrum gather to debate the weighty question of “Should women abandon religion?”

“It’s funny because I’ve been thinking about religion and its effect on the world for a long time,” Flacks, who attended Hebrew parochial school as a child, told me during a recent interview. “In later years [it] made me question so much. And [all the] large forces that get away with oppressing people for no other reason than because God said it’s okay, now more than when I wrote the play, just feel like they’re rearing such an ugly head and need to be tackled.”

The playwright, whose resume includes writing for TV series’ like Kids in the Hall, for which she earned two Emmy nominations, Working the Engles and Baroness Von Sketch Show, notes that, “one of the biggest questions I had about it was why do people have faith?”

That question came to the fore a few years back when she spent time with her son at Toronto’s Hospital for Sick Children, where she met another mother whose son was quite ill. “She was Catholic. And I just didn’t understand how you could possibly believe in God in a situation where children are suffering. And that’s what made me kind of jump off the agnostic fence because I thought, ‘This is real, [to pray is silly] and the idea that God cares is silly.’

“But then I met these really credible, interesting, thoughtful people who either still believe in their religion or believed in prayer and God and I found it fascinating. So I came from a base of religion, I rebelled against it and it would have been easy for me to write a play just about rebellion. But what was more fascinating to me was the women who I felt were credible and feminist and really forward-thinking and progressive who still held on to the idea of faith and religion.”

And so the seeds of Unholy were planted and, after hit runs at Toronto’s Nightwood Theatre between 2016 and 2018, the play arrives at Zoomer Hall for four exclusive performances from November 16-18 — the first two of which are already sold out.

Set during a television debate, the four female leads — including Flacks herself — tackle the intersection of religion and feminism with balanced insight and cutting dialogue that skilfully manages to ensure that no one on any side of the argument feels left out or misrepresented. And Flacks doesn’t stop there, digging into the backgrounds of her main characters to explore the pivotal moments in their own lives that helped shape, and continue to challenge, their personal views on faith and feminism.

“I was looking for the issues that are the most outrageous, the most upsetting to anybody of any different religions and I think it started to really narrow into this argument about how [do] you defend religious rights when they’re in conflict with women’s rights? And who wins? As these characters started to become real people I found that they each would have a specific kind of issue that was [fixating] them … an origin in some kind of fierce moment of cognitive dissonance that each of them had. So I was able to focus the debate more on those kinds of things.”

Written before Donald Trump’s presidency, Flacks continually updates the play’s cultural references, shifting from comments about Harvey Weinstein to commentaries on Supreme Court Justice Brett Kavanaugh. “But,” Flacks warns, “I don’t want to give that stuff too much oxygen because the kind of larger issues in the play … were relevant when I wrote them and are relevant now.”

And not only is Unholy being staged at Zoomer Hall, but those performances are being taped to air on VisionTV (a ZoomerMedia property) – an added bonus that elevates the aesthetic and authenticity of the production.

“The play was written as if it was a live debate filmed for television. And what I’m really excited about is that we’re going to get to talk to camera as well as the audience, which I knew would happen in a debate,” Flacks says. “What I think we have the opportunity to do now is for the camera to focus on people’s reactions too, when they’re not speaking … because that’s where so much of the story happens and you’re covering up, trying not to show that you’re affected but you clearly are. And that’s really intriguing to me.”

Of course, it’s not only the players that get in on the debate. At the beginning of the play the host polls the audience to see which side of the argument they think they’ll agree with, and then polls them again later in the show to see if their opinions have changed. Flacks notes that some audience members are more willing to cheer for opinions they agree with during the show, when the attention is on the stage, but remain silent during the audience poll, while others admit to leaving the play with a different opinion on the topic than they came into it with. “That’s what I hope for,” she adds. “My [16-year-old] son came to see it and he said that he changed his mind. What he appreciated was that airtime was given to everybody’s opinion so that nobody was dismissed.”

And that’s, in a way, the whole point — not to make you change your mind or convince you that one side of the debate is right or wrong, but to implore audience members to seriously consider their own convictions and then listen to what the other side has to say.

“Part of what I started to feel in writing it is we have a lot of commonality and a lot of difference between all these people. It sounds hokey but I do feel like a certain level and kindness and love is going to break through all this stuff,” Flacks says. “We are so afraid of each other and we’re so afraid of losing that I’m hoping that being able to air things and to see that where the play goes to at the end will help make people aware of the pointlessness of [fighting about stuff] … I never want to prescribe what I want an audience to think. I’d rather just have them go, ‘Huh, now what do I think?’ It’s always interesting to me to hear what someone walked away with.”

Tickets for Unholy are available for performances on Saturday, November 17 at 7:30pm and Sunday, November 18 at 7:30pm. Click here for more information and to purchase tickets.