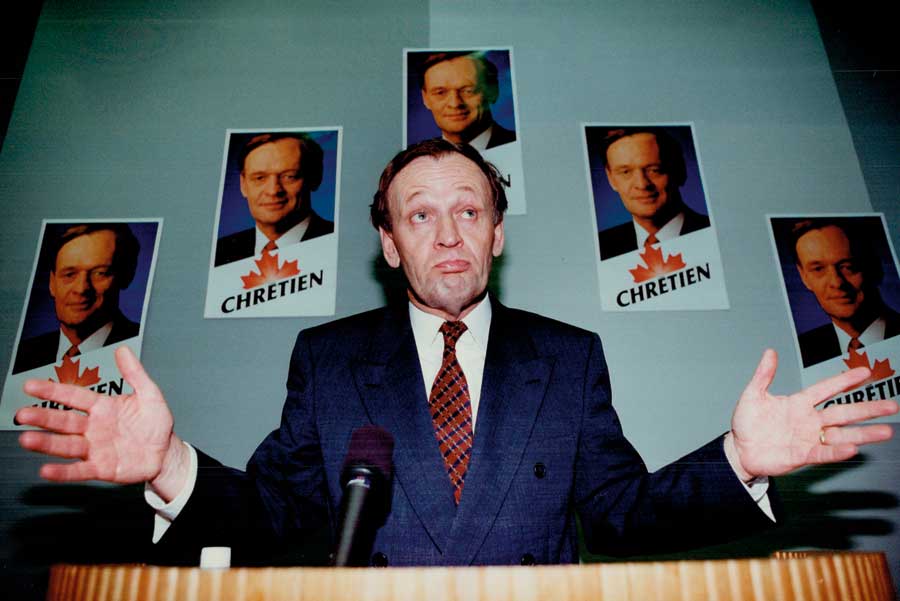 This past October marked the 25 years since Jean Chrétien was first elected as prime minister. In his new book, Jean Chrétien: My Stories, My Times, he reflects on his political career that spanned five decades, recounting with his trademark humour intriguing and entertaining behind-the-scenes anecdotes from his youth, his time at 24 Sussex and his post-political career.

Amazingly, Chrétien, 84, actually hand-wrote the chronicles, which lends them an authenticity you don’t often find in political chronicles. You almost get the sense you’re relaxing after dinner while le p’tit gars de Shawinigan, glass of wine in hand, regales you with his favourite memories.

Zoomer spoke with the former prime minister by phone from his Montreal law office where he still works every day.

Peter Muggeridge: What prompted you to write this book?

Jean Chrétien: I have so many stories from my political life, and my grandson said, “Why don’t you write them down?” One night, I decided to do that, and eventually I wrote 49 chronicles. It was pleasant because when I was fed up with the nonsense of listening to [Donald] Trump, I went to my table and regained my serenity with my pen and memories.

PM: Was it difficult to choose which anecdotes made it in?

JC No, I was just relying on my memory. I would sit at the table and say: “What the hell am I writing about this week?” There was no planning to the book. It’s just my chronicles. PM I don’t want to spoil the best stories but I must ask you about the time you filled in and sang the national anthem for the Queen in Yellowknife.

JC It was kind of embarrassing for me to sing it in front of 3,000 people – and in French, which nobody spoke up there. My wife, Aline, was embarrassed, and I was sweating, and the rest of the crowd were laughing. But I enjoyed it and I said to the Queen: “Very few of us have been soloists for the Royal Family, Your Majesty.” It was not the most harmonious [rendition].

PM You wrote in the book: “We know when we go into politics that we have to live with our decisions for a long time.” What are some of the accomplishments you’re most proud of?

JC Everyone asks me which one was the best. That depends on the mood you’re in that day. I was involved in so many different things – saying no to the war in Iraq – but I had more enjoyment creating [10 new] national parks, things like that, that nobody knows about. But it’s very difficult to decide which accomplishment was the best. I don’t like to choose. You read it and pick the one you prefer.

PM Is there any decision you made that you’d like to do over?

JC Of course, but there’s nothing I can do about it. I don’t spend time thinking about things I should not have done. When you’re in public life, there’s a lot of things that happen, and you think: “Perhaps I should have taken a different course.” But you cannot lose time on that. Especially in politics where you’re always on the go. You wake up in the morning, and there are always new problems. You have the feeling that when you fill a hole, there are two other new ones to fill. Politics is like skating on thin ice; you never know when you will be gobbled up and disappear. I survived more than 13,333 days living that life.

PM You have a chapter called “My Rock of Gibraltar” that refers to your wife, Aline. Can you explain what she’s meant to you over the years, not only when you were serving but also in retirement?

JC We celebrated [in September] 61 years of marriage. And you know, we’re still in love, so what more can I say? We’re happy, and I hope that will last as long as possible.

PM How’s your health? Do you think you could still run up the steps to your office in Parliament?

JC I don’t run up the steps anymore. I use the elevator. My health is very good. I’m 84 this year so I’m not a kid anymore. But I still play golf and I still swim and I still walk. I think I’ve stopped skiing, but I’m not sure yet.

PM Besides writing the book, how have you occupied yourself since you retired from politics in 2003?

JC I am a senior adviser in the biggest law firm in the world – Dentons. They call me when they want to use my experience and my connections. I was a minister in eight different portfolios and I know a lot about public governance. I arrive in the office at 9 a.m. – if I arrive later than that, I feel terrible. When I go home at the end of the day, I enjoy life. Reading and, last year, a lot of time writing.

PM You once said: “I will always be a politician.” It’s now been 15 years since you left office – do you still get a buzz out of politics?

JC Of course, I’m watching politics and when people call me to ask me my views, I’m happy to discuss. But I’m not preoccupied with politics – it’s not my job anymore. And I don’t want to be a Monday morning quarterback or the mother-in-law.

PM Your support of free trade helped U.S. President Clinton pass NAFTA through congress. Watching the frustrating free trade negotiations going on today, do you have to fight the urge to get involved?

JC It’s not my business. As I wrote in the book, if they change one comma in the deal, Trump will say: “It’s the best change to occur since the foundation of America.” It is frustrating, but he will sign something. As I say, you cannot undo an omelette; you cannot put the egg back in the shell. The auto pact was signed in 1965, long before NAFTA. And it has worked very well for both countries.

PM How would you have handled a leader like Trump?

JC Oh, I don’t know. I don’t want to spend time thinking about that.

PM You write about using humour as a political weapon. Do you think that’s a trait lacking in the current political debate?

JC The cold truth is difficult to swallow at times. But if you put sugar on it, using humour for example, it makes it easier to swallow. You’re dealing with human beings, not computers.

PM You devote a chapter to Pierre Trudeau. What kind of boss was he?
JC He was a good boss with me. It was a very good relationship – I just did my job and didn’t bother him. He thought I was doing good work because he kept moving me from one job to another. We never shouted at each other, ever. He never threatened to kick me out, and I never threatened to resign. Do you and Justin ever talk politics?

JC Once in a while. But I tell him: “It’s your show. You run it.” He has my number and he can call me whenever he wants.

PM But I imagine he would want to draw on your experience.

PM What do you think of Doug Ford’s threatened use of the notwithstanding clause in his battle to downsize Toronto city council?

JC It is very unusual. When you fool around with the Charter of Rights, you will eventually pay a big price. But, again, I’m not a Monday morning quarterback.

PM Explain why you feel that democratic institutions seem to be under assault around the world.

JC When I was there 15 years ago, there were new democracies coming out every year. We saw the evolution of governments in Europe that were all moving in the right direction: Hungary, Poland, Czech Republic and so on. Suddenly, you see a shift backward. The European Union is more or less suspending Hungary from participating in debate because of the way they handle their democracy. It’s not good news for a democrat like me.

PM Do you think democracy is salvageable?

JC Always. You know, in politics everything always looks terrible until you look at it 20 years later. Many mornings, as prime minister, when I got up, the news wasn’t that good. I would tell my staff: “If you have good news, give me two. If you have bad news, give me nothing.”

PM Why did you choose Joe Clark, an old political foe, to write the foreword to your book?

JC We were opponents but not enemies. We had some scrapes but we always respected each other. At times, I was not happy with him, and other times he was not happy with me. But it’s like playing hockey: if a guy boards you, you remember and you board him the next time. And after that, you go have a beer with him.