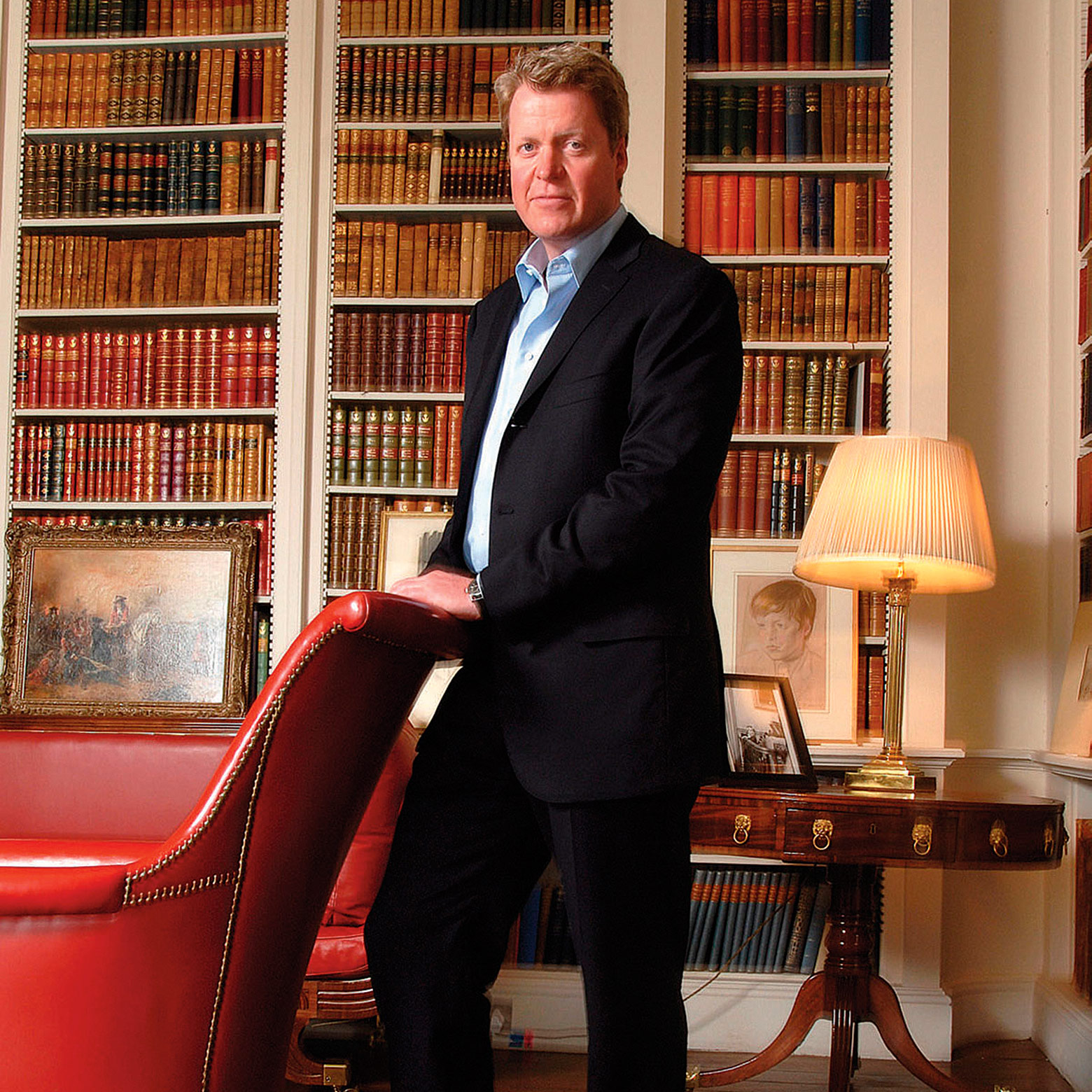 Charles, 9th Earl Spencer, unveils the latest collection of furniture from Althorp Living History, a line inspired by pieces from his ancestral home.

Charles Spencer is exhausted, but he isn’t letting it show.

We’re standing off to one side of the Kennedy Galleries showroom in Toronto on an unseasonably hot evening in May. It’s only four days after the Royal Wedding, and he tells me that, by evening’s end, he’ll have travelled from California to Toronto and back to London within a 24-hour window. Yet, he appears remarkably lively for a man running on only a few hours sleep, eyes alert and a glass of white wine held precariously at the base with two fingers. I catch myself wondering about his secret to staying attentive in the face of so many strangers despite the jet lag. Cracking a smile, he says, “I didn’t realize this event would be one of two highlights of my week.”

Although the nuptials of his nephew Prince Harry and Meghan Markle is on the tip of everyone’s tongue, Charles, 9th Earl Spencer, makes only fleeting references to a “happy occasion” when prodded for details. He’s actually on hand to discuss other matters, namely the Althorp Living History furniture collection. A new collection of the line will be released in October in anticipation of its 15th anniversary milestone in 2019. The line is inspired by pieces from his family’s renowned estate in Northamptonshire.

Situated approximately an hour and a half outside London, the 90-room property is also the final resting place of his sister, Diana. This thought brings to mind Charles’ fiery eulogy at her funeral in 1997, which you may recall planted a flag for her Spencer heritage. “Diana … proved in the last year that she needed no royal title to continue to generate her particular brand of magic …” Most controversially, he also pledged to her memory, “That we, your blood family,” would continue to raise her beloved sons in the manner she had desired “so that their souls are not simply immersed by duty and tradition but can sing openly as you planned.”

Now 21 years later, resplendent in a black suit and royal blue paisley tie, the 54-year-old Lord Spencer cuts a striking figure, standing head and shoulders above everyone in the room. As we chat, I notice he has the tendency to lean in slightly when talking, lending a conspiratorial air to our conversation. He also gives you his undivided attention, eyes never wandering around to scan the room until our tête-à-tête has concluded. It’s a skill that probably served him well in his years as an on-air correspondent for NBC Nightly News and The Today Show. It could also be surmised that such charms led to his three marriages and seven children, but I digress … My brush with the aristocratic Englishman was short-lived as people started closing in on us, eager for their own chance to mingle with a bona fide earl.

And why not? Such an encounter is the perfect cocktail party anecdote given the current obsession with all things British. No doubt this renewed interest began with the international successes of Downton Abbey and The Crown, ramped up with the Queen’s Diamond Jubilee, and further amplified by the Royal Wedding of Prince William and Kate Middleton in 2011. Similar marriage mania took hold when Harry announced his engagement to Meghan, whose wedding was also “must-see” TV. Lord Spencer and his current wife, Canadian-born Countess Karen Spencer, made their own grand entrance at Windsor, but it was his children from his first marriage who turned heads. His 27-year-old daughter, Kitty, wore a gorgeous floral Dolce & Gabbana gown (she’s a “friend” of the brand who regularly walks the runway for the label). His son, Louis Spencer, Viscount Althorp, made his own dashing appearance with his movie-star-handsome looks, and the rabid British tabloids wasted no time in decreeing him the most eligible royal now that Harry is off the market.

The Spencer and Windsor families were enmeshed long before Charles married Diana. Their grandmother was the Queen Mother’s lady-in-waiting, and Diana originally met the prince while he was dating her eldest sister, Lady Sarah McCorquodale. The other Spencer sibling, Lady Jane Fellowes — whose husband was the Queen’s private secretary — represented the Spencers at her nephew’s wedding — giving a reading and standing with the family to wave the couple off on their carriage ride through Windsor.

But now, it’s all about Althorp. The imposing estate with its cavernous rooms and lush gardens has been the home of the Spencer family for a remarkable 19 generations. Purchased in 1508 by John Spencer (who was knighted by King Henry VIII in 1519, likely for services rendered as sheriff and for funding the parish church), the sizeable plot of land was procured with money generated from the family’s prosperous sheep-rearing business. The Spencer peerage (created in 1765) also boasts the earldom of Sunderland and the Churchill barony, making Diana Spencer and former Prime Minister Winston Churchill the most prominent members of the family. (So what exactly is a peerage, you ask? Briefly, it’s a legal system composed mostly of hereditary titles that until 1999 entitled more than 92 such families to sit in the House of Lords.)

“I used to visit there with my sister, Diana, and my other siblings, and we were always slightly terrified of going there because my grandfather was very old-fashioned and extremely fierce,” he tells me of his early memories of Althorp. “I remember being told before we arrived that we mustn’t touch anything or do anything — you know, don’t exist. It was safer to be out of doors, really.”
Despite this less-than-ideal introduction to the estate, however, the eventual 9th Earl Spencer grew to love that stately pile of bricks.

Among his bestselling books, six so far, he even wrote, Althorp: The Story of an English House, dedicated to its rich history. Having inherited the grand 13,000-acre property at the age of 27 after the untimely death of his father, at 68, Lord Spencer faced the dilemma that Downton Abbey fans will recall befell the Crawleys.

“My father died very young and, toward the end of his life, the man in charge of maintenance went to see him and told him the roof’s had it. My father said, ‘Well, I think I’ll leave that to Charles,’” Lord Spencer recalls. “I’ve also done the rewiring, the plumbing and all the heating. And that’s just in the last 26 years.”

So he had to raise revenue and began welcoming tour groups, weddings and temporary exhibits. If you were to visit the property when it’s open to the public, you’d be greeted by a beautiful limestone facade. “The original house was built in Tudor redbrick style,” he says. “But in the 1780s, there was a bit of a tyrant who came on the English country house scene called Capability Brown [real name: Lancelot Brown, the landscape architect], and he decreed that anyone who had red brick was, frankly, very vulgar. So, obeying the fashion diktat at the time, it was replaced with limestone tiles.”

One wonders what Brown would have made of the world of furniture reproductions, which Lord Spencer became a part of when the company Theodore Alexander approached him. After looking around the house, “they reappeared three days later with 10,000 images of pieces they wanted to work with. I’d had no idea there was so much potential for a collection.”

Fortunately, Lord Spencer’s late grandfather, Albert Spencer — he of the aforementioned fierce temperament — left a parting gift. “I was incredibly grateful when I discovered, among the many volumes in the library, two massive albums,” Lord Spencer recalls. “There were photographs of every item in the house. So we know with every piece of furniture in Althorp who commissioned it, who made it, how much it cost and which rooms they’ve been in.”

The collection includes the ornate Washington Chest, the plush Althorp Wingback and the delicate Butterfly Table, all tagged with a certificate of authenticity. In all, the line is made up of hundreds of hand-tailored pieces in the style of the 17th, 18th and 19th centuries.

As for Lord Spencer’s favourite piece in the line, he hesitates for only a moment before choosing the show-stopping Secretary Bureau Cabinet. “It’s a very intricate chest of 120 little drawers with a sort of bureau on top,” he says, launching into another trip down memory lane. “The original is in the King William Bedroom, which is the main guest bedroom at Althorp. I remember when we were children, my father would hide a coin in one of the drawers, and we’d have to guess which one it was in. It has a special link to my childhood.”

Decades later, thanks in part to lavish pieces like the secretary, the pitfalls of funding Althorp have eased considerably for Lord Spencer. “I think it comes down to the fact that the pieces are really beautiful — and I can say that because I’ve had absolutely nothing to do with the design,” he laughs.

It’s time for speeches at the Kennedy Galleries. Lord Spencer sets down his glass of white wine on a replica of the stunning Grand Staircase bureau — so beautiful it was that I had to restrain myself from grabbing a coaster to place under his glass — and takes the microphone to wax poetic about his partnership with Theodore Alexander.