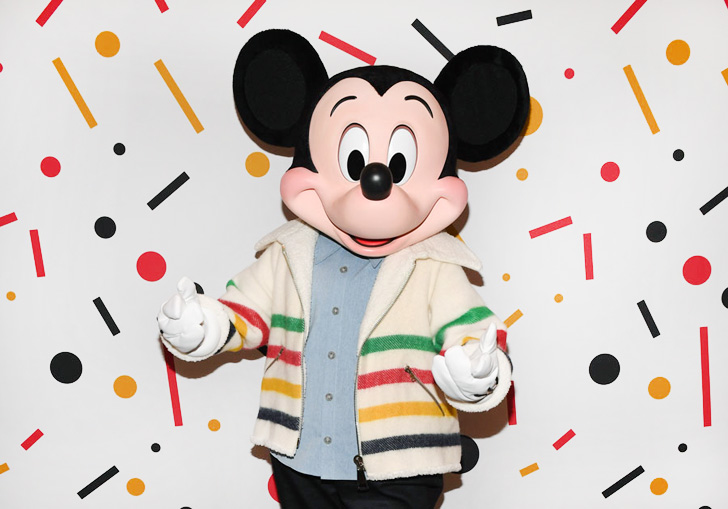 Judging from his attire alone – red high-waisted shorts, ugly clunky yellow shoes and four-fingered white gloves – he makes for the most unlikely style icon. Yet, Mickey Mouse has been wholeheartedly embraced by the fashion world, serving as muse and inspiration to many of the world’s top designers, retailers and brands. His lengthy list of unabashed fans includes Marc Jacobs, Jeremy Scott, Gucci and Coach.

The anthropomorphic mouse with the ever grinning face and iconic circular ears has gained cult status within this cool grown-up crowd, his mug emblazoned on many a t-shirt sported by supermodels and pop stars alike.

His figure may be diminutive but the roar you heard around the globe this week is the celebrations surrounding his milestone 90th birthday at various Disney parks. Fans came out for the big bash in droves, where reportedly at Disneyland Japan, they waited in line for 11 hours to meet him. Here in Canada, he made an appearance at Hudson’s Bay flagship store in Toronto on Queen Street West. HBC President Alison Colville, along with the company’s fashion specialist, Jessica Mulroney, with her daughter, Meghan Markle-wedding-attendant Ivy, unveiled a collection of HBC x Mickey Mouse merchandise and presented the icon with a jacket – specially made for him – featuring the iconic blanket stripes.

It’s safe to say, when Walt Disney and animator Ub Iwerks debuted him in the 1928 cartoon Steamboat Willie, they could never have dreamt, nine decades later, this little mascot would also be a fashion icon. Especially since the birth of Mickey Mouse almost didn’t happen.  When Disney had a fallout with Universal Studios over a prior cartoon character, Oswald the Lucky Rabbit, the two companies parted ways with most of the staff joining Universal. Disney created his own studio, with just a handful of loyal employees who remained and they eventually came up with a mouse character, which they originally wanted to name, Mortimer Mouse. Ultimately, they settled on Mickey and the mouse with big ears not only went on to become the mascot of a global Entertainment empire but also a significant cultural icon of Americana.

But why is this cartoon character a chic commodity in fashion? It’s one of the same currency used by the Walt Disney company today – shilling nostalgia. The instantly recognizable face of Mickey Mouse stirs memories of happy-go-lucky days and innocent childhoods. He transcends age. He’s relatable regardless of gender or cultural background. Even when he is stripped down to a basic line drawing of three circles – a head and two ears – it’s serves as a logo which represents joy, not unlike the Smiley face. And that’s a commodity everyone is seeking in these troubled days.

We look at a few of the brands celebrating the joys of Mickey Mouse on his 90th anniversary.