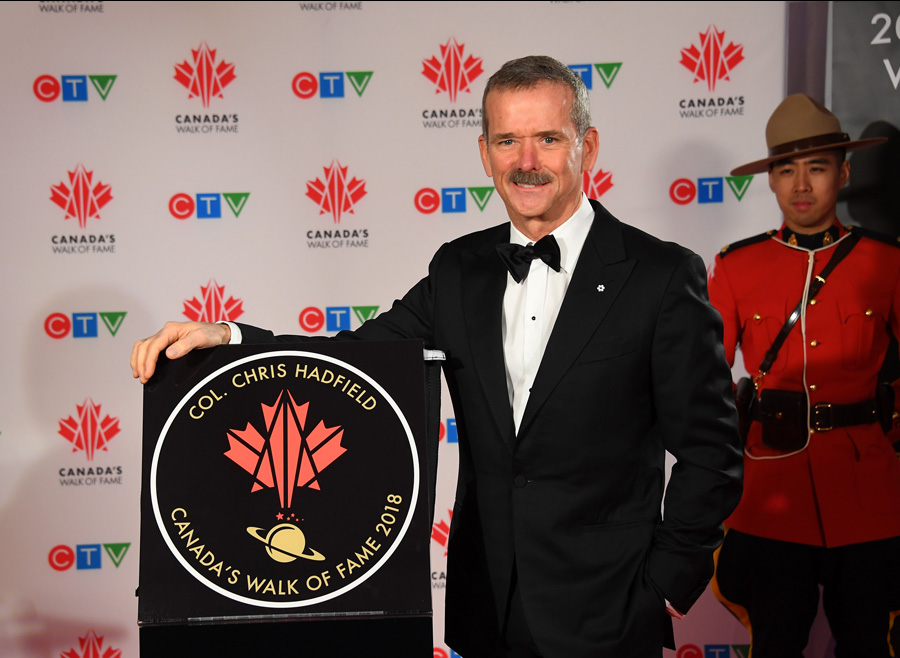 Just two days before Quebecois astronaut David Saint-Jacques launched into space to begin the next chapter of Canadian space exploration, one of our nation’s most famous space men, Col. Chris Hadfield, the first Canadian to command the International Space Station, had his name enshrined back on Earth alongside the latest inductees into Canada’s Walk of Fame.

“I’m an engineer, I’m a test pilot, I grew up on a farm and [Canada’s Walk of Fame’s] just not what you imagine for yourself,” Hadfield, 59 told ET Canada ahead of the ceremony. “But when I see the flip side of it, how important inspiration is for people deciding what they might do in their life, and how important other people’s actions were to inspire me to think beyond the farm that I grew up on. So I see the loveliness of being in that role now, in this stage of life.”

In its 20th anniversary year, the 2018 Canada’s Walk of Fame inductees, “represent the organization’s five pillars of recognition: Sports and Athletics, Philanthropy and Humanities, Arts and Entertainment, Business and Entrepreneurship, and Science and Technology.”

The American-born Martin, who told the Canadian Press that she got her Canadian citizenship in 2017 so she could receive the induction, added, “It was very impactful and humbling. It was beautiful. This honour is for high achievement and I would say if being Canadian means I get to have this star, then I feel very lucky.”

Martin’s Canadian roots, however, date back to her earliest career breaks, including a famed stage production of Godspell and her time on SCTV. In 2014 she told Zoomer that, “Everything that was important in my life began in Canada. My career really started there, and I got married to a Canadian, and my kids were born in Toronto. I have a place there that I bought a few years ago, and I lived there [before that] for 18 years.”

Meanwhile, Andy Kim noted to the Canadian Press that the induction served as the end result of the encouragement he received from his parents – Lebanese immigrants – to pursue his passions.

“Being Canadian is a very positive thing and I’m very grateful that I was born in Canada,” he said. “They made me realize I could have a dream and never let it go — that’s Canada to me.”

And aside from enshrining names on Canada’s Walk of Fame, the honour includes another Canadian hallmark — charity.  Along with their induction, $10,000 per inductee will be donated on behalf of the honouree by the Walk of Fame to a charity of their choosing.

Click here for more information on the 2018 Canada’s Walk of Fame inductees.