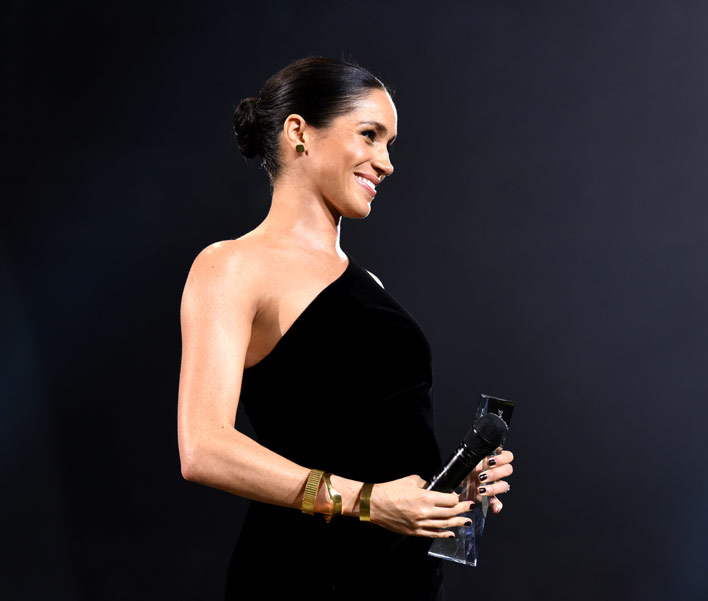 Meghan, Duchess of Sussex on stage during The Fashion Awards 2018 on December 10, 2018 in London. Photo: Joe Maher/BFC/Getty Images.

What bad press? After weeks of a near-constant barrage of negative reports circulating in the media — she’s too demanding, she’s too needy, she’s fighting with Kate! — the Duchess of Sussex effectively silenced all naysayers with a glamorous surprise appearance on Monday night at the British Fashion Awards.

With her hair pulled back in a sleek bun, the beaming 37-year-old mom-to-be looked absolutely radiant in an asymmetrical black Givenchy gown as she took the stage at Royal Albert Hall in London to present the British Designer of the Year Womenswear Award to Clare Waight Keller for Givenchy. Name sound familiar? That’s because Waight Keller also created Meghan’s showstopping wedding gown for her May 19 nuptials to Prince Harry in Windsor.

The designer even personally thanked Meghan in her acceptance speech at the star-studded ceremony.

“This woman is so amazing,” Waight Keller, 44, said. “I got to know Meghan on such a personal level. To have someone like that trust you on such a personal moment in their life … I can’t thank you enough because it was the most beautiful moment.”

No stranger to fashion forward moments herself, Meghan even broke another “unofficial royal rule” at the ceremony, as eagle-eyed royal watchers were quick to point out. Yes, that was — gasp! — black nail polish on the duchesses fingers.

While Meghan likely chose the colour simply to coordinate with her one-shoulder black dress, it’s widely known that the Queen finds colourful nail polish distracting. Although bright hues are not officially banned, nude colours are deemed more appropriate for royal engagements. One need only look at snaps of Her Majesty or Kate to know that pale pinks and nudes are the preferred choice for the House of Windsor.

The Queen has been using bottles of Essie Ballet, a pale pink polish, since 1989 when her then-hairdresser wrote to founder Essie Weingarten and said it was “the only colour Her Majesty would wear.”

Although Meghan has quickly adapted to many of the royal dos and don’ts — even donning pantyhose when attending to royal duties — we shouldn’t chalk up her nail polish choice to just another “rookie mistake.” Think of it more as a little mini rebellion, perhaps?

The duchess “has found certain rules in the royal household difficult to understand, like the fact that the Queen prefers women in dresses or skirts rather than trouser suits, and is often asking Harry why things have to be done in a certain way,” a source told People. “I think she finds it a little frustrating at times, but this is her new life, and she has to deal with it.”

In the grand scheme of things, however, do painted nails really rank as a broken “royal rule”? We think not, especially when the expectant duchess was positively glowing and handled her on-stage duties with class. As Cosmopolitan pointed out, black is a winter colour — and they look great!