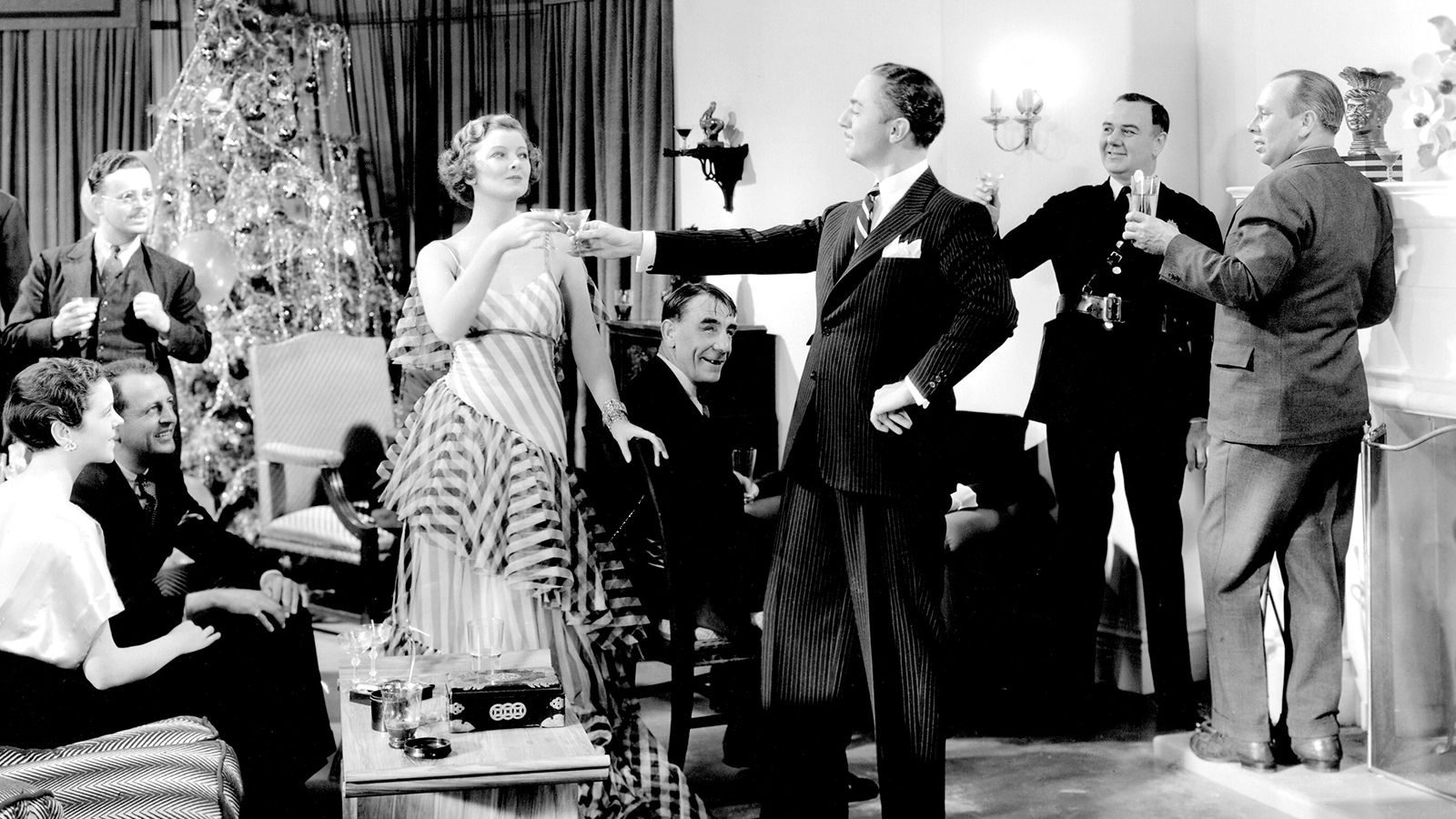 Everyone has a favourite beloved Christmas classic. Expand your repertoire with our alternative list of the mistletoe movies you probably forgot were holiday classics.

Christopher Plummer plays one sort of villain this Christmas: he replaces ousted Kevin Spacey as the skinflint in Ridley Scott’s upcoming Getty kidnap drama All the Money in the World. In the 1978 sleeper classic The Silent Partner, Plummer plays a sociopath with blistering menace. And Toronto plays itself. Written by Curtis Hanson, this clever and truly suspenseful thriller was filmed on location around the city, including scenes in Cabbagetown, on Captain John’s at Queen’s Quay, in the Silver Dollar, on the subway and several key sequences in the gleaming newish Eaton Centre.

The fictional First Bank of Toronto on the mall’s lower level is home to seemingly mild-mannered teller Miles (Elliott Gould, in his Long Goodbye period). Violent criminal Harry (Plummer, in eyeliner and several kinds of drag) plans to rob the bank deposit. When the heist goes awry, the dangerous cat-and-mouse game culminates with an escalator chase in the crowded shopping mall. Look out, kids—Santa’s got a gun! The executive producer is impresario Garth Drabinsky, Susannah York and sweet young John Candy are Gould’s colleagues, and the score is by Oscar Peterson.

See also: L.A. Confidential (dir. Curtis Hanson, 1997), Hanson’s other neo-noir set during, but not about, Christmas that’s as much of a love letter to classic Los Angeles as Michael Connelly’s Harry Bosch.

You already love: Christmas in Connecticut

A Manhattan murder mystery where solving the crime is almost beside the point, Dashiell Hammett’s detective story The Thin Man originally appeared in the December 1933 issue of Redbook magazine, the same month the U.S. repealed Prohibition laws. Where that story was hard-boiled and lonely, the film version is upbeat and effervescent. (And boozy: Don’t dare try to keep up with their copious cocktail consumption.) It was co-written by married writing couple Albert Hackett and Frances Goodrich (Easter Parade, Seven Brides for Seven Brothers), who lighten the mood considerably with an affectionately zany married couple, early screwball elements, one-liners and martinis. It was released the following spring to boffo box office and was nominated for four Academy Awards, including Best Picture, but lost that title to another underdog of 1934: It Happened One Night.

The fizzy film was an unexpected hit due in part to the gleeful drinking and vicarious experience of wealth just after repeal and while the United States was five years into the Depression. Nick and Nora, who live in San Francisco, are in New York to do some Christmas shopping at Lord & Taylor’s and Saks. But it’s the perfect comedic timing between urbane stars Myrna Loy and William Powell, with their adorable terrier Asta (who also plays the pooch in Bringing Up Baby) in tow in tow that made movie magic. Now, Nick and Nora Charles are not the first domestic sleuthing couple—Agatha Christie created talented amateurs Tommy and Tuppence Beresford in 1922, a decade before Hammett paired his former playboy Pinkerton with a Nob Hill heiress. But it’s inspired just as many variations: reboots like Peter Lawford and Phyllis Kirk on NBC in the late 1950s, as well as imitations like Sidney Sheldon’s Hart to Hart. Even Thin Man spoofs are memorable, like Maggie Smith and David Niven’s thinly-veiled turn as Dickie and Dora Charleston in Neil Simon’s Murder by Death. It also inspired five sequels—the first, The Thin Man Goes Home, picks up on New Year’s Eve where this one leaves off, hence TCM’s annual NYE marathon of the films.

The parents are just as absent in director Whit Stillman’s 1990 debut but there’s no slapstick or pratfalls — the deadpan comedy here is all verbal. Set during Christmas break among a preppy Manhattan college set—or UHBs, as this urban haute bourgeoisie prefers to call itself—it moves between the front steps of The Plaza and Upper East Side living rooms, where “snobbery is looked down upon” without a trace of irony and, as cocky Nick (Chris Eigeman) later declares: “The cha-cha is no more ridiculous than life itself.” This movie is essential to truly understand where Wes Anderson and Noah Baumbach got some of their moves.

Into this clique wanders Tom (Edward Clements), an outsider in a rented tuxedo who gets conscripted as an escort to the series of winter debutante balls and parties. The know-it-alls have heated discussions about honour and loyalty, with Audrey (Carolyn Farina) ardently defendingJane Austen, and Charlie (Taylor Nicholas) taking on French social theory. All the while guileless Tom remains oblivious to an emerging love triangle. Stillman once told me he hoped it would become a Christmas classic alongside favourites like The Shop Around the Corner. Not only one of my favourite films, period, this eminently quotable character study is also my quintessential holiday film. “I guess you could say it’s extremely vulgar — I like it a lot.”

See also: Batman Returns (1992), Tim Burton’s mannered Gotham Christmas in which, even for a superhero movie, the imaginative, spellbinding visuals have the feel of an alternate-reality vintage New York.

The Rat Pack throwback stars Sammy, Dino and the boys (Joey Bishop, Peter Lawford, Richard Conte and an uncredited Shirley MacLaine cameo), plus Angie Dickinson and Red Skelton as himself. Their plan is to knock off all five of the majors on New Year’s Eve and if the premise has more swagger than suspenseful plot — it’s all cigarettes and highballs and skinny ties — that’s because it was filmed on location before sunrise, with the principals performing nightly at the Copa Room. At the time, star Sammy Davis, Jr. was meant to stay at a separate hotel in segregated 1960 Nevada, something Ol’ Blue Eyes put an end to during filming thanks to his partial ownership of The Sands, the first casino to desegregate. Ocean’s 11 has chemistry to spare and unexpected sentiment and the legendary entertainers do what they do best: entertain. Walking past The Sands and along the original Strip with the swashbuckling gang is a swellegant way to ring-a-ding-ding in a New Year.

You can’t choose your family at Christmas, but you can pick your friends. A group of Cambridge graduates who were once part of an acting troupe reunite at a country house and talk about where life has taken them so far; think a Big Chill, in Britain.

This sentimental auld lang syne is directed by Kenneth Branagh and written by Rita Rudner — and starring both, along with Stephen Fry, Hugh Laurie and Emma Thompson and a slew of holiday weekend histrionics. Arriving in theatres on Christmas Day in 1992, Branagh and Thompson were still a married thespian supercouple, reigning acting as ‘Ken and Em’ at the time. It’s otherwise semi-autobiographical: Thompson had acted in Footlights at Cambridge with Fry and Laurie (they were also part of an early 1980s sketch show called Alfresco that’s streamable on acorn.tv) “There are some friends,” Fry says at the beginning of the movie, before dysfunction takes hold, “you know you will have for the rest of your life. You’re welded together by love, trust, respect, loss or – in our case – embarrassment.”

See also: Un Conte de Noel (2008). Catherine Deneuve is the matriarch of an estranged family – a who’s who of French cinema – who reunite at Christmas for recriminations and revelations.

Try: My Night with Maud

Like Todd Haynes’ magnificent Carol is a snow globe of melancholy, Ma nuit chez Maud is about the dance of two people around one another. Filmed in a wintry French city in crisp black and white, the tale of a former womanizer and newly devout Roman Catholic mathmatician (Jean-Louis Trintignant, from A Man and a Woman) begins at mass on Christmas eve and continues through Christmas dinner at the apartment of his friend Vidal’s occasional lover, the sophisticated divorcée Maud (Françoise Fabian). Eventually, Vidal leaves Jean-Louis with a nudge and a wink to spend the night. In lieu of foreplay, the devout and the worldly hash out their ideas and ideals about love, sex and probability in an intense, all-night conversation that challenges his beliefs, and hers. Released in 1969 as part of filmmaker Eric Rohmer’s six moral fables and Oscar-nominated for Best Foreign Film, it’s a talky, intellectual movie that never feels mannered. It’s an intimate and naturalistic chamber piece and spiritual ancestor to Before Sunrise.

As her faded diva Norma Desmond famously said, “We didn’t need dialogue—we had faces.” This pre-Code comedy of manners is just Gloria Swanson’s third sound picture but it proves the icon of the silent cinema also had a talent for talking while giving side-eye. Swanson, then 32, plays a single gal named Gerry who, on New Year’s Eve, throws over her latest fickle cheating beau and is determined to begin the New Year properly: “I’m starting it with myself!” Gerry is a dress designer, naturally, and lounges around her Art Deco apartment overlooking Manhattan in flutterings capelets and slinky slipdresses; all by longtime Swanson costume designer René Hubert (even her terrycloth robe is chic). Gerry’s independence is relatively short-lived when she falls for clean-cut self-help author Tony (Ben Lyon) and wants to show him she’s an old-fashioned girl. It’s equal parts Sex and the Single Girl and the kind of romantic comedy Kate Hudson used to make.