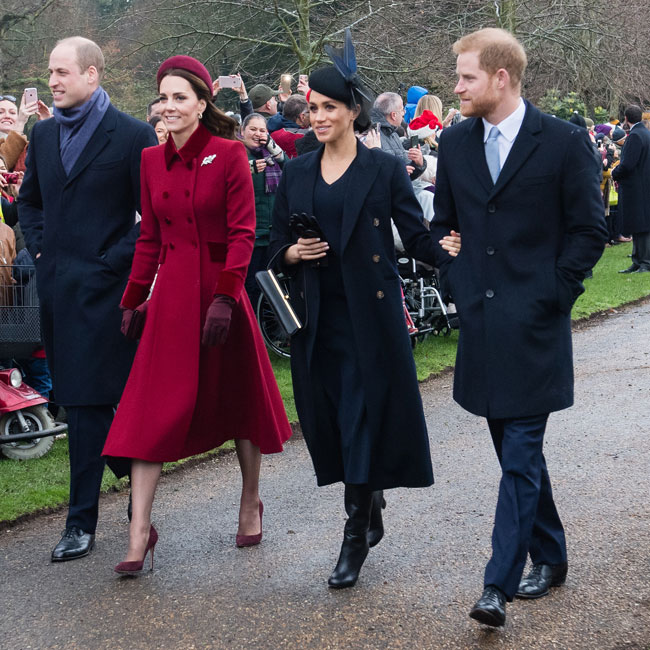 The duke and duchesses of Cambridge and Sussex head to church on Christmas Day. Photo: UK Press Pool/UK Press via Getty Images.

Although two prominent members of the Royal Family were missing — Prince Philip, 97, opted to stay home, while Camilla, Duchess of Cornwall battled a cold — the Windsors were out in full force on Christmas Day.

While the Royal Family attended their annual Christmas church service at St. Mary Magdalene Church in Norfolk on Dec. 25, all eyes were on the younger generation: Prince William and his wife, Catherine, the Duchess of Cambridge, and parents-to-be, Prince Harry and Meghan, Duchess of Sussex.

Meghan linked arms with Harry and chatted amiably with Kate as the couples followed closely behind Prince Charles while walking to church. Despite rumours of strife between the duchesses, Kate and Meghan seemed perfectly at ease with one another. Here’s hoping this finally puts an end to all those negative reports, because it’s all royal pish-posh if you ask me.

The beaming couples greeted the hundreds of well-wishers who lined up for hours along the route surrounding the 16th-century church in the hopes of catching a glimpse of the Royal Family. Their patience paid off as the Royal Fab Four waved, shook hands and received flowers from the crowd.

Kate wore a festive red coat dress with a matching hat, while pregnant Meghan chose a deep navy dress and Victoria Beckham coat. And while the two duchesses are certainly style icons in both Britain and beyond, can we stop for a moment to appreciate how radiant Her Majesty, 92, looked in her lavender and pink ensemble? There’s no such thing as upstaging Her Majesty, that’s for sure!

And for those royal watchers who tsked-tsked at Meghan’s not-quite-right curtsy to the Queen last Christmas (give her a break — she was still new to The Firm!), it would appear that the duchess has since mastered the art of the deep dip, as this image from outside the church went viral.

Ever wonder what the House of Windsor does on Christmas Day? Well, we did a little sleuthing and found out that, after the church service, the immediate family headed back to Sandringham for a turkey roast lunch with all the trimmings, before everyone gathered together at 3 p.m. to watch the pre-recorded Queen’s Christmas Speech on the telly.

As for dinner, there’s no formal sit-down meal for this family: the food was entirely set up as a buffet (think: turkey, ham, parsnips, etc.), which no doubt gave the household staff a (well-deserved) opportunity to kick up their heels and enjoy the holidays too!

As for Her Majesty’s speech this year, she noted that “through the many changes I have seen over the years, faith, family and friendship have been not only a constant for me but a source of personal comfort and reassurance.”

The Queen also emphasized the impact of kindness. “Even with the most deeply held differences, treating the other person with respect and as a fellow human being is always a good first step towards greater understanding.”

It’s been an exciting year for the Royal Family: William and Kate welcomed their third child, Prince Louis, while Harry and Meghan got hitched and announced that they were expecting their first child in the spring. It was also the year that Prince Charles rang in his 70th birthday and the Queen watched yet another grandchild — Princess Eugenie — get married to her longtime beau, Jack Brooksbank. No doubt there were plenty of topics to discuss as the royals spent the holidays together at Sandringham House.