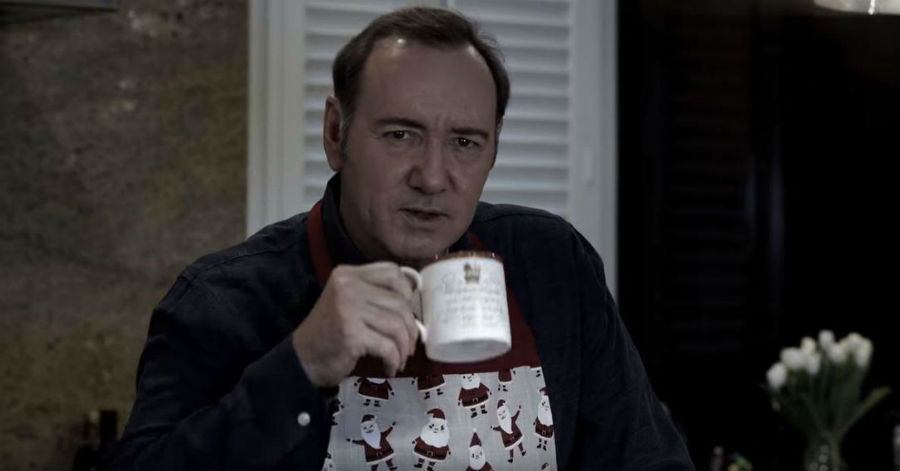 In a bizarre and disturbingly festive Christmas Eve tweet, Kevin Spacey appeared to defend himself against recent sexual assault allegations while assuming his former House of Cards character, Frank Underwood.

The video was made public shortly after a charge of indecent assault and battery against Spacey was made public. The charge relates to allegations that he sexually assaulted the teenage son of a Boston television anchor in a restaurant in 2016.

In the video, which was linked to in a tweet from Spacey that simply read “Let Me Be Frank,” the actor wears a Santa Claus print apron and sips occasionally from a coffee mug while delivering a cryptic monologue in character that appears to refer to the allegations.

“Of course, some believed everything and have just been waiting with bated breath to hear me confess it all,” he says in Underwood’s signature South Carolina drawl. “They’re just dying for me to declare that everything said was true and that I got what I deserved. Wouldn’t that be easy? If it was all so simple? You and I both know it’s never that simple, not in politics and not in life.”

Spacey also appears to compare the evil deeds committed by Frank Underwood – who was killed off at the beginning of the final season in November in response to allegations – to the current charge he faces.

Not surprisingly, the video was met with criticism. Actress and #MeToo activist Alyssa Milano was among those who spoke out against the video, which she called “creepy.”

Actress Ellen Barkin also chimed in, criticizing the comparison he seems to make between himself and the House of Cards character.

“Kevin Spacey is sending a very disturbing message as he chastises his audience,” actress Ellen Barkin tweeted, “if you hypocrites loved me as a murderer, why won’t you love me as a sex offender? Maybe because Frank Underwood’s crimes are fiction and Kevin Spacey’s are not. #LostInSpacey”

In another tweet, actress Patricia Arquette added, “I’m sure none of the men who were kids at the time of their sexual assaults appreciate @KevinSpacey ‘s weird video. No. Just No.”

Anthony Rapp, who accused Spacey of making sexual advances toward him in 1986, when he was just 14, responded to Arquette’s tweet with the hashtag #truth.

Spacey apologized to Rapp after the actor went public with his allegations in October of 2017 but claimed not to remember the encounter.

“I honestly do not remember the encounter, it would have been over 30 years ago,” he said in a statement released via Twitter. “But if I did behave then as he describes, I owe him the sincerest apology for what would have been deeply inappropriate drunken behavior, and I am sorry for the feelings he describes having carried with him all these years.”

Spacey and his representation have yet to make any direct statement about the current charge, but the actor will appear in court on Jan. 7.