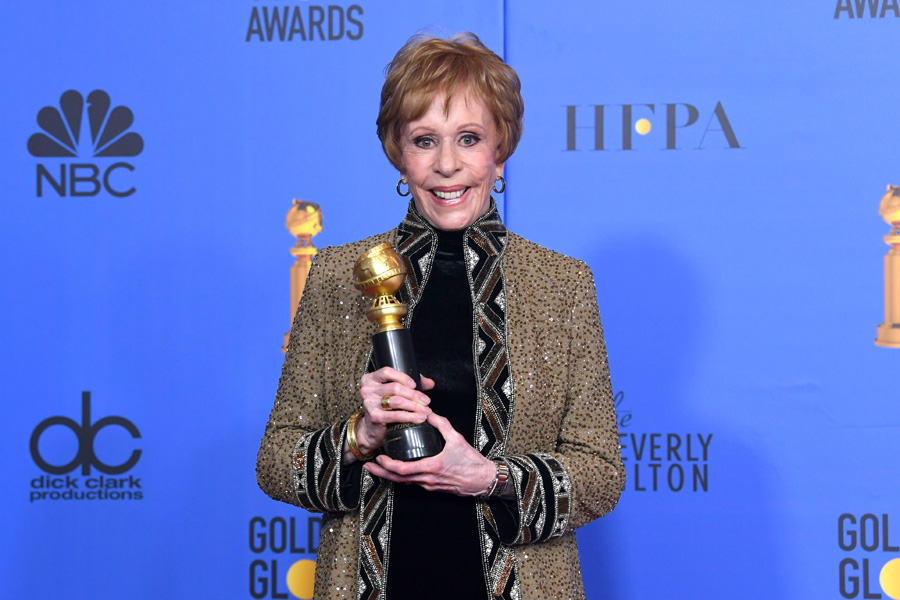 On a night of upsets and unexpected results, it was the 50-plus crowd that kept the audience roaring and viewers riveted at the 2019 Golden Globes.

Many expected the night would belong to A Star is Born, the Bradley Cooper-directed version of the oft-remade classic in which he also stars alongside Lady Gaga. The talk of award season, the film came into the night with seven Golden Globe nominations and surprised many by picking up only one award, Lady Gaga’s Best Original Song honour for “Shallow,” which was among the most predictable categories of the evening.

Instead, at the end of the night, it was Glenn Close, 71, who upset Lady Gaga for the award for Best Performance by an Actress in a Motion Picture – Drama for her role in The Wife, who brought the audience to their feet with a tearfully delivered acceptance speech that touched on themes from The Wife, in which she plays a woman who sacrifices her own dreams for her husband’s success.

“You know, to play a character is so internal and I’m thinking of my mom, who really sublimated herself to my father her whole life,” Close said. “And in her 80s she said to me, ‘I feel I haven’t accomplished anything.’ And it was so not right. And I feel what I’ve learned this whole experience is that women, you know, we’re nurturers, that’s what’s expected of us. We have our children, we have our husbands if we’re lucky enough and our partners, whoever. But we have to find personal fulfillment. We have to follow our dreams. We have to say, ‘I can do that and I should be allowed to do that.'”

The speech capped off an emotional evening of appreciation, which included comedy legend Carol Burnett receiving the inaugural television lifetime achievement award named after her. The honour kicked off with actor Steve Carell taking the stage to introduce the namesake of the inaugural Carol Burnett Award — the television equivalent to the Cecil B. DeMille Award. He began by listing her accolades — “She is the most decorated person of all time in the Golden Globes television category, the first woman to win both the Mark Twain Prize for Humor and the Kennedy Center Honor. She was the first woman to host a variety sketch show on TV, The Carol Burnett Show, which ran for 11 years, averaged 30 million viewers a week, received 25 Emmy Awards, and, half a century later, remains the gold standard for television comedy” — before noting her kindness and generosity and introducing her.

The 85-year-old comedy legend then took the stage and declared herself “really gobsmacked by this” before noting that, “Sometimes I catch myself daydreaming about being young again and doing it all over, and then I bring myself up short when I realize how incredibly fortunate I was to be there at the right time.” She added that variety shows like hers, with all the stars and musical acts and guests, are too expensive for networks to produce these days. “So here’s to reruns and Youtube.”

Burnett closed out her touching acceptance speech by dedicating the award named after her, “to all those who made my dreams come true and to all those out there who share the love I have for television and who yearn to be part of this unique medium that has been so good to me. I’m just happy that our show happened when it did. And that I can look back and say once more I am so glad we had this time together.” She then tugged her ear.

Canuck Sandra Oh, meanwhile, made history just by co-hosting the award show (with Andy Samberg) itself, becoming the first person of Asian decent to helm the Golden Globes. And the 47-year-old even won the award for Best Performance by an Actress In A Television Series — Drama for Killing Eve, where she gave a shout out to her proud parents, who were in attendance. But she got serious for a moment during the show-opening back and forth with Samberg, when she spoke from the heart about the diversity and representation in the room.

Michael Douglas, 74, began the evening by winning the award for Best Performance by an Actor in a Television Series – Musical or Comedy for The Kominsky Method, a Netflix series about a failed actor turned acting coach (Douglas) and his agent (Alan Arkin, 84) navigating the ups and downs of aging in Los Angeles.  In his speech he quipped that series creator Chuck Lorre “thinks getting old is funny” before dedicating the award to his 102-year-old father Kirk Douglas and shouting “Alte kakers rule!” Alte kaker means “old man” in Yiddish.

The Kominsky Method also won the award for Best Television Series – Musical or Comedy, leading to Arkin taking the stage and dancing playfully with Douglas as Lorre accepted the honour. Arkin told me himself about how much he enjoyed working with the cast and crew of the show on a recent episode of the Zoomer interview podcast Ages & Icons and noted that, despite their long careers in Hollywood, he’d never met Douglas before working on the show.

“I had no idea what to expect … I’ve always thought he was a very good actor but he always seemed kind of hard-edged to me and I thought he might be kind of slightly rigid,” Arkin said during our interview. “But he’s wonderfully flexible and generous and a joy to work with. As all the [Kominsky Method] actors are. The actors are just a terrific bunch.”

Speaking of screen legends, Oscar-winner Jeff Bridges, 69, accepted the Cecil B. DeMille Award for lifetime achievement in film at the Golden Globes, honouring his family and various friends and peers in the industry, as well as his wife Sue — “45 years of support and love. I wouldn’t be up here without you, my dear” — before exclaiming his joy for life itself.

“I’ve been tagged. We’ve all been tagged,” he declared. “We’re alive. We’re all here right now. We’re alive! … We can make a difference. We can turn this ship in the way we want it to go.”

“Nobody told me I had to follow Jeff Bridges. Who wants to do that?” he quipped, before declaring Alfonso Cuarón, 57, director of Roma, the winner.

Of course, the 76th Golden Globes offered many more quotable moments. Read on for some of our favourites.

* “[Crazy Rich Asians] is the first studio film with an Asian-American lead since Ghost in the Shell and Aloha.” — Sandra Oh

* “I just want to say that I’m going to use my platform right now to say in the next two years, everything I produce, I am making a vow — and it’s going to be tough—to make sure that everything that I produce, it’s 50 percent women. And I just challenge anyone out there who is in a position of power, not just in our industry, in all industries — I challenge you to challenge yourselves and stand with us in solidarity and do the same.” — Regina King, 47, accepting the award for Best Performance by an Actress in a Supporting Role in any Motion Picture for If Beale Street Could Talk

* “[Director] Jean-Marc Vallée, you demanded everything of me, except sex – which is how it should be in our industry.” — Patricia Clarkson, 59, accepting the award for Best Performance by an Actress in a Supporting Role in a Series, Limited Series or Motion Picture Made for Television for Sharp Objects

* “I’ll be cornering the market on playing charisma-free a**holes. What do you think, Mitch McConnell next? That could be good couldn’t it? … Thank you to Satan for giving me the inspiration for this role.” — Christian Bale, who played U.S. Vice-President Dick Cheney in Vice, accepting the Golden Globe for Best Performance by an Actor in a Motion Picture — Musical or Comedy.

* “Cinema at its best tears down walls and builds bridges to other cultures.” — Alfonso Cuarón, 57, accepting the Golden Globe for Best Motion Picture — Foreign Language for Roma.

* “I spotted Carol Burnett out there and I thought, ‘My God I know her!’” — Dick Van Dyke, 93, introducing Mary Poppins Returns

* “It was called The Wife. That’s why it took 14 years to get made.” — Glenn Close, 71, accepting the award for Best Performance by an Actress in a Motion Picture – Drama for The Wife

Michael Douglas, 74, Best Performance by an Actor in a Television Series – Musical or Comedy, The Kominsky Method

Patricia Arquette, 50, Best Performance by an Actress in a Limited Series or a Motion Picture Made for Television, Escape at Dannemora

Regina King, 47, Best Performance by an Actress in a Supporting Role in any Motion Picture, If Beale Street Could Talk

Patricia Clarkson, 59, Best Performance by an Actress in a Supporting Role in a Series, Limited Series or Motion Picture Made for Television, Sharp Objects

Glenn Close, 71, Best Performance by an Actress in a Motion Picture – Drama, The Wife