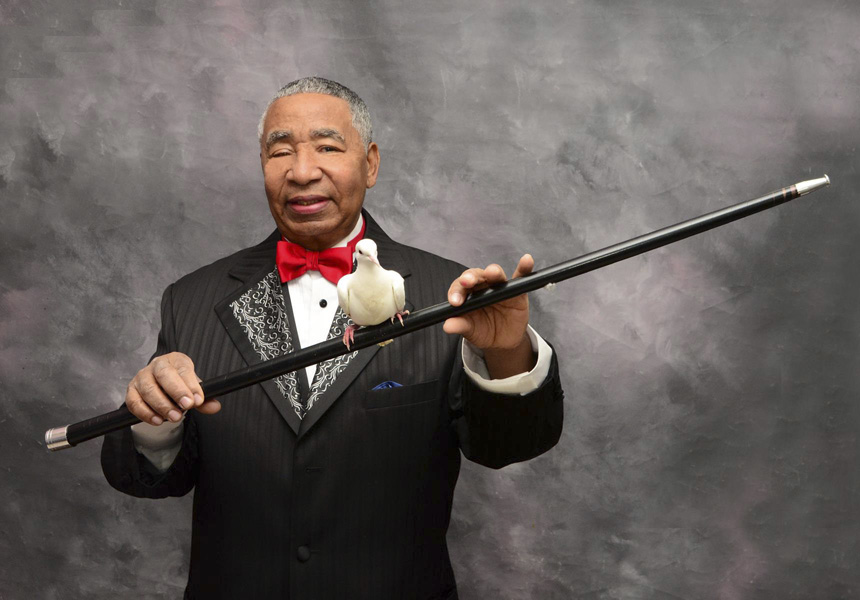 Magician Olmedini El Mago performs his act six days a week. He does so in English and Spanish. Occasionally he also sings parts of Beethoven symphonies. He wears suits and bow ties and sometimes a top hat. He tosses items into the air and makes them vanish; opens his hands and makes doves appear. Audiences love it, filming him on their smartphones as others cheer. Olmedini El Mago, an immigrant from Ecuador, has amazed New York audiences for three decades. His real name is Olmedo Renteria. He’s 78 years old and blind. His stage is the New York City subway.

Renteria’s incredible story was captured recently in a profile in the New York Times, complete with photos of the septuagenarian working his magic — literally — by Guatemalan photographer Jaime Permuth, who became enamoured with Renteria after first encountering his act on the subway in the late 1990s.

According to the profile, Renteria made a name for himself decades ago in his native Ecuador. “To other Ecuadoreans who encounter him, he is a welcome link to their childhood, when the magician appeared on television shows and judged beauty pageants,” the Times profile notes.

Renteria moved to New York City in the early 1990s to make a name for himself as a magician in America. Now, three decades on, blinded by a stroke and living in a Harlem apartment complex for disabled persons, he takes to the subway trains six days a week to perform his magic for an audience in transit — ever shifting and always on the move, much like Renteria himself.

In a piece on his personal photography website, Permuth recalls his first encounter with Olmedini El Mago 20 years ago.

“I was sitting in a Manhattan subway car when a tall, elegant man entered pushing a small, black, rectangular cart. It seemed odd to me that he was wearing a tuxedo and a red cotton shirt. And his head was crowned by an old-fashioned top hat. With great dignity and parsimony he began softly whistling and reached into his pocket to produce a long, multicolored streamer.

“Over the next few minutes, he went through a classic Latin American magician’s routine. Things would get tossed and disappear mid-air instead of coming down again. A boring, nondescript handkerchief would be funnelled into his closed fist and emerge as eye-popping red silk, and then unfurl to release a real, live dove in a flutter of wings. There were other sleight-of-hand tricks that led to the grand finale: pulling a beautiful, plump white rabbit out of a seemingly empty velvet box, its heart beating rapidly in its chest, eyes darting nervously from side to side. When the whistling stopped, the magician extended a long velvet pouch with golden trim and collected donations from passengers.  Dropping a bill into his pouch, I thanked him in Spanish for his wonderful show.  He smiled back and produced a small business card with his name written out in glittering letters on a velvety black background:  Olmedini El Mago.”

Permuth hadn’t seen Renteria since then, and tracked him down recently to photograph him and learn more about his story. His photos that ran with the Times piece show both the magician at work on the subway as well as at home in his apartment — which he shares with his two “magic” doves — where the walls are adorned with newspaper clippings of his career as a performer back home. The photographer adds in the story that, in Ecuador, Renteria “opened for Menudo once. He was a celebrity.”

Now, when he’s not performing on the subway, Renteria takes English lessons at the Ecuadorian embassy or practices his guitar at home. But with the help of an assistant he always returns to that speeding subterranean stage that he’s commanded for decades and that he dreamed will one day bring him the fame he always dreamed he’d find in America.

“He is such a romantic, old-fashioned figure,” Permuth told the New York Times. “When I look at him, I think of Don Quixote. Even though he is 78 years old, he still believes he can make it in New York City. He gets up each morning and fights his windmill.”