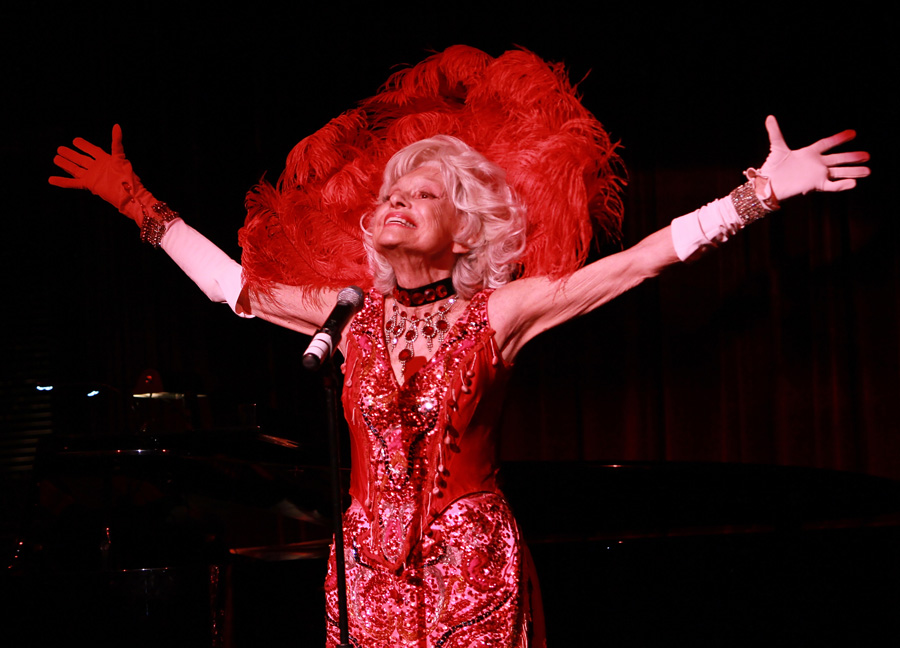 Broadway and film legend Carol Channing was one of the entertainment world’s most celebrated and recognizable, and imitated legends.

She originated the lead roles in stage productions of both Gentlemen Prefer Blondes and Hello, Dolly! and her trademark laugh and expressive features became part of her show business persona for more than six decades.

Channing proved a pillar of strength and talent, performing in stage revivals of Hello, Dolly!, her most famous role, into her mid-70s. But from rekindling a lost love to making history at the Super Bowl to her views on aging, some of the most intriguing moments in Channing’s 97 years occurred offstage. As such, we look back at five fascinating facts about the celebrated life of the great Carol Channing.

Raised by Christian Scientist parents who “did not drink and ignored birthdays because age represented the material world and therefore was an illusion,” according to the Los Angeles Times, Channing never had birthday parties as a child. In fact, in an interview conducted toward the end of 2018 with TheSpectrum.com, just a few months ago, Channing herself noted that, “It always feels a little odd to gather with friends for that purpose. The first time I ever remember celebrating my birthday was at the White House — President Kennedy had them bring out a cake with candles. I was completely surprised and a little embarrassed because I wasn’t at all sure what I should do. I think I’ve celebrated my birthday more in the last 10 years than during my entire life!”

Not celebrating her birthday did offer an upside, however. In later years she told the New York Times that, “I’m a Christian Scientist and we have no such thing as age. When I was growing up, I was never allowed to have a birthday and I hated it. Not having to tell my age is a favorite part of my religion.”

In the same New York Times piece, originally published in 1996, she lamented the stereotypes that accompany age. “They try to force you to be what they think you are. They think you’re somebody you’re not. They start worrying about you and looking at you differently.” She added that, “Shirley Temple peaked at 7; I haven’t gotten myself together yet.”

Channing famously originated the titular character in the Broadway musical Hello, Dolly! in 1964, a part that won her a Tony Award for Best Actress and remained her signature role for the rest of her life, reportedly performing it more than 5,000 times. The role, however, almost went to a different stage legend, as it was originally written for, and turned down by, Ethel Merman.

Channing also wasn’t happy that that the role went to Barbra Streisand in the big-screen adaptation. She wrote in her 2002 autobiography, Just Lucky I Guess, “What opinion would you have if someone … kidnapped your baby? My baby was Hello, Dolly!” She added that, “[Streisand’s] movie of Dolly was the biggest financial flop Twentieth Century-Fox ever had. There! I said it.”

3. She Made Super Bowl History at Age 49

While today the Super Bowl halftime show is a pop culture spectacle headlined by A-list acts, in 1970 the halftime gig consisted of mainly marching bands. But that’s the year that Carol Channing made history as the first ever celebrity to perform at a Super Bowl halftime show, singing “When the Saints Go Marching In” at Super Bowl IV in front of 80,000 fans. She knew very little about sports, let alone football, but as she noted in an interview nearly 50 years later, “It was like an opening night on Broadway, except we didn’t have much time to prepare for that first appearance. It felt a little like an after-thought. It must have been well received, because they asked me back two years later.” She did indeed return two years later, where she participated alongside jazz legend Ella Fitzgerald and others in the halftime performance “Salute to Louis Armstrong.”

Due to allergies, Channing became famous for an offstage quirk — she brought her own food to dinner parties.

“For years, Miss Channing carried her own food in silver containers, to restaurants and social gatherings,” the New York Times noted. “Some thought it an affectation. Not so: her food was prepared with bottled water, because she was allergic to something in tap water, she says. Added to that was another allergy, diagnosed more recently, from her hair dye. When she stopped using the hair dye, her sensitivity to tap water eased. Now, she can eat anything other than sugar.”

Channing was married four times — including to her publicist/manager Charles Lowe for 42 years, until filing from divorce from him in 1998. It was hubby number four, though, that provided the fairytale story.

According to Biography.com, “Channing had reminisced about her first love, Harry Kullijian, in her (2002) memoir. A friend told Kullijian he’d been mentioned in Channing’s book, which was a surprise to him, as he’d thought his old flame had already passed away.”

The couple reconnected and married in 2003, when Channing was 82-years-old and Kullijian 84. They remained married until the latter’s passing in 2011, starting a foundation to promote arts education and even performing on stage together at their old school, decades after first meeting there.