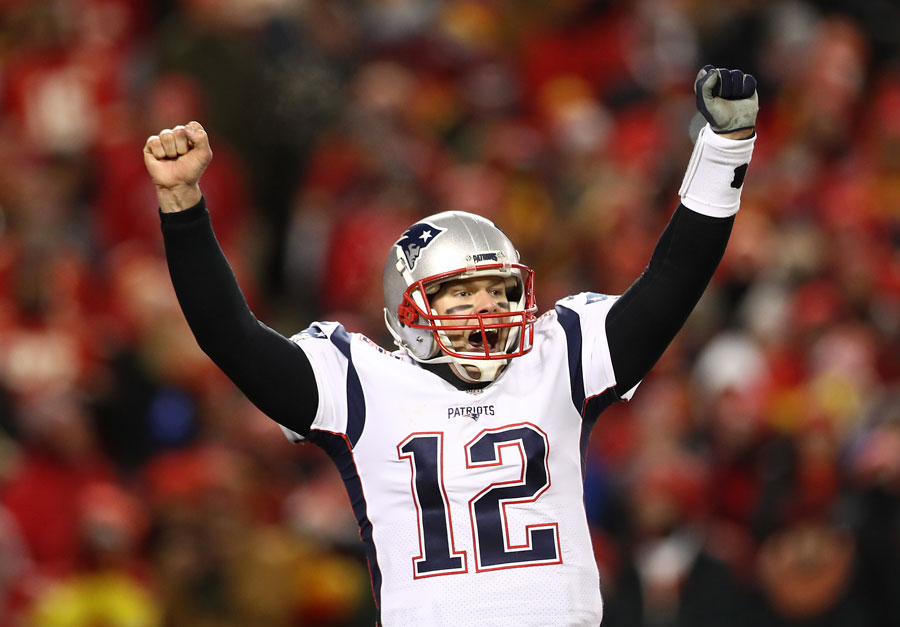 Tom Brady of the New England Patriots celebrates after defeating the Kansas City Chiefs in overtime during the AFC Championship Game at Arrowhead Stadium on January 20, 2019 in Kansas City, Missouri. The Patriots defeated the Chiefs 37-31. (Photo: Ronald Martinez/Getty Images)

The ageless Tom Brady has once again led the New England Patriots to the Super Bowl.

This will be the ninth time Brady will play in the big game. In 18 years.

In leading the Patriots to a stunning overtime victory over the Kansas City Chiefs, old-man Brady managed not only to deal with frigid temperature and knock off 23-year-old super quarterback Patrick Mahomes, but he also silenced all those critics who dared suggest he is getting too old to play this game.

For much of this season, sportswriters and former players have all been writing Brady’s obituary—he’s losing it, can’t throw anymore, he’s too slow. I thought he was too.

It certainly didn’t look like any of that was happening last night, as Brady had more zip on his passes than we’ve seen all season. He made all the right decisions and even threw in one of his coolly managed game-winning drives— converting three long third downs and making all the right plays—that bore all the hallmarks of his past greatness.

Tom Brady is a Galapagos tortoise:

“It’s rather difficult to determine the exact age of a Galapagos tortoise. Concentric circles on its carapace can provide hints, though these markings vary depending on the tortoise’s nutritional intake. Such is the challenge of properly understanding Tom Brady. Question his longevity, and New England fans will bluntly implore you to “count the rings.” Extended observation is the best method, but the animal will almost certainly outlive anyone who tries to track its decades-long routine of laborious overland migration and leafy-green intake. I’m not entirely sure whether I’m talking about Brady or the turtle anymore. Does it even matter?”

Tom Brady is a greybeard

“Brady is 41: That’s creaky-back, graying-whisker old, older than all but one full-time starting quarterback (Warren Moon in 1998) in NFL history. Kale smoothies and New Age workouts can make Brady one of the healthiest, spryest 41-year-olds on the planet, but nothing can make him 31 again.”

“Brady is old, and his skills are slipping. The numbers don’t lie. It’s only controversial among those who don’t want it to be true.”

Tom Brady is not only old, but he’s “really, really old”

Tom Brady is a malfunctioning cyborg

“No quarterback at Brady’s age has ever seriously competed for a championship, let alone won one. As recently as last season, it seemed possible that Brady really was the cyborg his fans believed him to be, likely to last much longer as a productive NFL player than anyone ever had before. Now, he looks further from the Super Bowl than he has in a decade.”

Tom Brady is old and crotchety

“Deal with it, people: Brady’s getting old. As in old and cranky. As in short of patience . . . yelling at clouds . . . backing out of the driveway without looking both ways. Old.”

“I’ve been saying it for weeks now – this is not the same Patriots team. The reason why is simple: they’re older, they’re slower, and eventually Father Time catches up to you …That is not the Tom Brady you’re used to seeing. To me, that is the thing. “