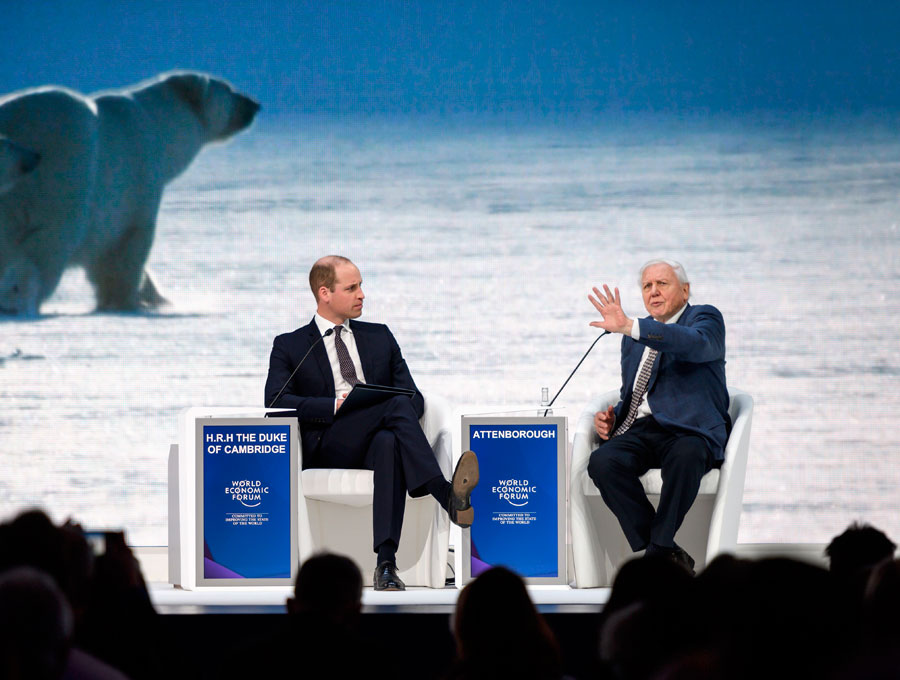 Sir David Attenborough didn’t mince words on Monday in a conversation with Prince William about human impact on the planet.

“We are now so numerous, so powerful, so all-pervasive [and] the mechanisms we have for destruction are so wholesale and so frightening, that we can actually exterminate whole ecosystems without even noticing it.”

The two were in Switzerland for the World Economic Forum. Attenborough was honoured with a Crystal Award, given annually to artists and cultural figures “whose leadership inspires inclusive and sustainable change.” Past recipients include Elton John, Bono and Margaret Atwood.

After congratulating Attenborough, the Duke of Cambridge got a chuckle when expressing his delight at the opportunity to “turn the tables for once” and play the interviewer.

Attenborough is best known as the voice behind countless nature documentaries including the Planet Earth series. Our Planet, his latest project with the World Wide Fund for Nature (WWF) and Netflix will air later this year.

The prince asked the British broadcaster why it was that he became a vocal naturalist only later in his career.

“To be truthful, I don’t think there was anybody in the mid 50s who thought that there was a danger we might annihilate part of the natural world,” he explained.

Like the 92-year-old, William is committed to the environmental cause. In 2013 he stepped away from the Royal Air Force to focus his efforts on conservation. He founded United for Wildlife, which supports initiatives to protect endangered species and fight wildlife trafficking. His passion can be said to follow in his father’s footsteps with Charles, the senior Prince of Wales, championing environmental sustainability for more than four decades now.

Attenborough’s appearance this week in Davos follows one at the UN climate conference in Poland this past December. His message for the more than 200 nations assembled there was no less serious, saying: “If we don’t take action, the collapse of our civilizations, and the extinction of much of the natural world is on the horizon.”

RELATED: Climate Change Poses Risk Not Only to Planet But Also to Human Health, Report Says

Before cluing up the interview, Prince William requested a missive from Attenborough for the economic and political leaders gathered in Davos.

“Care for the natural world.” he implored.

“I suppose the thing that I really care for, just in [our] ordinary daily lives,  is not to waste the riches of the natural world on which we depend. It’s not just energy, which of course is very important, but it’s also dealing with the natural world with a degree of respect.”