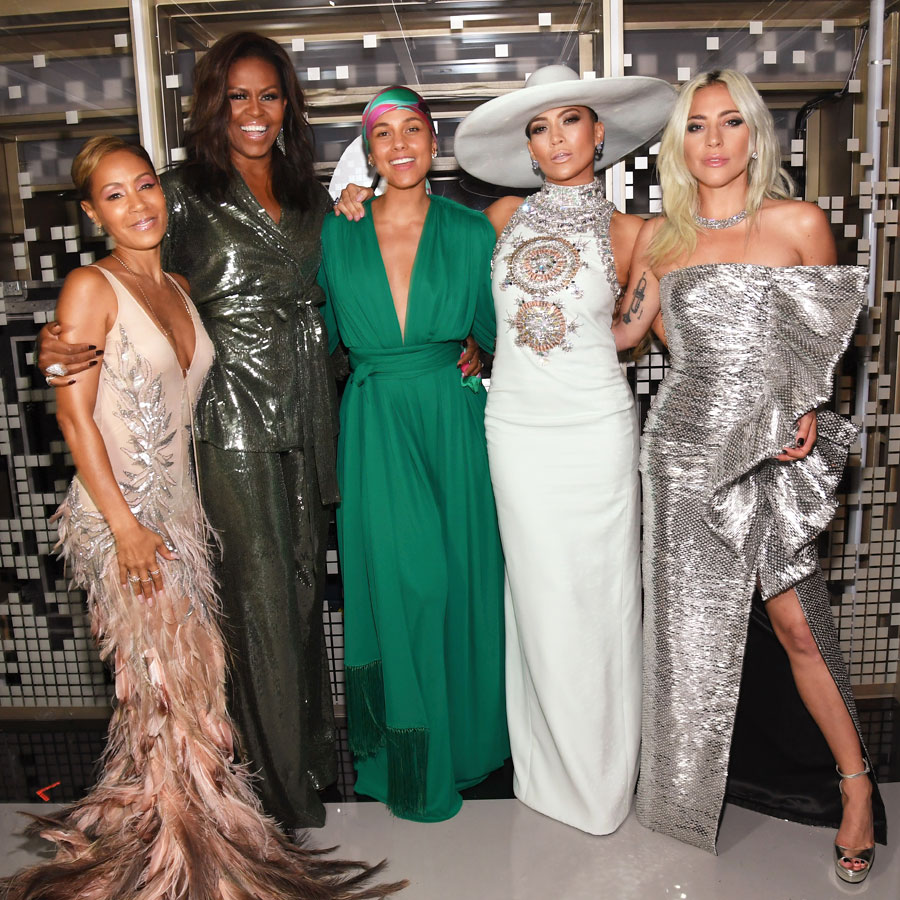 Musical legends and beloved public figures proved the highlights of the 2019 Grammy Awards.

The ceremony, which took place in Los Angeles on Sunday, kicked off with former First Lady Michelle Obama, 55, who received a rousing ovation from the audience when she appeared alongside Lady Gaga, Jada Pinkett Smith, 47 and Jennifer Lopez, 49, to discuss the inspirational role that music has played in their lives.

“From the Motown records I wore out on the south side to the ‘who run the world’ songs that fueled me through this last decade, music has always helped me tell my story, and I know that’s true for everybody here,” Obama said after restarting her monologue due to the audience cheering so loud for her that it drowned her out. “Whether we like country or rap or rock, music helps us share ourselves, our dignity and sorrows, our hopes and joys. It allows us to hear one another, to invite each other in. Music shows us that all of it matters — every story within every voice, every note within every song.”

A little later in the show, music legend Diana Ross took the stage in a radiant red gown to celebrate her upcoming 75th birthday by performing a pair of her solo hits – “The Best Years of My Life” and “Reach Out and Touch (Somebody’s Hand).” Ross’ nine-year-old grandson, Raif-Henok Emmanuel Kendrick, introduced her, declaring, “She is amazing. Young people like me can look up to her for her independence, confidence and willingness to be her unique self. She has shown the world that nothing is beyond our reach.” Ross then took the stage to loud applause, noting that, “When I was a little girl I felt the joy of singing. It made me happy, it made my parents happy and it led to this day. And it brings me joy. Through my life there has always been music and its power.” She had the audience on its feet as she performed, swaying back and forth with their hands in the air before ending with an inspirational message – “Together we have no limits. You can learn, dream, unlock new doors. All is possible.” – and closing by shouting “Happy birthday to me!” The moment became an instant hit on social media, as Ross’ actual birthday is March 26.

Another major highlight came with the tribute to Dolly Parton, who recently turned 73. In 2016, Parton told me that, “It baffles me because I’m supposed to be old but I don’t feel old. I really can’t tell you how I love to [perform] now and how important it is…I haven’t got as much time as I used to have so I want to make the most of every single minute.” And she did at the Grammys, rocking the stage with performers like her goddaughter, Miley Cyrus, as well as Katy Perry, Kacey Musgraves, Little Big Town and Maren Morris on a medley of hit tunes including “Here You Come Again,” “Jolene,” “After the Gold Rush,” “Red Shoes” and, of course, “9 to 5,” which had everyone in the audience on their feet, singing and dancing along.

Elsewhere on the show, Yolanda Adams, Fantasia and Andra Day performed a moving tribute to the late Queen of Soul, Aretha Franklin, by teaming up to sing “(You Make Me Feel Like) A Natural Woman.” It proved an apt song choice on a night dominated by female-led tributes, live performances and award winners, and following last year’s Grammys where, as the New York Times noted, “just one woman won a solo award during the telecast and the outgoing head of the Recording Academy, the organization behind the awards, remarked that women in music should ‘step up’ to advance their careers.”

And speaking of women in music, in a year where controversy pushed the Oscars toward proceeding without a host, Alicia Keys proved a hugely popular choice to helm the Grammys. Cheered on by the live audience and fans watching on social media, Keys didn’t fall into the usual “cynical host who makes fun of everything” routine. Rather, the first female Grammy host since 2005 (when Queen Latifah did the honours) made the night all about positivity and the shared love of music, acting as MC while taking the time to perform parts of 10 different songs during the show, including one point in a medley that saw her playing two pianos at the same time. Keys, a versatile songwriter and performer, also acted as something of a musical bridge between generations, playing varied tunes like the 1899 ragtime song “Maple Leaf Rag,”the Nat King Cole classic “Unforgettable,” the Coldplay hit “Clocks” and her own collaboration with Jay-Z, “Empire State of Mind,” among others fluidly and without missing a beat. She also participated in the Grammy Motown tribute alongside 78-year-old Smokey Robinson, Jennifer Lopez and singer-songwriter Ne-Yo and invited her friend, Michelle Obama, to participate in the show,  with the former First Lady tweeting, “A big part of friendship is showing up for your girls—that’s why I was thrilled to be there for the one and only @aliciakeys at the #GRAMMYs. She is one of the most genuine and thoughtful people I know—there’s no one better to help us all celebrate the unifying power of music!” And when it comes to all-purpose, dynamic hosts that keep the show upbeat and get everyone grooving, we’re think Keys should be on the radar for every awards show moving forward.

Meanwhile the Grammys also saw Toronto’s Drake take home the award for Best Rap Song for “God’s Plan.” He did, however, use his speech to call out perceived lack of recognition of hip hop artists by the Grammys, noting, “This is a business where sometimes it’s up to a bunch of people that might not understand what a mixed-race kid from Canada has to say, or a fly Spanish girl from New York, or a brother from Houston. But the point is, you’ve already won if you have people who are singing your songs word for word.” He then held up his Grammy and added, “You don’t need this right here.” Drake’s speech was then cut off by music, but the moment became one of the most talked about of the night.

In the non-televised portion of the ceremony, “Weird Al” Yankovic, 59, and his team won the award for Best Boxed or Special Limited Edition Package for Squeeze Box: The Complete Works of “Weird Al” Yankovic. In his acceptance speech, Yankovic quipped that, “I’ve kind of been playing the long game. I never really wanted to be a recording artist – I did it for 40 years just so one day I could win a Grammy for being an art director.”