Weaving a Fantasy: The Race for Best Costume Design 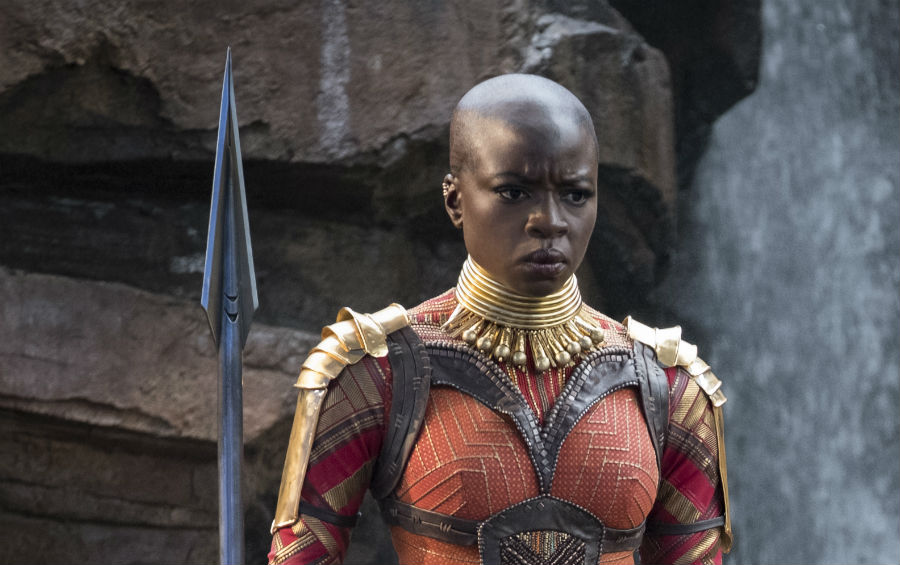 Actors already know how intrinsic costume is to creating character and how they can subtly contribute to the narrative of the film. Yet costume design has to perform that difficult dual trick of appearing on screen while also being invisible—as in, not stealing the limelight from performance (as the wardrobe department saying goes, if you notice a costume first it’s not done right).

Whether it’s storytelling or just fabulous fashion inspiration, Hollywood studio publicity departments also increasingly understand what an asset costume design is — for its marketing value, of course, and as a facet of the supremely collaborative industry that deserves audience attention. The 27th annual “Art of Motion Picture Costume Design” exhibition at the FIDM Museum in downtown Los Angeles is always a highlight of my Oscar season and getting to see the artistry in a selection of these newly-iconic film garments up close. (This year more than 100 costumes, including by all five Academy Award-nominated designers, are on view until April 12.)

The Academy Awards date back to 1929, but costume design has only been a category since 1948. The upcoming annual Costume Designers Guild of America (CDGA) Awards wisely divide feature film nominees by genre: Contemporary, Sci-Fi/Fantasy and Period. The Oscars used to separate categories too, but it was between work in black-and-white and colour— now it’s a single category, just five nominees make the cut. But there’s so much more!

On that note, here’s your cheat sheet to the Oscar costume design race and a few overlooked favourites that deserve a second look. The Ballad of Buster Scruggs

The Oscars love westerns, that uniquely American genre. They overlooked Milena Canonero’s work on the Euro-western sensibility of The Sisters Brothers (based on the acclaimed novel by Canadian Patrick DeWitt) in favour of Joel Coen and Ethan Coen’s anthology film The Ballad of Buster Scruggs. Mary Zophres, who has worked with the Coen brothers since Fargo, seamlessly evokes the dusty wild west in distinct swathes of characters and settings, since you could argue Buster Scruggs is actually six leads and six very different narrative contexts in one film.

Costume designer Alexandra Byrne had just finished shooting Mary Queen of Scots when we rode the Orient Express in France together last year (I wrote about Byrne’s work on the Agatha Christie movie for Zoomer at the time). She already has an Oscar for a different Elizabethan-era dress film, no less: Elizabeth: The Golden Age.

Here, she rises to the challenge of narrative intercutting and creative interpretation between Scotland and England’s two very different courts. One is the heart of genteel and established high society, the other the world of a damp and rather gloomy northern settlement led by her denim-clad upstart cousin.

Sandy Powell has earned three Academy Awards to date and is such a powerhouse that she’s been nominated twice this year, competing against herself! (And it’s the third time that’s happened.) Her Oscar nods are for two very different pictures: one the indie period comedy The Favourite, starring Olivia Colman, which is shot on a shoestring and just won a slew of BAFTAs including best costume.

The other is Disney’s lavish Mary Poppins Returns, with a presumably commensurate Disney budget. In the former, Powell restricts the principals’ costume palette to cream and black and makes inventive use of DIY on modern fabrics to conjure the 18th century court of Queen Anne. For Poppins, Powell assembled a team of textile artists, painters, milliners, jewellery and shoe makers to create a staggering 448 original costumes for a story that’s set in late 1930s London during the Great Slump. Her colourful work extends to Angela Lansbury’s Balloon Lady and to Topsy, Mary Poppins’ eccentric cousin played by Meryl Streep (Powell’s inspiration came from eccentric socialites Nancy Cunard, Edith Sitwell and Iris Apfel). In either case the only limit is Powell’s imagination. In a tough category she’s hard to beat (twice) this year, but that may open the race up to my favourite…

I’ve been covering costume arts for fifteen years and generally I try to be as neutral as Switzerland—my personal picks are between me and the office Oscar pool bookie — but this season it’s no secret that I’m all-in on Ruth E. Carter.

One of Black Panther’s seven Oscar nominations is for costume designer Carter and her dynamic, celebratory interpretation of both the past and future. This, in a storyline where dynastic royals mingle with superheroes and warriors! The original work on the Marvel fantasy draw as much on ancient motifs from across the African continental history and traditional handwork as they do cutting edge 3D printing technology.

It’s been thrilling to see the attention and acclaim for Carter in the wake of blockbuster Black Panther, including a traveling exhibition of her work and the fact that New York Fashion Week recently opened with a runway show inspired by Carter’s work and a display of costumes from thirteen previous projects, from Do the Right Thing and What’s Love Got to Do With It to Roots and Malcolm X. As a frequent creative collaborator of filmmaker Spike Lee, Black Panther is the culmination and distillation of a career spent researching African-American history and culture and bringing it to life.

As a longtime admirer of her work I had previously interviewed Carter by phone and jumped at the chance to meet her in person when she came to Toronto last year and spoke at the opening of “Cutting A Figure,” a BAND Gallery exhibition of photojournalist Charles “Teenie” Harris’ work. It’s an example of Carter’s wide-ranging process: the Harris archive of more than 80,000 photographs at the Carnegie Museum is a chronicle of Pittsburgh’s African-American community and Carter talked about how using the Harris archive has proven invaluable visual documentation for her research for historical films like Selma and Marshall and the forthcoming Eddie Murphy project Dolemite Is My Name, about black satirist, cult comedian and blaxploitation legend Rudy Ray Moore. But it’s in the world of Wakanda that Carter brings to life costumes that have never been seen on screen before. In its scope, scale and smarts, the costume design on Black Panther is masterful. Twice previously nominated, this should be her year.

Rapper Awkwafina’s breakout turn as Rachel’s irrepressible clotheshorse best friend Peik Lin Goh in Crazy Rich Asians comes to mind, with her pearl-studded Gucci shoes and daytime pyjamas. The film’s costume designer Mary Vogt harnesses the maximalist power of designer labels to flesh out the characters who wear it, rather than letting the clothes wear them. (Michelle Yeoh’s stealth wealth through mammoth jewellery is another example.) In Ocean’s 8, Sarah Edwards performs a similar trick in the way certain designer label aesthetics expresses character.

And A Simple Favor: Can we talk about that ending? And about Black Lively’s three-piece suits? Period and sci-fi/fantasy always impress voters with oomph, period research and elaborate creations (like Jenny Beavan’s outlandish confections in The Nutcracker and the Four Realms). That means contemporary costume work generally gets short shrift when statuettes are doled out. Sure, there have been nominations for Wendy Chuck and The Descendants or Mary Zophres’ La La Land, but few wins. Yet Renée Ehrlich Kalfus’ costumes in Paul Feig’s thriller are among the few we will remember for years to come.

If Beale Street Could Talk

Barry Jenkins’ If Beale Street Could Talk is simply ravishing to look at. At times its actors feel hallowed, lit like a series of religious icon tableaux — for example, costume designer Caroline Eselin puts lead Kiki Layne in an angelic ivory capelet. The saturated hues include the recurring use of green for hope, whether it’s a man’s knit polo shirt, a dress worn by Best Supporting Actress nominee Regina King in a pivotal scene, or a vase of flowers on the table. It’s a lush overall colour palette that recalls Vincente Minnelli.

Julian Day’s attentive recreation goes beyond dressing Rami Malek in the style of performer Freddie Mercury’s singular self-presentation on stage. He gets the garb of 1970s stadium rock right in Bohemian Rhapsody. After sifting through the Queen archives, there’s a faithful reproduction of the harlequin catsuit and Zandra Rhodes costumes but also inspiration from Robert Mapplethorpe portraits of the New York gay underground.

Hungarian costume designer Andrea Flesch has been on my radar since the distinctive 1970s-inflected look she gave The Duke of Burgundy (and for shaping much of CBC’s X Company). But after I saw Colette, starring Keira Knightley, I actually wrote her a fan letter. Flesch subtly mines feminist fashion history to add parallel layers of meaning and character clues in the clothing worn by Keira Knightley and her female co-stars. It’s understated work, as costume should be, charting writer Colette’s personal journey from country girl who loves nature to urban salon doyenne. But running concurrent to feminist social changes of fin de siècle Paris are the advances in style, whether it’s long hair cut into the au courant bob or a provocative bifurcated cycling skirt (aka jupe-culotte).

Colette’s music hall stage attire, for example, resembles the influential costume real-life Canadian dancer Maud Allen made for herself as she performed scandalous Vision of Salome routine more than a century ago. Clever hints of modernity and social history extend to Denise Gough’s mannish suiting to Eleanor Tomkinson’s American heiress dressed in frothy tea gowns. The latter are styled to recall Lucile’s romantic corset-free dresses that were ultra-feminine but still feminist in their own way. And her sourcing around the world included original vintage garments—some so antique, they disintegrated during shooting!

Z The 27th Annual “Art of Motion Picture Costume Design” exhibition at the Fashion Institute of Design and Merchandising Museum (FIDM) in Los Angeles, is free to the public on view until April. 12.