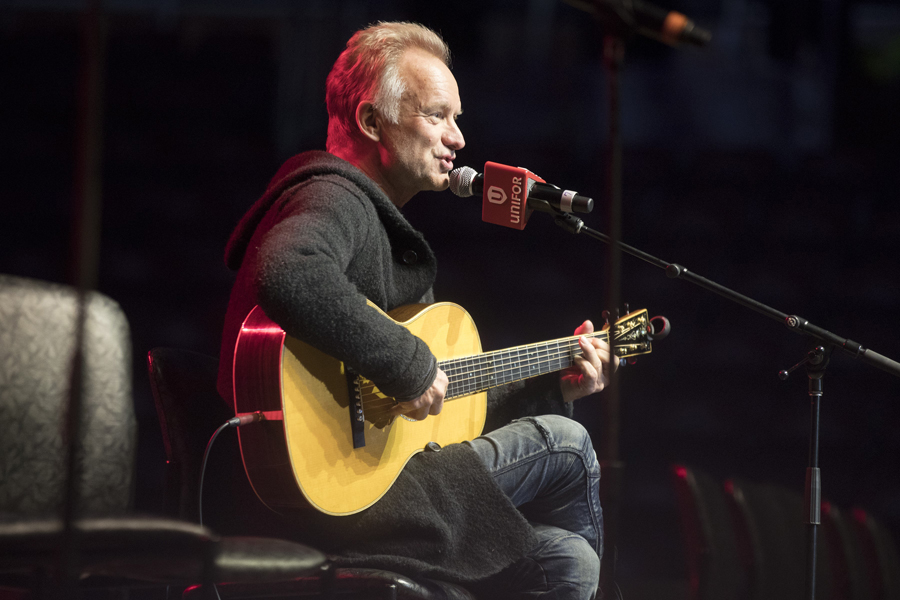 Rock legend Sting and cast members of his musical, The Last Ship, performed a concert on Thursday for Oshawa General Motors workers in the city’s Tributes Communities Centre. The concert was held in solidarity with the nearly 3,000 unionized and non-union workers who’ll lose their jobs when the Oshawa GM plant closes at the end of 2019. The Last Ship, which is currently running at Toronto’s Princess of Wales theatre with Sting in a leading role, is based on the story of the longstanding shipyard in the 67-year-old’s hometown of Wallsend in northeast England that closed in the 1980s. At a press conference after the concert, Sting told reporters that it was important that he and the cast visit the Oshawa GM workers.

“The story we’re telling on the stage every night at the Princess of Wales is this story. It’s a very human story and it’s a very common story,” he said. “And so we wanted to come here and express our solidarity and our support for their struggle. But it’s quite uncanny, the parallel of what we’re doing on stage every night and what we’re seeing here today.”

In November 2018, GM announced that they were closing their Oshawa plant, which originally opened in 1953, by the end of 2019 as part of a global focus on hybrid vehicles. Efforts by government officials at the federal and provincial level, as well as union leaders, to convince GM to stay have fallen on deaf ears while the company continues to shift its manufacturing business to Mexico, where workers are paid lower wages than their Canadian counterparts.

“They just want to pay workers less, in another place,” Sting said of GM at the press conference. “That’s not right.”

Sting kicked off the concert in Oshawa with the Police hit “Message in a Bottle,” which he later told reporters is, “a song about making a connection” – exactly what he hoped to do with the GM workers. The Last Ship cast then joined the singer to perform songs from the musical while wearing shirts that read “Save Oshawa GM.” Sting told the assembled crowd that, “The reason we’re doing the show is [to] support the solidarity for your cause here … We felt it was important to show our support for you.”

At the press conference, Sting recalled his own upbringing in Wallsend and how he lived “within spitting distance of the shipyard.” He noted that he never wanted to work there and instead embarked on a career of fame and fortune as a musician before realizing one day that he wanted to return home to his community to tell their story.

He noted that the residents of his hometown told him that he’d captured the spirit of their struggle perfectly.

“So I hope you feel the resonance here, in this town,” he added. “It’s the same thing. You have the dignity of your work, the pride of your work, who you are. You are what you do. You take that away, who are you?”