5 Things We Loved, and One We Didn’t, About The Elton John “Rocketman” Trailer 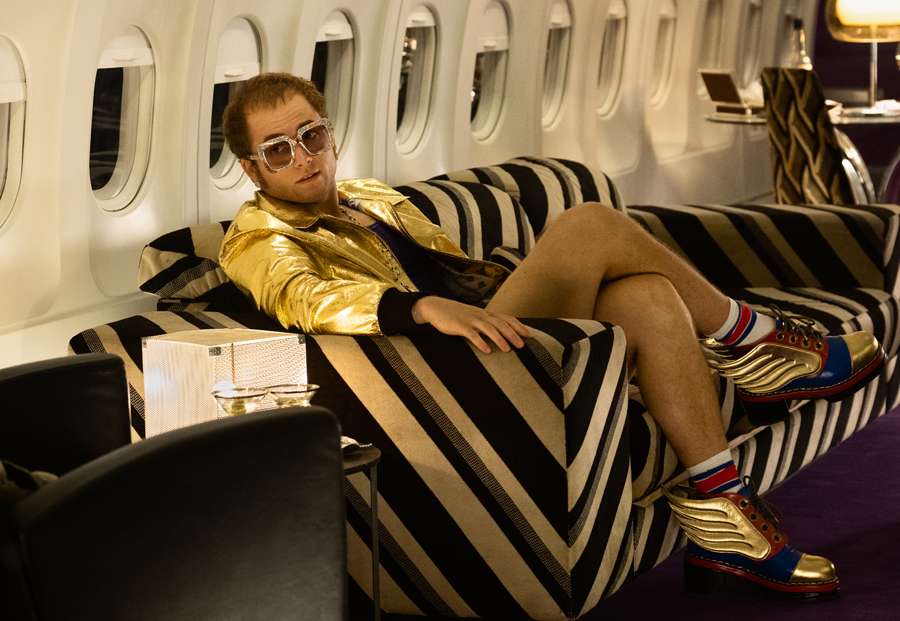 “I’m not the man they think I am at home,” Elton John croons in his 1972 classic “Rocket Man,” the tune that lends its name to the upcoming “fantasy musical” based on the life of the legendary rock star who’s currently in the midst of a three-year worldwide farewell tour. And long-time fans who’ve charted Elton’s life and career know there is indeed something to that refrain, beyond the heartbreaking poetics of Bernie Taupin’s lyrics.

Celebrities or high-profile figures are rarely ever the man or woman we think they are at home. In fact, my favourite Elton film, the 1997 documentary Elton John: Tantrums & Tiaras, directed by the singer’s now husband, Toronto-born David Furnish, illustrates this perfectly. The movie, filmed in 1995, offers an unfiltered, behind the scenes look at Elton at, as the title suggests, his best and worst. In the doc, the singer routinely goes from professional highs – rocking a crowd in Rio de Janeiro or accepting his Oscar for Best Original Song for The Lion King’s “Can You Feel The Love Tonight” – to personal lows – losing his temper on a fan on the tennis court or discussing his depression while resting, guard down, in his bathrobe – with the switch of a scene, illustrating the chaotic and tumultuous life of a global rock legend who’s conquered the music world while struggling to conquer his own personal demons.

And it’s the knowledge of these ups and downs that made me somewhat sceptical when I learned about the new Rocketman film and saw the original teaser trailer back in October. Don’t get me wrong – as a huge Elton John fan, I’m thrilled that there’s a musical about his life that’s about to hit the big screen. But many questions remained, from how the story of Elton’s rise from a shy kid in Pinner, Middlesex, to rock legend would be told to whether or not this “fantasy musical” would sugarcoat or completely gloss over Elton’s sexuality and personal struggles in the way many feel Bohemian Rhapsody did for Freddie Mercury (the two films do, after all, share a director in Dexter Fletcher). So now, with the first full-length Rocketman trailer released (watch it below), we’re offered a larger glimpse into what the film is shaping up to be. And after watching the trailer more times than we care to admit, we’ve compiled a list of five things we loved (and one we don’t quite love) about Rocketman.

The 29-year-old Kingsman: The Secret Service star isn’t quite the spitting image of Elton that Rami Malek proved to be for Freddie Mercury, but he’s pretty bang on and, with the shaggy wig and costumes, is virtually a doppelganger for the rocker. His mannerisms are fantastic and it’s clear that he’s truly embraced both the showmanship and charisma of the rock star and the sadness and struggles of the man behind the sequins and sunglasses. The last shot of the trailer shows Taron as Elton looking bottom-of-the-barrel gloomy as a swarm of assistants preps him to take the stage for one of his two famed 1975 Dodger Stadium concerts. And then, as though with a flip of a switch, he swings a baseball bat over his shoulder, smiles wide from ear to ear and marches proudly onstage to pose like a rock star with the whole world in his hands.

Of course, we’ll have to see the movie to be sure, but from what we’ve seen so far Egerton, or “Egerton John,” seems to totally embody the Rocket Man.

2. The transition from Reginald Dwight to Elton John…

Far from glossing over Elton’s early years, this film seems eager to chronicle the transition of shy little English boy Reginald Dwight into rock superstar Elton John, depicting not only the singer’s childhood but also his work with his early band Bluesology. The costuming here – a short-haired Reg Dwight in dark-rimmed glasses with a sweater over a shirt and tie sitting behind a keyboard – is bang on and offers a perfect juxtaposition to the scenes of a glammed up Elton slamming a platform shoe onto the piano keys during a rock show years later.

This transition, of course, is a major part of the Elton Hercules John (yes, that’s his legal name) story – a tale about a young man finding himself through music and struggling to express his truths while at once balancing the brightest stardom and the darkest loneliness. In the scene in the trailer where a young Reginald informs his Bluesology band mates that he’s changing his name to “Elton” – after Bluesology saxophonist Elton Dean, who questions the decision in the trailer (he took “John” from Bluesology singer Long John Baldry) – you can already see the glimmer of confidence in his eyes, as if he’s starting to understand the scope of the transformation on the horizon. It’s great that the film seems to do it justice, as it’s among the most pivotal elements of the Elton John story.

As seen in Reginald Dwight’s transition to Elton John, the stage persona of Elton John himself is a fantasy for the young man. The fame, the fortune, the opportunity to realize his wildest dreams, the chance to change the world through music – it’s all fantasy. As such, it’s easy to see why the “fantasy” element of this “fantasy musical” works so well for this subject matter.

Aesthetically, you can’t have an Elton John biopic without the over-the-top costumes, which are replicated here to full effect. From the giant feathered outfits to winged platform boots to the sequined Dodgers uniform this is peak, glam-rock Elton. These are all elements of the fantasy. But given the character of Elton John, as a vessel for Reginald Dwight to live his dreams, is also a fantasy, the day-dreamy, surreal elements of the film, such as the scene where Elton as a young boy conducts an orchestra in his bedroom, or when rock star Elton sinks aimlessly in a pool while glimpsing a younger version of himself playing the piano at the bottom , add a compelling and stylised layer to this biopic. In other words, it’s exactly what you’d expect from Elton.

Of course, what seems like a choreographed dance sequence that plays out in Elton’s suburban boyhood neighbourhood could prove a little too over the top – which is saying a lot when the film’s star wears multi-coloured, sequined and feathered outfits – but we’ll wait for the full film to see how it plays out.

4. The openness about Elton’s sexuality and personal struggles…

There’s a scene in the trailer where Game of Thrones actor Richard Madden, playing Elton’s first manager and former lover John Reid, tells the star that, “If your sleeping arrangements get out, all of this is gone.” It’s an especially striking scene given the manager seems to be stroking the back of Elton’s collar with his finger as he says it.

As noted earlier, one of the big fears about this film – stoked in large part by the largely milquetoast treatment of Freddie Mercury’s sexuality and AIDS in Bohemian Rhapsody – is that it would gloss over the more destructive or controversial elements of Elton’s life. But, as the trailer shows, the film does delve into his sexuality, including a scene depicting his 1984 marriage to his wife of three years, Renate Blauel, and appears to tackle his substance abuse and struggles with depression as well. How much the film explores all of these subjects remains to be seen, but the fact that they’re seen at all in the trailer is definitely welcome news.

5. The depiction of Elton’s mother and grandmother…

Elton’s mother, Sheila, and his grandmother Ivy, who together essentially raised him in the latter’s house, played pivotal roles in his musical development as a child. It was Sheila who introduced a young Reginald to rock and roll through records by Elvis Presley and others, while recognizing her own son’s musical talents and encouraging him to perform at family gatherings and take up music lessons. And it was his grandmother’s piano that Elton first learned to play on, with Ivy proving a supportive and beloved cheerleader for her grandson throughout his life and career. It’s a small thing, but showing the contributions of both Sheila (played by Bryce Dallas Howard) and Ivy (played by Gemma Jones), as the trailer suggests the movie will do, is a nice nod to the often unsung heroes of a rock legend’s most formative years.

What We Didn’t Love

Taron Egerton has a solid singing voice. And his covers of Elton classics from “Your Song” to “Bennie and the Jets” to “Tiny Dancer” and others heard in the trailer sound great. But they don’t sound like Elton. Part of the reason is that Elton himself reportedly told Egerton not to copy his singing voice.

Still, one of the best things Bohemian Rhapsody did was allow Rami Malek to lip-synch to Freddie Mercury because, really, there’s no one else who can sound like Freddie. And Elton, though not quite in his own vocal stratosphere like Freddie, does have a distinct voice and long time fans know those songs and Elton’s unique vocals and intonations by heart. So for a film to try so hard to make the lead actor look, and act, and appear as Elton John, and to recreate the era and costumes and aesthetics and culture and mood so that the audience loses itself in the fantasy that they are watching Elton at his peak, only to pipe in covers of Elton’s songs and completely burst that bubble is, in my opinion, the wrong choice.

If Taron Egerton has to sing in the film , have him cover one or two of Elton’s songs to sing over the closing credits and put on the soundtrack. But for a film so focussed on the fantasy aspect of “fantasy musical,” listening to covers of Elton’s most famous recordings within the context of the Elton biopic seems like a glaring misstep.

It reminds me of the scene in the trailer where Elton is floating underwater in a pool while enveloped in the vision of seeing his younger self playing the piano at the very bottom. In that moment, Elton is weightless, literally immersed, in the fantasy playing out before him. That’s the same feeling I get while watching this trailer – until Egerton’s vocals kick in. And then, like when Elton is inevitably pulled from the pool and jolted back to reality, the fantasy ceases.

In fairness, though, we’ll have to wait for the film to be released on May 31 to really declare whether the vocals make or break the fantasy. And who knows, perhaps at this time next year Taron Egerton will have earned Oscar buzz like Rami Malek while I’m left burning out my fuse up here alone.