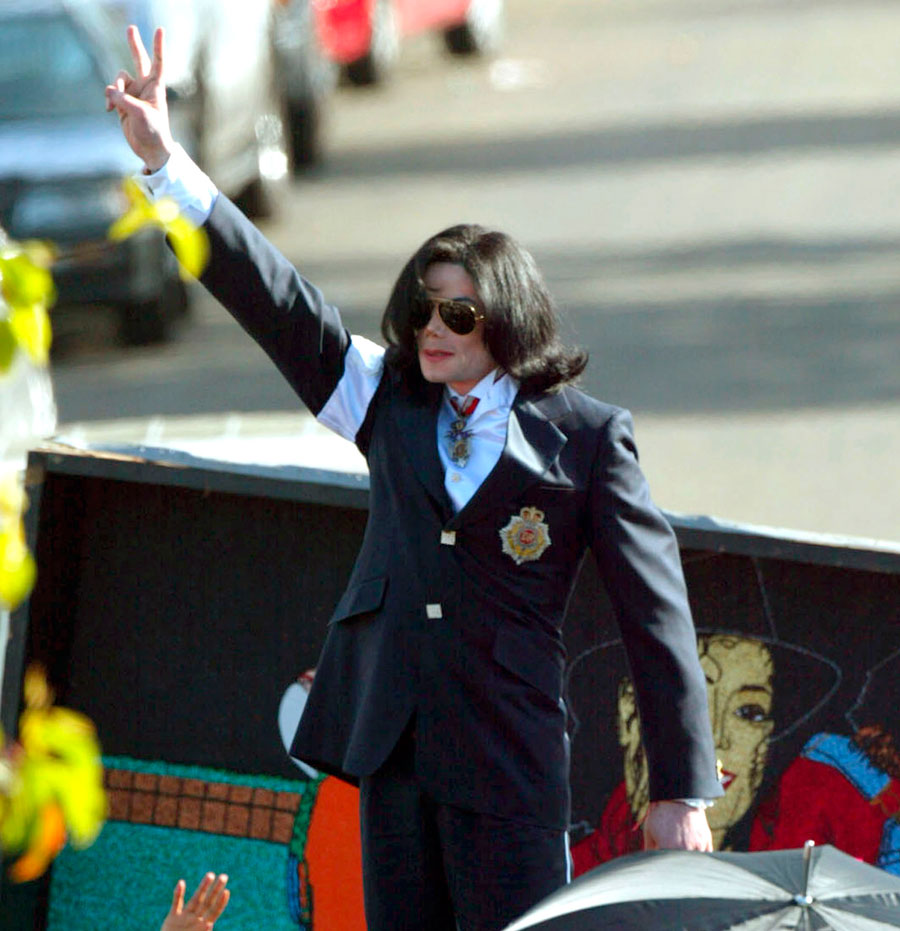 Michael Jackson stands on top of his SUV as he acknowledges hundreds of fans gathered outside the Santa Maria Courthouse. (Photo: Pool Photo by Spencer Weiner/Los Angeles Times/Wire Image/Getty Images)

I’ll admit it. I almost made it all the way through the first part of the HBO documentary mini-series Leaving Neverland, but couldn’t.

The extremely graphic recollections of James Safechuck and Wade Robson — two men who’d been boys sleeping in Michael Jackson’s bed for years — were assaultive. Anger, disgust, sadness, watching it made you feel like a juror at a trial, hearing horrific details you can’t unhear. Unlike a juror, I could turn it off.

But I gave night two a watch, and the tone had changed. Leaving Neverland was no longer about what allegedly happened, but about how it could happen without consequences to a perpetrator. It became a story about celebrity and mass adoration and the shield that it creates around the people we venerate.

And it’s why, despite the uproar, I am inclined to think — whatever you believe about the real story behind Jackson’s Peter Pan pajama party existence with “lost boys” in his Neverland estate — there is not likely to be any significant blowback from this latest, posthumous attempt at truth-telling.

Boycotts of Jackson’s music? BBC Radio 2 has denied published reports that it quietly banned Jackson’s songs (though it noted in its announcement that the reason they aren’t playing him is because he doesn’t fit the station’s mandate to play new artists). The U.S. radio network Cumulus has said it will leave that decision to its local stations. Other majors, like Spotify and iTunes, have so far avoided the Leaving Neverland controversy.

And why wouldn’t they? There is and still will be money in Michael Jackson’s music.

Beyond it being a story of two men who are clearly suffering over something in their past, Leaving Neverland’s most enduring images are the throngs of supporters outside the courtroom during his child sexual abuse trials in 1993 and 2003. It’s the garment-rending grief outside the hospital where he died in 2009, and the near billion people who watched his memorial at L.A.’s Staples Centre.

And it’s the rage-filled response (up to and including death threats) from fans online when Robson decided in 2012 to walk back a lifetime of support for Jackson’s innocence and sue the Jackson estate for abuse himself. (And now there are the amateurish take-down “Truther” videos being disseminated on social media, ironically using Leaving Neverland’s own footage to attack Robson and Safechuk’s story). It says Michael Jackson’s star power is impervious to scandal.

Or as Oprah Winfrey said, quoting the New York Times’ Maureen Dowd, in the post-show special After Neverland (before an audience of 100 professed sexual assault victims), “Celebrity supercedes criminality. How can you see clearly when you’re looking into the sun? How can an icon be a con?”

Psychological studies have shown that people who passionately believe something, when presented with evidence to the contrary, will tend to double-down on the strength of their belief.

But their chief grounds of attack on the men in Finding Neverland — that they changed their story — is the easiest to see through. Both men owed plenty to Jackson (in Robson’s case, maybe everything). They were discovered by him as “superfan” children, Safechuk in a Pepsi commercial, Robson as the five-year-old winner of an Australian dance contest.

Life with Michael Jackson was a deluge of hypnotizing riches, for both the boys and their parents (who haplessly come off worst in the story next to the accused superstar himself). When Jackson was faced with possible jail time, it’s easy to comprehend the depth of their relationship being such that they felt compelled to defend him. Robson, who testified in the 2003 trial on Jackson’s behalf (and whose career as a choreographer for the likes of ‘NSYNC and Britney Spears arguably sprung from his connection), said he felt Jackson would die in jail, and he felt he was saving his life by lying.

We want there to be moral clarity. We want the guilty to be clearly guilty. We want the victims to be above reproach or question. Winfrey, a child abuse survivor herself, and among the most recognizable celebrities alive, noted all this in her own experiences and the skeptical questions asked of victims who show no outward signs of damage.

“I have said for years, if the abuser is any good, you won’t know what’s happened,” she said. Both accusers admitted they still feel on some level that they “let Michael down.”

Winfrey — who herself has become an object of internet hate for her participation in the documentary’s launch — dutifully read the Jackson family’s unequivocal denial of Robson and Safechuk’s story, which evoked the “hundreds” of people who knew Michael” who would attest to his innocence. They could have made that “millions.” But innocence or guilt is not a zero sum game, except where a jury is involved.

All we know for sure is that Leaving Neverland introduces us to two troubled people, whose relationship with their parents seems irreparably damaged. The alleged perpetrator is dead. His estate is zealously guarded. His fans are committed for life.

The only good that can come out of this latest viral outrage spiral is a bigger-picture awareness of child molestation and “grooming” and a colder eye toward celebrity worship.

“It’s bigger than any one person,” Winfrey said. “It’s about this thing, this insidious pattern that’s happening in our culture that we refuse to look at.”