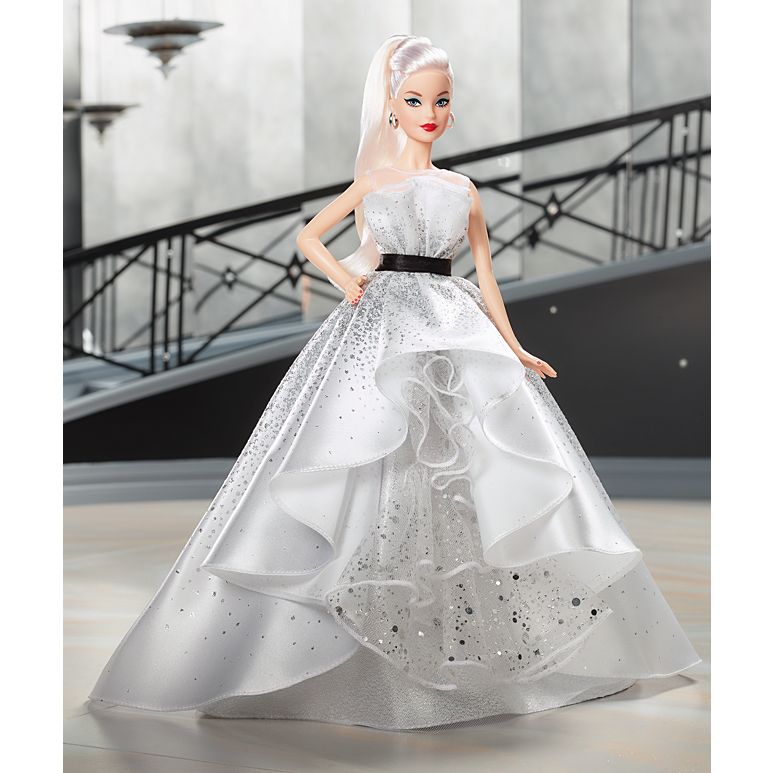 Barbie is now a sexagenarian but don’t look for lines or crows feet on her flawless face. Her smile is still knowing, she still gives good side eye and that glorious mane of hair is glossy as ever. Not one to miss an opportunity to wear a new frock, the fashion icon is dressed for this milestone birthday in a dazzling silver gown (above).

But her makers at Mattel know that for Barbie to remain the reigning queen of all fashion dolls and a blockbuster babe (some 58 million Barbies are sold every year in 150 countries) she has to keep up with the changing times.

While she is now one of the most diverse dolls on the market, there is a category of Barbie dolls under the “Role Model” series where a one-of-a-kind doll is created in the likeness of an inspiring woman from around the world. This initiative aims to introduce young girls to the limitless possibilities they can achieve.

There is also a Canadian in the lineup who now has the honour of a Barbie in her likeness: ice dancing champion, Tessa Virtue. The figure skater and her partner Scott Moir are the most decorated figure skaters in Olympic history with three gold and two silver medals. The Tessa Virtue doll is dressed in the red dress she wore in the free dance at the 2018 Pyeongchang Games.

While Barbie’s birthday celebrations are a global affair, here in Canada, she marks the milestone anniversary with a party at the CN Tower, with Virtue in attendance.

And in a nod to the life long appeal Barbie holds for some women, grown-ups can now shop for fashions and accessories inspired by the legendary fashionista. The Bay announced there will be Barbie pop up shops in Hudson’s Bay flagships in Toronto, Montreal, Vancouver and Calgary. In celebration of the 60th anniversary, the Discover This: Barbie pop ups will feature the creations of four female Canadian designers — Hilary MacMillian, Narces by Nikki Yassemi, Biko by Corrine Anestopoulos and Hayley Elaesser.

It’s Barbie’s world after all.

Please see below for a selection of the Barbie-inspired clothing and accessories from four Canadian designers, available at Discover This: Barbie pop up shops in select Hudson Bay stores and www.thebay.com