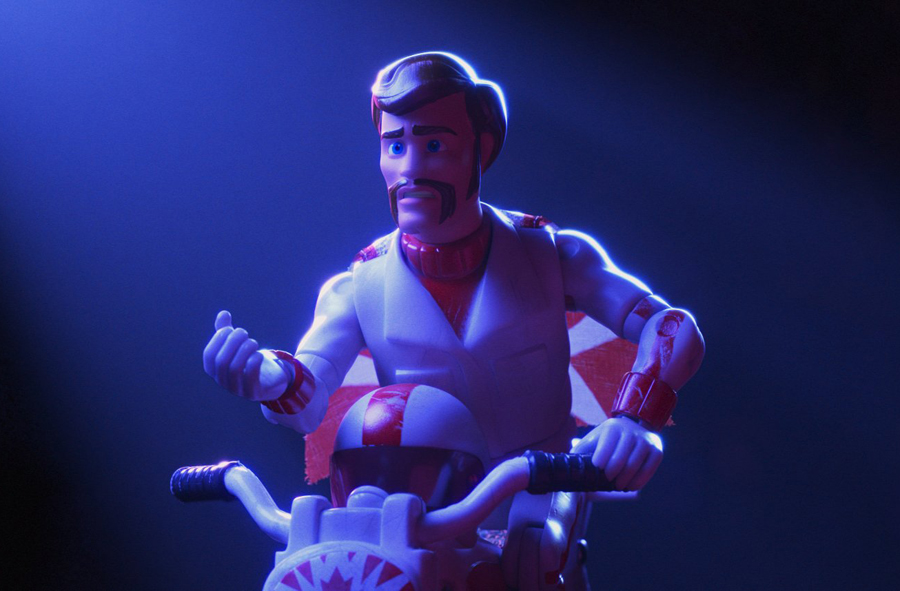 On screen and off, Keanu Reeves is a man accustomed to wearing many hats, from slacker to surfer, hero to Hamlet, lawyer to royal to rock star and writer to, most famously, an enlightened hacker rebelling against the Matrix. The 54-year-old Beirut-born Canuck star’s latest hat, however, is more of a motorcycle helmet — white with a red racing stripe down the middle — matching the rest of the Canadian colour motif adorning Duke Caboom, Canada’s greatest stuntman.

The character was revealed yesterday exclusively by People magazine and Entertainment Weekly, including the below post on Instagram. The reveal coincided with the release of the first full-length Toy Story 4 trailer (see below). Evoking both Super Dave Osborne and Evel Knievel, Duke Caboom — complete with red and white outfit, cape and motorcycle — is a 1970s vintage toy, which according to the Toronto Sun, “can’t actually do the stunts advertised by his own commercial. Weighed down by the failures of his past, he has some serious identity issues when he encounters Woody (Tom Hanks) at an antique store.”

Reeves himself spoke with People magazine about the character, noting, “Duke becomes an important part of [Woody and Bo’s] mission. They use his skills as a motorcycle daredevil, but what they ask him to do confronts his fear of failure. So he has to kind of face his fear in order to help the greater good.”

In fact, with Woody and other characters in the film struggling with the meaning of their own existence, the entire movie has the makings of a midlife crisis magnified by Pixar animation. But before you second-guess taking the kids/grandkids to see Toy Story 4, consider the positives of watching some of your deepest, darkest, aging concerns playing out on the big screen. For one, they’re presented via the wonderful vocal talents of Keanu Reeves, Tom Hanks, Annie Potts, Tim Allen and others.

More importantly, though, the Toy Story films have always served as something of an allegory about healthy aging, from young Andy outgrowing his toys to the older toys’ worry about newer ones taking their place to, now, questions the toys have about their own existence. And yet the journey is always rewarded with a heart-warming, if not tear-jerking, resolution born of resilience, teamwork, remaining active and engaged, recognizing one’s self-worth and using those talents to help, literally or metaphorically, save the day. It’s a lesson that Duke Caboom is poised to learn and one that we can all cling to in times of concern.

Even Reeves told People that, “There’s so much fun and humour and adventure in the stories, and they have these kind of classical motifs of resurrection, healing, surviving at all odds, compassion, working together. But also dealing with individuality and respecting individuality, which are all really important things to speak about, especially in children’s storytelling, but really in any kind of storytelling.”

And that’s enough to carry us forward, to infinity and beyond!