Gee Willikers, Batman is 80! The Dark Knight Was at His Best When He Wasn’t Quite So Dark 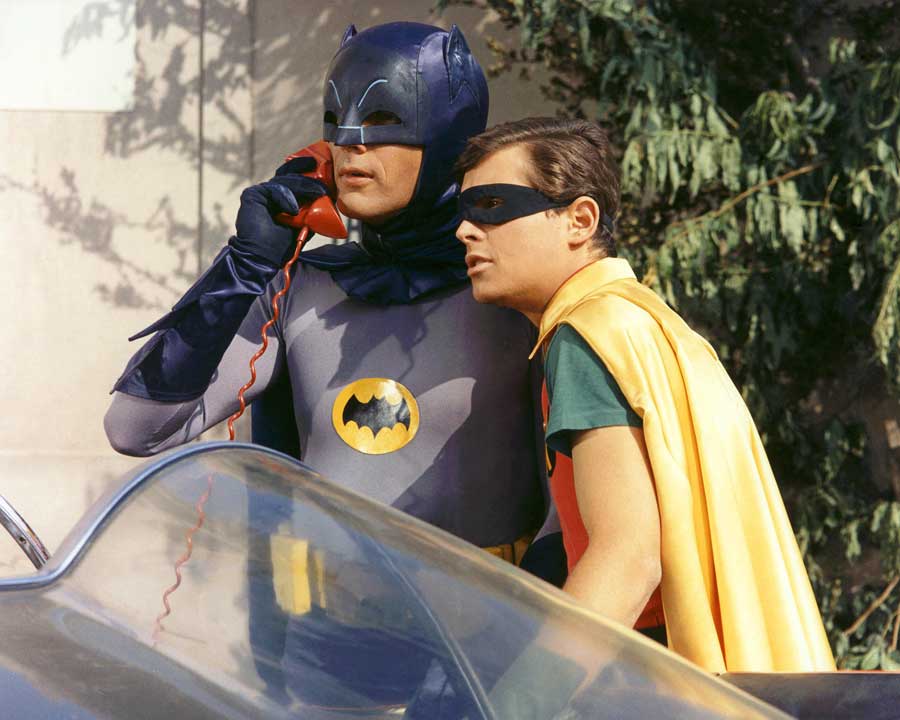 This week marks the 80th anniversary of the introduction of Batman — and the 1,000th edition of Detective Comics in which he first appeared.

He looks pretty good for his age. No laugh-lines on his face. But then he hasn’t laughed in 50 years.

It’s an auspicious time for an anniversary. Ben Affleck was recently fired as the Dark Knight after four years, during which time, he never got to star in his own stand-alone Batman movie.

There is The Batman on Warner Brothers’ sked for 2021, to be directed by Matt Reeves (Planet of the Apes). But in the meantime, the studio has had a hit with a jokester in Aquaman, and also broke the box office with Wonder Woman, which had plenty of light moments as well.

Marvel was always the superhero universe with a sense of humour. DC was serious. Guess which one is making more money?

So, this may not be the best time to go dark. A year before he died, I was lucky enough to interview Adam West, the Batman of my childhood, and the one that matters most to my generation.

I asked him about the many Batmen that followed him onscreen over the years. “There’s so much talent and money associated with those movies, I don’t know why they haven’t got it really right,” he said. “But I think what they should do is consider maybe more human interaction and humour and wit and warmth, and it might work better.”

In fact, every generation seems to have had its own Batman. The template was created in 1939 — Bruce Wayne’s parents’ murder, his single-minded crusade to make himself into a brainy, rich, muscular vigilante, that specimen of Myotis lucifugus that flew through his window (“A bat! It’s an omen!”). All this happened in the heart of the film noir era.

In fact, Batman was so grim that they almost immediately introduced Robin to soften him up. (Which in turn made Batman & Robin a target as probable homosexual role models during the Senate Subcommittee on Juvenile Delinquency in 1954. Talk about serious).

I will now defend TV’s Batman as the perfect TV show in the perfect moment. It served as the embodiment of Susan Sontag’s “Notes on Camp,” which sought to erase the boundaries between “high” and “low” (pop) culture. Camp, she said, thrived on a love of exaggeration and disengaged itself from politics.
Producer William Dozier may never have read Sontag, but he read the comics, which had reached a point of absurdity in the mid-‘60s, and he understood that this over-the-top approach could amuse adults and stimulate children at the same time. And it hit crazily, airing twice a week on ABC with an audience share of more than 50% — meaning more than half of everybody watching anything was watching Batman.

And it was damned funny. West’s deadpan delivery of lines like, “Remember, Riddler. You can’t buy friends with money,” holds up even today on retro TV cable channels. And the Batman-and-Robin-scale-a-building scenes (clearly walking horizontally with the camera turned sideways) often included cameos from the “windows” that included Jerry Lewis, Sammy Davis Jr., and Ted Cassidy as Lurch from the Addams Family.

So, if you’re going to follow the adventures of people who wear underwear outside their tights, there’d better be a sense that everyone’s in on the joke.
As it happens, I — who bought those first ‘60s comic books that are the templates for billion dollar movies now — gave up buying superhero comic books about the time I was 14. I moved on to adult horror comics, then underground comics like Fritz the Cat, then National Lampoon, and had given up looking at pictures and word balloons altogether when Frank Miller’s The Dark Knight Returns series rebooted Batman in 1986.

I’m not sure why the ‘80s were ripe for a grim Batman. There was the same existential dread about missiles pointed at us as there’d always been. There were vindictive moralists in the White House, just like under Nixon. But by the time Tim Burton made his Batman in 1989, there was perestroika and glasnost and the imminent fall of the Berlin Wall and of the Soviet Union itself. It was actually shaping up (albeit temporarily) as a good time to be alive.

I submit, with due respect to Christian Bale, that natural comedian Michael Keaton proved the adage that drama is easy and comedy is hard, by being the best “dark” Batman. There would come a moment when they tried to turn the Dark Knight back into the light. That came with the hiring of Joel Schumacher to film what would turn out to be Batman Forever (with off-screen drug casualty Val Kilmer) and Batman & Robin (with George Clooney, and a Bat costume with rubber nipples on the chest-plate).

I interviewed the colourful Schumacher just after he was hired, about Batman’s darkness. ““Does it really have to be so depressing?” he said. “Can’t we have some fun with the character? I get it, Bruce Wayne’s parents were killed. Isn’t it time to get over it?”

It wasn’t a bad idea. But they were bad movies. Mad TV had a hilarious sketch about a Batman 5, directed by Schumacher as a musical, starring song-and-dance man Ben Vereen.

But mockery kills. And Schumacher’s Batman effectively killed the franchise for 11 years.

Where Batman will go in 2021 depends to a large extent on what sells at the theatres in the next year or so. But a lot of us are ready to go into the light.
Maybe, at age 80, it’s time Batman turned his frown upside down once more. A grumpy old man is not a good look.