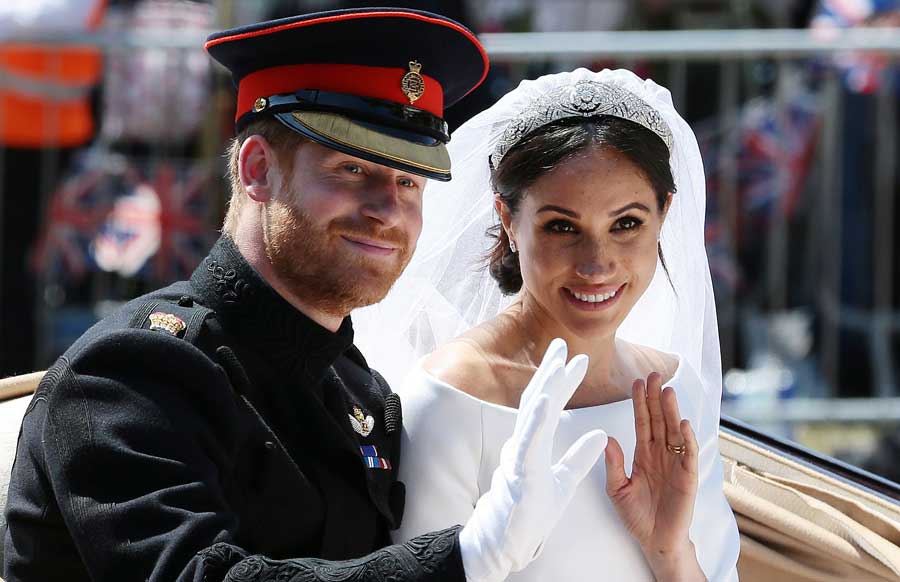 The Duchess of Sussex is now reportedly on maternity leave, with no more official engagements planned until she gives birth to the spare’s heir. So, does that mean that the Markle-Sparkle-Industrial-Media Complex will shift gears down from its constant overdrive? Hell To The No.

A recent episode of a new CTV show, Whiskey Cavalier, starring Jake from Scandal — also known as the heartthrob from Felicity — thirstily featured the rescue of the Duke and Duchess of Sussex from MI6 turncoats as a key plot point. Oh, the suspense.

The May issue of Tatler, the magazine for the British Upper Crust with all that that implies, is out with a snippy little piece taking stock of the Meghanomania a year in, in which they report that the insiders (i.e., nose-out-of-joint courtiers and the Prince’s replaced pals) take issue with Harry’s devotion to her (how dare he be besotted by his wife?), bemoan her obvious brilliance and are suspicious of her drive (obvious ambition just not done).

One can only imagine the outcry if the Duchess embarked on her life in a Royal Family, known for duty with a public schedule and initiatives, only to scale it back to Melania Trump levels of output. Her Majesty Queen Elizabeth II, who maintains a shockingly packed schedule at 92, seems to appreciate Markle’s work ethic, already rewarding her with four royal patronages and an appointment as the Vice President of The Queen’s Commonwealth Trust. And let’s not forget the Sussex’s triumph in getting the Monarch’s approval to consolidate their power as global ambassadors for Britain and allowing them to create their own royal household, or court, separate from the Duke and Duchess of Cambridge’s — that’s William and Kate to you.

This is a head-spinning long way away from the set of Suits, the popular cable series filmed in Toronto that Markle starred in for seven seasons — and the base from which she built her impressive platform as a social media influencer, feminist activist and global philanthropist (way before a certain ginger–haired Prince Charming was even a glint in her eye).

In between those seasons, she plied her craft in made-for-TV romantic movies like Dater’s Handbook and When Spark’s Fly, so it was quite meta when, back in 2018, a certain Baby Sussex was, yet, just a glint in the couple’s eye.

Lifetime, the outfit that brought us William & Catherine: A Royal Romance back in 2011, is also the network that blessed us with Harry & Meghan : A Royal Romance. Dear Reader, I watched it. And despite the winning casting of the two leads, the enterprise was undone by the wooden dialogue, the cheap sets, an unimaginable moment where the Queen shows Meghan a picture of the 19th century’s Queen Charlotte — who historians say was of African descent— and two cringe-worthy interludes set on Safari in Africa, where a lion, who may or not be the spirit of Princess Diana, visits a boyhood Harry after her death.

Anyway, it ends at the declaration of their love, or it could be the engagement, but who could have imagined the Markle Family Drama that ensued in the lead-up to the couple’s Windsor Wedding, and since, making the sequel to Harry and Meghan: The Romance all but an unnecessary offering to the tabloid gods.

According to a press release, the Harry & Meghan: Becoming Royal will examine the Sussex’s love story, “pulling back the curtain to reveal the untold joys and challenges of life inside the royal family during their pivotal first year of marriage. Beyond blending their families and cultures, Harry and Meghan’s core values are put to the test as they try to find the balance between honouring royal tradition and staying true to their beliefs.”

Filming is underway in Vancouver and Becoming Royal will premiere on Memorial Day (May 27), with new actors as leads. With the real-life Duchess slated to give birth at the end of April, according to unconfirmed reports, the burning question, apart from who will play Oprah at the wedding, is will the filmmakers wait for the baby’s birth, wrapping the film with a gender confirmation.

Rumours have already surfaced in the British press, naturally, that the thoroughly modern royals would be raising their child in a thoroughly modern, fluid manner. That is clearly yet to be seen. Details leaked from the Duchesses’ much-chronicled Baby Shower in New York in March seemed to point to a Little Princess. But at this point, how closely art will imitate life,  or vice versa, is anyone’s guess.