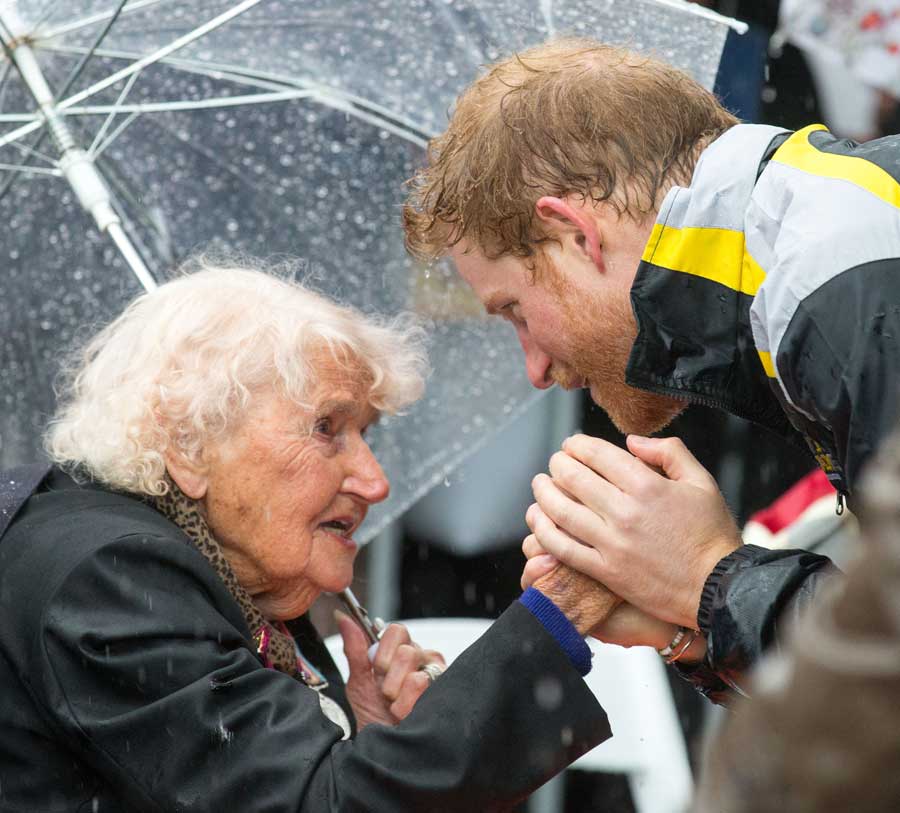 Prince Harry meets Daphne Dunne on a walkabout on Circular Quay in Sydney, Australia, during a day of events to mark the official launch of the Invictus Games Sydney 2018. (Photo by Steve Parsons/PA Images/Getty Images)

Daphne Dunne, an Australian war widow who developed a special bond with Prince Harry over the years has passed away at the age of 99.

She died at the Sydney Adventist Hospital, three days after her 99th birthday.

“She was a truly special lady who will be greatly missed by so many,” Dunne’s family wrote on Instagram. “It is fitting that Daphne passed away on the first of April as it is a month of renewal, remembrance and reunification with her loved ones that passed before her.”

The Duke and Duchess of Sussex, who officially moved into Windsor Castle’s Frogmore Cottage today, have been deeply saddened by their friend’s passing. The couple wrote privately to Dunne’s family to express their condolences.

Just last week, Dunne had received birthday wishes in a letter from Prince Harry and Meghan Markle. Unable to personally deliver the letter on time, their message was delivered to Dunne on an Aussie talk show, The Today Show.

Dunne told Nine News she was surprised that the prince took the time to send her a letter as she didn’t think he would pay attention to her birthday.

However, over a number years and visits to Dunne’s home of Sydney, Australia, Harry had developed a particular closeness with Dunne.

The pair first met in 2015, during Harry’s royal visit to Sydney. Harry, who served in the British army, approached Dunne when he noticed her late husband’s war medals on her coat.

Pinned to her coat was the Victoria Cross her husband, Lieutenant Albert Chowne was awarded posthumously. He died at the age of 25 in 1945 during an attack on a Japanese machine gun post in Papua New Guinea.

“The very first time our eyes met, I knew this was the start of something very special,” Dunne wrote of her first meeting with Harry on Instagram. Clearly, Harry had felt the same. On his next visit to Sydney to promote the Invictus Games in 2017, the Prince immediately recognized Dunne, who had waited in the rain with a group of fans. The two embraced and chatted once again.

“He kissed me on the other cheek this time,” she told The Telegraph at the time. “He really is a lovely young [man] and he’s warm and genuine and really cares about the injured servicemen and women. He’s doing a fantastic job supporting them.”

Their final meeting took place in 2018, when Prince Harry was at a public outing at the Sydney Opera House.

Once again Harry knelt by her wheelchair, this time joined by Markle, who was sporting an early baby bump.

“Congratulations, I think that’s marvellous,” she said of the pregnancy as she held Markle’s hand. “It’s just what Harry needs.”

As she gave the couple flowers and cards later, she added a final note of approval, saying, “I think it’s wonderful, the two of you.”