Woodstock 2019: Will Those Who Remember The Original Enjoy This Reincarnation? 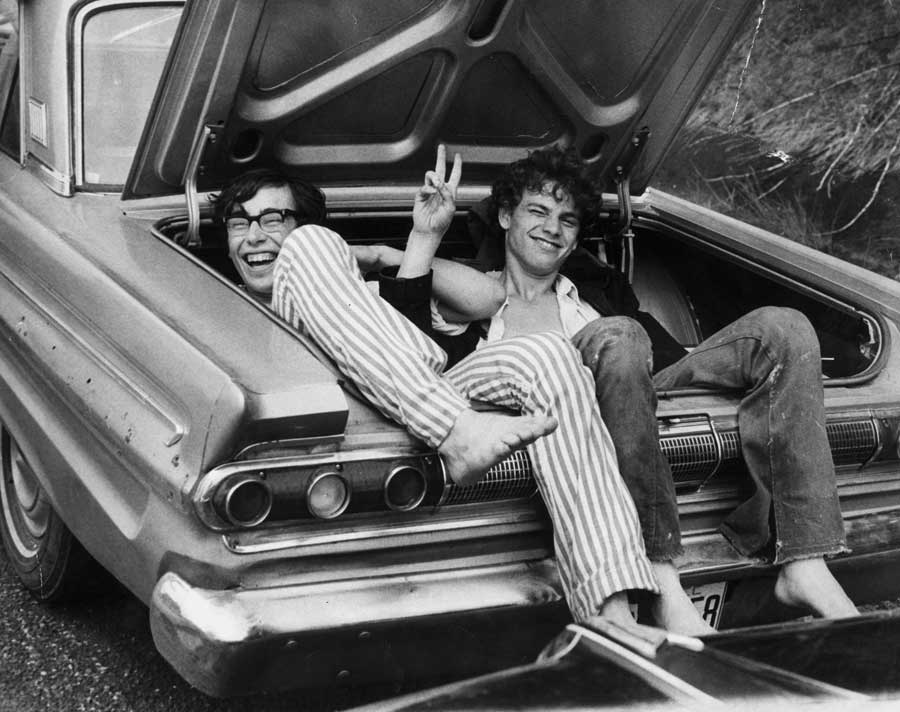 August 1969: Two young men in the boot of a car after hitching a lift home from the Woodstock Music and Arts Fair. (Photo:Three Lions/Getty Images)

Recently, in a rant on climate change on his HBO show Real Time, Bill Maher mentioned the real threat of bananas going extinct in our lifetime, with the punchline, “Yes, we have no bananas.” I laughed, despite myself. Then I thought about how old I had to be to get that joke. (Maher, for the record, is 63).

If you believe you should only know references from your own lifetime, that would make me somewhere north of 100. The song “Yes, We Have No Bananas,” was written in 1923. It was used in a Three Stooges movie (before I was born) and recorded by Benny Goodman and Spike Jones (before I was born). Within my lifetime, it was played in an episode of The Muppet Show and referenced on The Simpsons, so there’s a possibility I heard it there.

Or it may be that it’s not unheard of for people of my generation to know about pop culture that preceded us.

My 29-year-old son insists, only half-jokingly, that I’ve ruined him in terms of his conversations with people his own age. Much of his teenage musical taste (Zeppelin, Hendrix, the Ramones) sprung from my MP3 collection and inspired him to continue to drill into the past. But what good is it to know Steely Dan’s entire catalogue if you mention the band to your friends and they look at you as if you’re speaking Esperanto (another old reference)?

Which brings me to Woodstock, 2019, a 50th anniversary brainchild of promoter Michael Lang, who lost his shirt on the original Woodstock at Max Yasgur’s farm in Bethel, New York, because once the crowd reached the population of Hamilton, it was impossible to make them pay anymore.

The new Woodstock, being held on August 16-18, 2019, in that same town of Bethel, will see artists from the original Woodstock — including Country Joe McDonald, Santana, Canned Heat, Dead & Company (the remains of the Grateful Dead) John Sebastian and David Crosby (who was not able to convince Stills and Nash to join him) — plus peers of the era, including Melanie, The Zombies and Creedence Clearwater’s John Fogerty.

They’ll be on a bill with Jay-Z, Halsey, The Killers, Miley Cyrus, Greta Van Fleet, The Lumineers, Imagine Dragons, Cage the Elephant and Portugal, the Man.

If you created a Venn diagram of fans of those two groupings of artists from 50 years apart, the two circles would be so far from overlapping they’d be in different rooms. And one of those rooms might be in a condo in Florida.

There were, of course, two previous Woodstock sequels, in 1994 and 1999. The latter one famously ended in a riot during a performance by Limp Bizkit — kind of a genetic drift from Joni Mitchell’s lyrical characterization of groovy original Woodstockers (“We are stardust, we are golden”). Lang, in announcing Woodstock 2019, said 1994 was “a nice mix of young and old” and that was his target. Except the gap between young and old then was 25 years. Now it’s a half-century.

“Oh yeah, you and mom went there last year. You posted pictures on Facebook of you two drinking tequila shots on a rooftop bar.”

“Yeah, but there used to be a war there.”

I am going to go out on a limb here, and predict the crowd at Woodstock 2019 will be almost entirely young, notwithstanding the occasional presence of some old dudes onstage. I will go to a bar to see a band, but not a stadium.

And if you’ve ever seen an outdoor music festival that skews to an older crowd — like, say, the Mariposa Festival in Orillia, Ontario — you know that comfort is paramount. People show up with lawn chairs and place them in front of the stage, hours before the show, and go off to have a few beers and relax. This is not feasible at an event that will have a mosh pit.

Similarly, I have friends (and a wife) who talk wistfully from time-to-time about attending the Burning Man Festival, which takes place in the Black Rock Desert of northern Nevada. But a little Googling and it occurs to them what it actually means to attend a concert event in the middle of the desert. Short of a plan that involves showing up in a luxury RV, Burning Man remains a non-starter for the wannabe old hippies in my crowd.

All of which is kind of a shame, because if we seasoned veterans did attend Woodstock 2019 (i.e. if they provided a roped-off section with comfortable seats and service), they might be surprised how much some of the new music sounds like the old. Leon Bridges is pure soul, and could have sprung from Motown or Stax records in the ‘60s. Nathaniel Rateliff and the Night Sweats do dirty blues rock that evokes Downchild to me. And I’m a fan of rockers The Black Keys (I used to be in a band that covered their song Lonely Boy).

If they end up streaming the show, my peeps could do worse than checking out the show at home — a preferable alternative, especially if, as in the original Woodstock, everybody ends up rolling in the mud.

Tickets for Woodstock’s 50th anniversary go on sale on April 22, 2019. Click here for tickets and full line-ups for the event.