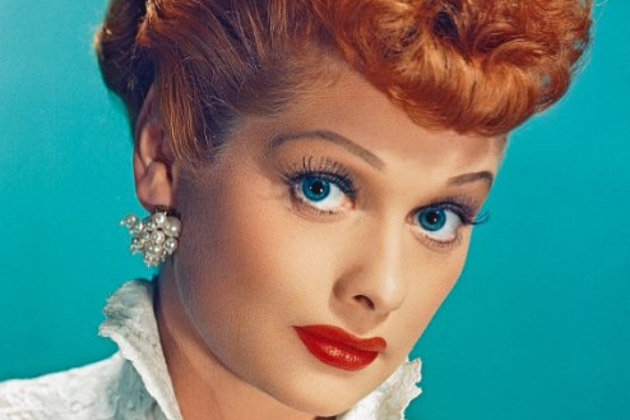 As Desi Arnaz once wrote: “I Love Lucy was never just a title.”

As true as that sentiment was for Arnaz at the time, it continues to hold true for the millions of fans—spanning multiple generations—who follow the hilarious antics of one of TV’s brightest and wittiest stars.

Although Lucille Ball appeared in 72 films over the course of her lengthy career, the stunning model-actress with the flame-red hair remains best known for her iconic title role in I Love Lucy. The half-hour CBS sitcom (which aired between 1951-1957, with 180 episodes) served as a launchpad for a new generation of TV stars and set Ball on her path as one of Hollywood’s trailblazing women.

From the moment the series first aired on October 15, 1951, Ball became an instant household name thanks to her utterly unique and daring brand of physical comedy. Lucy, which centred around Ball’s quirky housewife (and her far-fetched aspirations of fame) and her Cuban-born husband, Ricky Ricardo (Desi Arnaz), left audiences in stitches each week. Throw in TV veterans Vivian Vance (as Ethel Mertz) and William Frawley (as Ethel’s husband, Fred) and you have a recipe for success.

And all the while—as the series demolished competition in the ratings—Ball was doing more behind-the-scenes for women and people over 40 in Hollywood than she’s often given credit for. Here, five reasons why we’ll always love Lucy…

…She broke down social barriers

Remember when the word “pregnant” couldn’t be uttered on television? According to site The A.V. Club, “CBS deemed [it] too vulgar.” Yes, really! Well, Ball went on to become the first pregnant woman to actually play a pregnant woman on TV. The iconic 1953 episode when Lucy gives birth (“Lucy Goes to the Hospital”) was watched by more than 44 million people. In fact, it aired the day before President Dwight D. Eisenhower’s inauguration—and drew more than double the viewers than those tuning in to his swearing-in. Ironically, Ball gave birth to her son, Desi Jr., the same day the episode aired.

…To her, age was just a number

Ageism is real, especially in Hollywood, but leave it to Ball to remove such obstacles. When I Love Lucy premiered on October 15, 1951, Ball had just celebrated her 40th birthday. In addition, her husband, Desi Arnaz, was six years her junior, which was almost unheard of in a time when (much) older men frequently wed up-and-coming young starlets.

…The series was groundbreaking

Not only was I Love Lucy the first scripted series to be shot in front of a live studio audience, but Ball and Arnaz were the first people to portray a multi-ethnic relationship on TV. “CBS and its sponsor, Philip Morris cigarettes, were adamantly opposed to this,” says Kathleen Brady, author of Lucille: The Life of Lucille Ball. “They said that the American public would not accept Desi as the husband of a red-blooded American girl.” Oh, how wrong they were. At the same time, she knew she had to remain “likable” to a 1950s audience that mostly preferred “childlike” female characters. According to Brady, Ball told producers she wouldn’t do the show without the Cuban-born Arnaz. They eventually bent to her wishes and cast Arnaz in the male lead.

…She shattered the glass ceiling

Ball was more than just the star of the show—in 1962 she also became the first-ever female executive to run a studio (Desilu Productions). Her lengthy career in comedy and as an executive (all while balancing motherhood) proved to be an inspiration for women across the globe. Ball also championed the portrayal of female friendships (as evidenced by the hilarious antics shared between Lucy and Ethel) and the roles of other women in the industry—the series’ co-creators and screenwriters were also female. Screenwriter Madelyn Pugh went on to garner three Emmy nominations for her work on I Love Lucy. And, at a time when a 1950s audience preferred “childlike” and innocent female characters, Ball challenged those conventions and portrayed Lucy as a complex, well-rounded woman who was both likable but knew how to assert herself or defy authority. In 2001, more than a decade after her death, Ball was inducted into the National Women’s Hall of Fame.

…A woman ahead of her time

During a 1990 interview with People magazine, Ball was asked what she thought of the burgeoning gay rights movement. “It’s perfectly all right with me,” she responded. “Some of the most gifted people I’ve ever met or read about are homosexual. How can you knock it?”

“Lucy & Desi”: Lucie Arnaz On the New Doc That Allows Her Parents to Tell Their Own Story

As “Being the Ricardos” Hits the Big Screen, Why “I Love Lucy” Remains as Relevant — and Funny! — as Ever