The Battle of Winterfell: The Battle Scene that Made Television History and Didn’t Disappoint 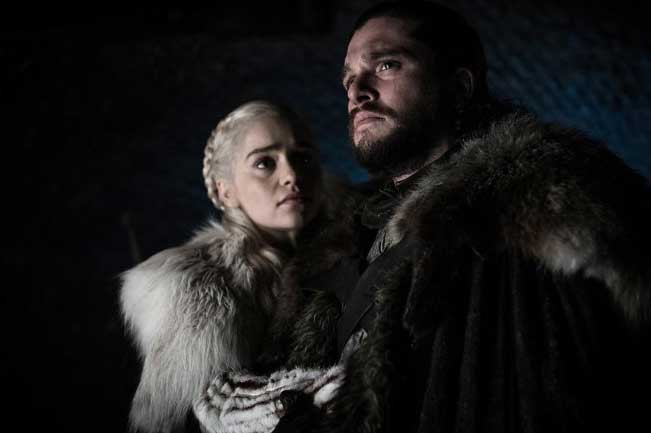 Here’s a thought. If organizers had wanted to boost participation in the lights-out “Earth Hour,” they might have considered timing it to coincide with Sunday’s mind-boggling Battle of Winterfell episode of Game of Thrones.

Certainly, the lights were off at my house, as they were apparently across the continent, for nearly an hour-and-a-half of furious but often dimly-visible nighttime battle. “GoT squinting memes” popped up online overnight.

And, in what may be a shared generational experience, my broadcaster friend and colleague Karen Gordon posted on Facebook that she gave up trying to make out the sword-wielding shapes on TV and watched it on her computer with the “Brightness” on full.

Earth Hour would have even scored bonus time. That episode — the long-awaited clash pitting the armies (and dragons) at Winterfell against the Night King’s army of the dead — clocked in at 82 minutes. That made it the longest GoT episode ever, and according to HBO, the longest battle sequence in film or TV history.

Of course, everyone was watching to see who died. The series, which began eight seasons ago by executing an apparently pivotal character in Ned Stark, has lately taken a break from killing series regulars. There are even fans who don’t enjoy these violent catharses, but tune in for the intrigue and schemes of power.

But that narrative pot can only bubble for so long before all hell breaks loose — whether it be the infamous “Red Wedding,” the Battle of the Bastards or the Battle of Winterfell, the latter of which followed two straight weeks of re-acquaintance, dalliance and anticipation of the White Walkers’ (very slow) approach.

Battle of the Bastards remains my favourite all-violent GoT episode, and maybe the greatest onscreen battle scene ever (if only because I could see all of it). But both Battles were directed by the same guy, Miguel Sapochnik, who could clearly teach Hollywood a thing or two about epic warfare.

In a night where people invariably talked about the ending, it was the beginning that remains etched on my mind — a cavalry charge of Dothraki horsemen, their swords aflame courtesy of a spell by the “Red Woman” Melisandre. It was a literal charge of the light brigade, that light being quickly snuffed out as Jon Snow and Daenerys Targaryen watched in horror from a distance.

As for who died, surprisingly few of the most beloved characters met their Maker. The biggest name being Theon Greyjoy, the coward who redeemed himself, single-handedly killing scores of “wights” in his un-winnable defence of the wheelchair-bound Bran Stark (whose psychic connection to the Night King was intended to lure him into the open).

And I predicted correctly that Jorah would die as he lived, protecting Daenerys.

Perhaps the most touching was tiny Lyanna dying in the act of killing a zombie giant – a David vs. Goliath moment that physically presaged Arya Stark’s own victory over the Night King in that one terrific battle-ending scene.

But for all that, director Sapochnik managed to seamlessly misdirect us to expect far worse. In scene after scene, warriors like Lady Brienne and Jon Snow appeared to be falling in battle. At the moment of the Night King’s demise, Jon Snow was facing incineration from the mouth of the Zombie dragon, and everyone hiding in the crypts – including Tyrion Lannister, Sansa Stark and Varys – were also apparently about to die. Those of us who remember the series’ past cavalier attitude toward character-cide had to briefly think it possible that most of the entire cast could be massacred.

(One character I instinctively KNEW would not die was the cuddly bookworm Samwell, a maladroit warrior voted Most Likely To Die in every skirmish he’s ever been in. That was unlikely to change now. Hats off to Edd, who died keeping him alive one more time.)

Of course, theoretically, more characters could be dead within the rubble. The episode didn’t end with quite everyone getting up and brushing themselves off (though Jon Snow, Daenerys and the crypt gang did). But Game of Thrones does hew to some cinematic convention. Hundreds of fighters may get cut down like wheat, but central characters will invariably get a proper death scene and some final lines. (Also, some characters of technically undetermined fate showed up in the trailer for next week’s episode).

Ah, next week. After a blow-out like the Battle of Winterfell, what’s left for the last three episodes? There’s Cercei Lannister, of course, who reneged on lending forces to the Battle of Winterfell and has been all-but-absent from the screen so far this season. The stage is being set, I guess, for Daenerys and Cercei to clash over the Iron Throne (tho Jon Snow is now an 11th hour contender for same).

On the other hand, after single-handedly saving Winterfell, I think they should just summarily hand over the throne to that badass little Arya.