Happy 8th Wedding Anniversary to the Duke & Duchess of Cambridge! 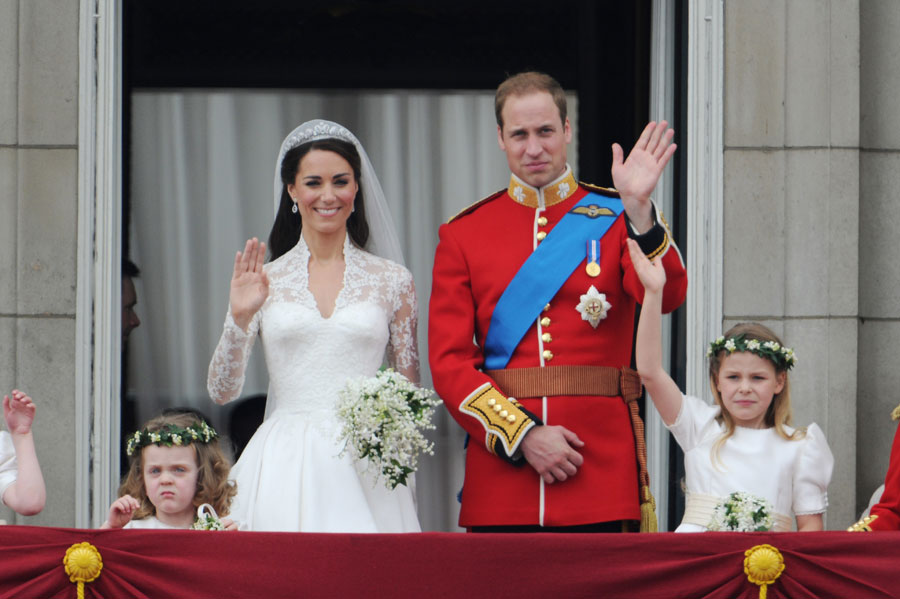 Today marks the eighth wedding anniversary of Prince William and Catherine Middleton. It was on April 29, 2011 that the girl the world had come to call Kate, walked down the aisle to marry her prince.

To mark the occasion the Queen has given Kate the highest seal of approval, that of Dame Grand Cross of the Royal Victorian Order. The award is personally given by the Queen for services to the sovereign.

The couple had a long courtship, having met at the University of St. Andrews in 2001 and lived in the same residence. They began as friends but that blossomed into more once Prince William watched Kate walk down the runway in a bikini and sheer tunic for a charity fashion show.

The public caught its first glimpse of the future royal couple during a ski vacation in 2004 in Switzerland. Still, Will and Kate maintained a certain level of privacy, which would come to an end upon their university graduation in 2005.

From there the media frenzy grew — turning Kate into a modern day Diana — with comparisons made from their similar height to Kate’s choice of wardrobe. Indeed, Kate did seem to borrow style tips from the late fashion icon.

As Prince William and Kate continued to fall in love, the world did too. So it came as a shock when the couple split up in 2006. Friends of the couple stated it was an amicable and mutual decision. But fans of the duo were heartbroken. Everyone wanted to see Prince William happily married and Kate seemed to be the “one.”

He seemed to agree, as the separation didn’t last with the two taking a romantic getaway to the Seychelles in 2007. That year also saw Kate introduced to William’s grandmother, Queen Elizabeth II, at Balmoral. This meeting made for some feverish royal fans to predict an engagement would be imminent. But that next step in the royal courtship would remain elusive.

The couple’s first official photos that stated clearly they were “back together” came in 2008 after the Prince received his “wings” from the Royal Air Force. Again, royal watchers gossiped and predicted that surely, this year, would come an announcement.

Alas, it wasn’t until November 2010 that the couple made their engagement official, even though Prince William had proposed to Kate earlier in the year while on safari in Kenya. William presented Kate with one of his mother’s rings, a gorgeous blue sapphire and diamond ring. The couple’s fans breathed a collective sigh of relief.

And then, that beautiful day in April, 2011, the wedding. Watched the world over, it had echoes of the July 1981 wedding of William’s parents, Prince Charles and Lady Diana Spencer. The wedding made a celebrity out of Kate’s sister, Pippa, whose derriere became a cheeky celeb in its own right. Prince Harry stood up for his brother, as we’d see William stand up for Harry in 2018.

Prince William and Kate, the Duke and Duchess of Cambridge, now have three children, Prince George, 5, Princess Charlotte, 3, and Prince Louis, 1. We can only wonder how they are celebrating their anniversary, they did post on their official Instagram account the message: 8 years ago today — thank you for your lovely messages on The Duke and Duchess of Cambridge’s wedding anniversary, along with several photos from the magical day. It’s a Prince! William and Kate Announce the Birth of Their Third Child