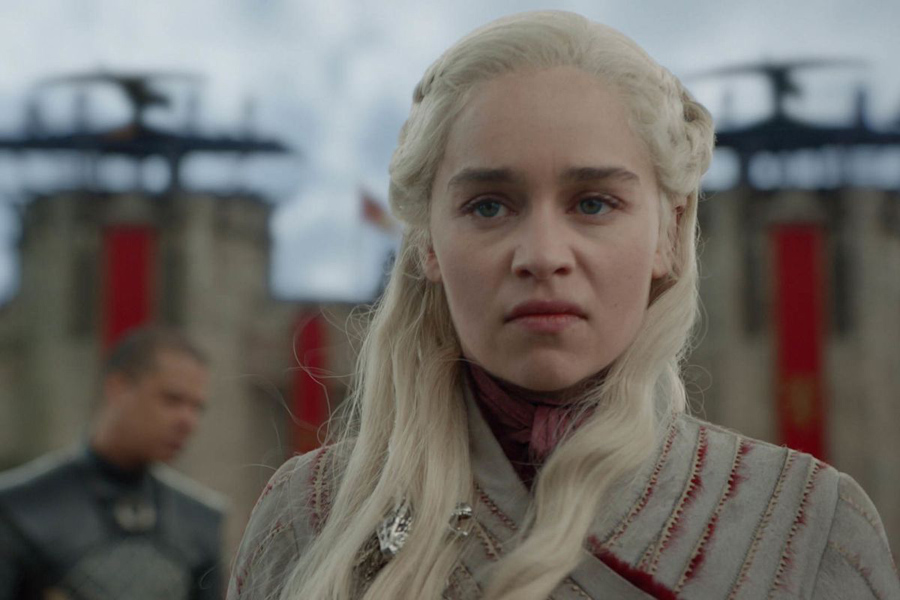 So now, Daenerys Targaryen is technically the Mother of Dragon, singular. And the Queen of Bad Ideas. This, in an episode of Game of Thrones that was full of bad ideas.

You just evaded mass death, suffering heavy losses defeating an apparently unbeatable zombie army and killing its infernal leader, and someone asks you, “What are you going to do next?”

The proper answer more than a millennium later would be, “I’m going to Disneyland!”

Instead, in episode four of this final season, following last week’s stunning Battle of Winterfell, Dany barely allowed her remaining armies to get Animal House-level drunk before she was resolving to continue to King’s Landing posthaste and dethrone the cunning usurper Cersei Lannister.

This, despite an injury report from Sansa Stark (admittedly, not a Khaleesi fan) that suggested they take time to recover.

And more importantly, this was despite the state of her dragons, Drogon and Rhaegal. Both had been wounded in the previous week’s battle, and poor Rhaegal had holes in his wings.

Yeah, sure. Let’s dust ourselves off and head off to battle once more. Poor Rhaegal.

But first, let’s party like it’s 1999, and conduct palace intrigue like high school students in a John Hughes movie. In the first of the episode’s many heartbreaks, Jon Snow tells Daenerys that he no longer loves her “that way,” she being his aunt and all. In return, he promises to keep secret his provenance and legitimate claim to the Iron Throne.

Secret blown in three… two… one…

Jon feels compelled to tell his sisters Arya and Sansa and make them swear not to tell anyone else. Having so sworn, Sansa immediately tells Tyrion.
Let in on the secret, Lord Varys opines to Tyrion, “If eight know, soon hundreds will.” Hell, at this rate, thousands!

The big drunken Winterfell party was fun, though, heartbreak and all. Tyrion and Jaime played a drinking game with Brienne and Podrick that was like a medieval version of Truth or Dare. Brienne, suddenly the belle of the ball, dealt with the usual advances from the lovable, drink-spilling Tormund. But he was blocked by handsome Jaime Lannister, who finally acted on his intentions.
In that John Hughes movie, think of Jaime as Andrew McCarthy and poor Tormund as a goliath-sized Ducky. We know, in retrospect, who she should have ended up with.

Instead, Brienne ended up broken-hearted when Jaime apparently reconnected with his evil self (on hearing news that Cersei’s navy dealt a crushing blow to Grey Worm’s fleet and, yes, downed one of the two remaining dragons). He’s last seen leaving to, oh, I don’t know, go back to sleeping with his now-pregnant sister?

Whatever, the most bad-ass woman warrior in Winterfell this side of Arya Stark was left crying like a schoolgirl. This was generally not an episode that was kind to its female characters.

Other broken hearts: Gendry, who offered Arya his hand and the title of Lady of Storm’s End. Nice try fella. And Grey Worm would see his beloved Missandei executed before his eyes.

That was courtesy of one bad idea, Tyrion convincing Daenerys to bring troops to the gates of the castle at King’s Landing and demand Cersei’s surrender.
And to be fair, that bad idea was meant to head off an even worse one — Daenerys’ sudden, nearly sociopathic apparent willingness to kill civilians (and everyone else) in King’s Landing to gain the throne.

Having suffered Jon Snow’s rebuff and having grieved the death of her mentor Jorah, her dragon and now, her trusted advisor and handmaiden Missandei — the stone cold look on Daenerys’ face at the episode’s end suggested moral considerations were now out the window. Guilty or innocent, anybody in her way, at King’s Landing or Winterfell, is a sworn enemy.

One bright spot for Daenerys, however, is that she’s not the person responsible for leaving a Starbucks cup in the middle of a shot, a screen grab of which went viral on social media the morning after the episode aired (see the screen grab below). So far as we know, there’s no actual Starbucks location in Westeros, but in a world filled with dragons, White Walkers and mystical beings who can raise the dead, is it such a stretch to believe that someone opened a coffee shop to offer your favourite GOT characters their caffeine fix?

At this point, it’s also fair to bring up the web article written a few weeks ago by Democratic presidential candidate Sen. Elizabeth Warren, who declared herself on Team Khaleesi. Daenerys was the contender for the throne she saw as pure of heart and intention, dedicated to overthrowing the rich and powerful (which would be Cersei, who’s more dedicating to throwing money at her war effort).

It was also clear at certain points the admiring Warren was comparing herself with Daenerys.

I’m sure she didn’t envision her heroine transitioning into a potential war criminal. Varys has a potentially treasonous conversation with Tyrion regarding Daenerys’ murderous authoritarian Targaryen tendencies — RIP slave owners of Meereen and Samwell Tarly’s father and brother — a quality tempered in Jon Snow, aka Aegon Targaryen, aka rightful heir to the Iron Throne, presumably due to his Stark blood. But let this be a lesson for politicos who want to weigh in on shows like Game of Thrones. Script writers are like pollsters — they can’t be trusted.