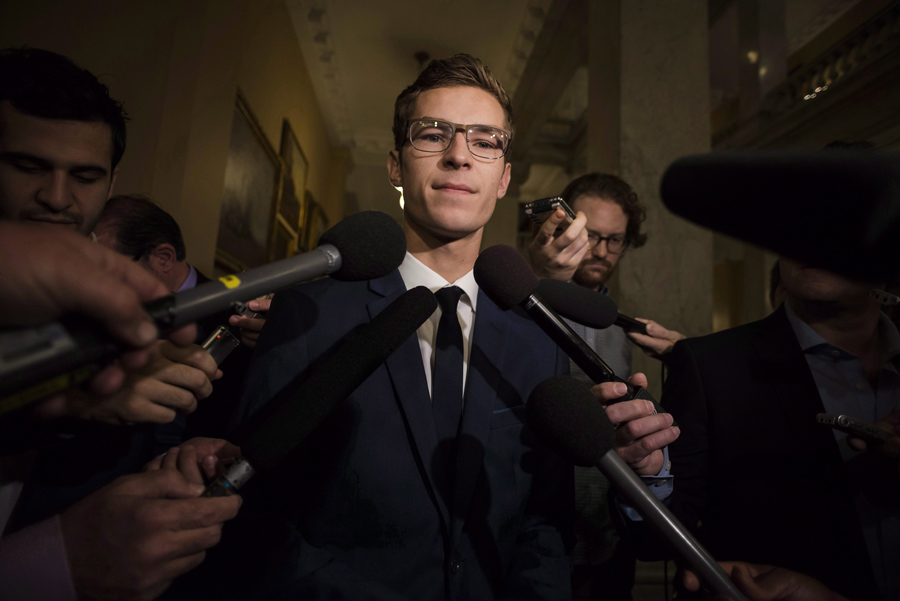 The right to free speech and the right to protest — they’re core freedoms that all Canadians enjoy. Well, perhaps, not all Canadians. On Tuesday, staffers who work in the Beamsville, Ont., office of Conservative Niagara West MPP Sam Oosterhoff called the police on a group of protesters who’d gathered outside the premises.

But far from the angry mob wielding pitchforks and torches intent on ushering in all-out anarchy, the 15 protesters who gathered in front of Oosterhoff’s office brandished books. Yes, books. And they weren’t even all hardcover.

Indeed the protesters were, as the St. Catharines Standard noted, “retirees and seniors, some of whom are members of a classic book club in Wainfleet, [who] had planned to read their books in the Niagara West Tory MPP’s Beamsville office in silent protest.”

According to the Standard, those seniors who showed up did so to protest, “the provincial government’s 50 per cent cut in funding to Southern Ontario Library Services, from $3.1 million to $1.5 million. Because of the cut, SOLS on April 26 terminated its delivery service which transported books between 153 libraries in Ontario. The service allowed readers to get copies of titles their local libraries didn’t have.”

Some of the protesters also simply wanted to talk with Oosterhoff about the importance of libraries, including those who relied on the SOLS delivery service to maintain their community book clubs, which are now in danger of shuttering.

“For all I know it might be the end of our club because how can we have a book club without books?” protester Janet Hodgkins told the Standard. She added of the protest, “I don’t think we looked threatening.”

When Oosterhoff’s staff warned they’d call police on the protesters, the seniors in turn asked to schedule meetings with the MPP — the Standard notes they were told that “Oosterhoff is only in the riding on Fridays and is booking two months in advance. He will only meet with constituents who live in his riding because he is so busy with appointments.”

Then, after some of the seniors peacefully left letters for Oosterhoff outlining their concerns, they stopped to discuss the issue with reporters from the Standard. That’s when the cops showed up, called by the MPP’s staffers even though the seniors had exited the premises.

Oosterhoff himself tweeted about the interaction, claiming that, “After the individuals would not leave my office following their protest, in order to protect individuals coming in for private meetings the staff needed assistance to clear the office.” Reporters for the St. Catharines Standard noted explicitly, however, that the protesters were peaceful and that, “The group had cleared the office prior to police officers arriving.”

Oosterhoff himself is no stranger to making headlines. On the positive side, he’s the youngest Ontario MPP in history, having been elected in 2016 at age 19. But he’s also courted his share of controversy. In the past the uber-religious politician reportedly called homosexuality “a sin” on social media while opposing same-sex marriage legislation as an MPP. He’s also blurred the lines between church and state, declaring in a 2017 Christmas video that, “We live in a broken world. And we live in a fallen world” and that, thanks to the birth of Christ, “to us a child was born. To us a son is given and the government shall be upon his shoulders.”

And last year, Oosterhoff’s appointment as parliamentary assistant to Education Minister Lisa Thompson came under fire because, as Narcity wrote at the time, “Oosterhoff was homeschooled his entire life, meaning he has never been in the Ontario public school system, the part of Government that he is now in charge of.” The story also noted concerns among many Ontarians that Oosterhoff’s staunch religious beliefs and past comments about homosexuality would impact his work in overhauling the province’s sex-ed curriculum.

Of course, if Oosterhoff wanted to expand his knowledge of issues related to homosexuality to better understand why many Ontarians have concerns, he could request some books on the subject from his local library. Oh, wait…