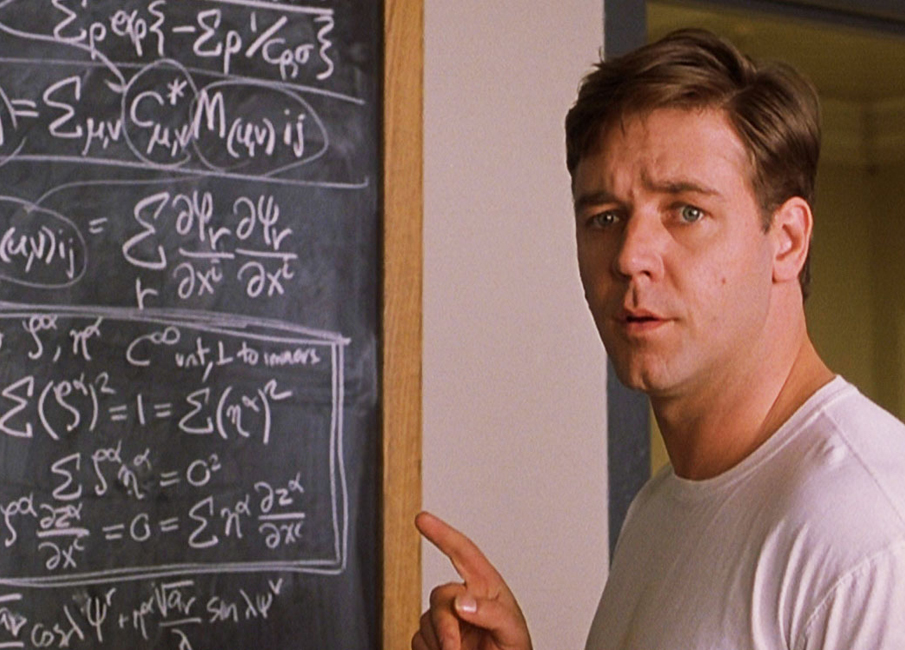 A scene from "A Beautiful Mind" courtesy Universal Pictures.

“You can’t come up with a formula to change the way you experience the world,” Alicia Nash tells her husband John Nash, the brilliant mathematician who battled paranoid schizophrenia and went on to win a Nobel Prize, in the Oscar-winning 2001 biopic A Beautiful Mind. And it’s true.

For those who battle mental health issues daily, or those who attempt to understand more about what that battle entails, movies can offer invaluable insight into the experiences and struggles sufferers endure. Sure, there are a lot of bad or inaccurate movies about mental health, but there are also some quality films that tackle issues ranging from dementia to paranoid schizophrenia to anxiety, gaslighting, autism, OCD, depression and others. And such films not only offer audiences an intimate glimpse into the lives of those struggling with mental health issues, but they can also serve to help destigmatize such issues and open/widen the public discourse around them.

At the onset of Mental Health Week 2019, Canadian PM Justin Trudeau declared that the initiative, “encourages everyone to talk freely about what mental health means to us and listen compassionately to the stories of others.”

The films on this list tell the stories of others, both of those on the screen and so many more who see themselves and their own struggles in the subject matter.

So in honour of Mental Health Week, we look back on nine of our favourite feature films that shine a light, and offer some insight, into mental health issues that many still struggle with today. You have this Ingrid Bergman film to thank for the term “gaslighting,” which has gained traction in popular vernacular in recent years. Psychology Today describes the term as “a tactic in which a person or entity, in order to gain more power, makes a victim question their reality” and notes that “it is a common technique of abusers, dictators, narcissists, and cult leaders … [and] is done slowly, so the victim doesn’t realize how much they’ve been brainwashed.”

The film, Gaslight, in which a man slowly convinces his wife that she’s going insane, depicts just that, and it went on to earn seven Oscar nominations. It took home two awards, including Bergman’s win for Best Actress. Its lasting contribution, however, lies in the “gaslighting” term it inspired, which is routinely used today to describe everything from behaviour in abusive relationships to the tactics of the President of the United States, Donald Trump, who routinely lies, manipulates and distorts reality while creating “alternative facts” for his followers to applaud.

This big screen classic became only the second film in history to take home the Big Five Oscar statuettes — Best Picture, Best Actor, Best Actress, Best Director and Best Adapted Screenplay — but it also served a greater purpose in shedding light on the treatment of people suffering from mental illness. A story from Screen Rant notes that, “The themes of the film included the gross mistreatment of psychiatric patients in the sixties and the criminalization and ostracization of free-thinking, anti-authoritative people. The film features characters who suffer from anxiety disorders, epilepsy, deafness, muteness, and other diagnoses.” And along with bringing the treatment of people with mental health issues and illness to the forefront, the film nabbed five of the nine Oscars it earned nominations for while gaining accolades from the United States Library of Congress and preservation in the National Film Registry. A young man dies tragically in a boating accident, sending his family reeling into a tailspin of grief, PTSD and survivor’s guilt in what many call a textbook example for depicting psychiatry in film. Just ask the U.K.’s Royal College of Psychiatrists, which calls the film, “a wonderful starting point for a discussion about the indications for individual psychotherapy and family therapy and accurately illustrates the psychological resistance of a family member to any form of outside intervention that can so seriously interfere with the healing of the whole family.” And just as important, the Royal College adds that, “Ordinary People highlights the stigma that still surrounds psychiatric treatment for many people and perhaps helps us to understand why there is an urgent need to encourage awareness amongst young people about depression, suicidal feelings and the help that is available.”

The film also serves as Robert Redford’s directorial debut — for which he won the Best Director Oscar, one of the four Academy Awards it nabbed — and marked a stark transition for comedy legend Mary Tyler Moore, who muted her comic instincts to deliver an Oscar-nominated dramatic performance. It’s certainly not the perfect depiction of autism in popular culture, but the film, which stars Dustin Hoffman as Raymond, a strict, emotionless autistic savant, did help to bring awareness to a condition that was all but a mystery to most in the late 1980s. There are, of course, varying subtypes of autism and Rain Man has been criticized for its lack of understanding when it comes to that point. For example, a post by Nils Skudra on the Art Of Autism website, notes that, “[Raymond’s] doctor states that ‘most autistics don’t communicate’ and that Raymond is ‘very high functioning.’ However, the subsequent three decades of advances in medical understanding of autism, together with firsthand experience of interacting with people on the autism spectrum, have demonstrated that while many autistic individuals are unable to communicate verbally, there are also innumerably more who, while challenged in their social interaction, can do so and are perfectly articulate.”

Still, the film boasts many redeemable qualities — Skudra writes that it “captures with striking accuracy the sensory difficulties and high anxiety levels that accompany autism’s positive aspects” — and served as the first major film to bring the condition into the public consciousness. The story of John Nash, a brilliant mathematician who battled paranoid schizophrenia and went on to win a Nobel Prize, earned accolades from critics and fans alike, riding an award season wave of popularity to four Oscars, including Best Picture. In the film we see Nash, played by Russell Crowe, deal with his condition from its onset, eventually forsaking drug treatments that negatively affect other aspects of his life to conquer the condition by force of sheer willpower. Dr. Ken Davis, chairman of psychiatry at Mount Sinai School of Medicine, called Crowe’s performance, “a brilliant job of portraying the mannerisms, and some of the behaviours of a schizophrenic — the best I have ever seen on the screen,” in an interview with ABC News, though he adds that, “On the other hand, the notion that willpower can really overcome schizophrenia is ludicrous.”

Meanwhile, an analysis from Ohio State University notes that, “this movie is able to accurately portray the intricacies of schizophrenia to the audience … this movie is a great and accurate example of what is it like to live with schizophrenia and has the ability to educate individuals about what is known about this disability.” However, it does concede that Nash’s ability to overcome his schizophrenia through willpower, while heroic, does seem implausible. Billionaire business magnate Howard Hughes endured a very public and high-profile struggle with obsessive compulsive disorder during his lifetime, and his obsession with cleanliness and germs is highlighted in Martin Scorsese’s Oscar-winning film. Starring Leonardo DiCaprio as Hughes, the film depicts his early struggles with OCD — bringing his own soap to public restrooms and other germ-related precautions — to his descent into paranoia and eventual need to isolate himself in a germ-free space.

“The Aviator provides a realistic and sensitive portrayal of one man’s decades-long struggle with OCD,” according to the Obsessive Compulsive Disorder (OCD) and Related Disorders Program at the Massachusetts General Hospital and Harvard Medical School.

The Royal College of Psychiatrists agrees, writing that, “this film provides tremendous insight into the thoughts and compulsions that can cause [OCD] sufferers so much distress. It also illustrates the fact that depression may arise in association with untreated OCD and can contribute to the burden of illness. The Aviator helps us to imagine how it might feel to be close to someone with OCD who has not yet sought help.” Search the internet for the best depictions of mental illness in film and you’ll invariably find Silver Linings Playbook on most of the lists. The story of a young bipolar man released from a psychiatric hospital and hoping to reunite with his estranged wife through the help of a young widow wracked up a slew of Oscar nominations and other awards, but it also resonated with audience members who saw it as a relatively fair and balanced depiction of manic depression and bipolar disorder. It isn’t a perfect film, and it does have its flaws when it comes to the depiction of mental illness — it is Hollywood after all — but Dr. Steven Schlozman, a psychiatrist with Harvard Medical School, told Vulture that, “they did a very nice job of depicting manic depressive illness or bipolar disorder in somebody who’s quite bright, and who has limited but present insight on it.” “What’s really powerful about this film is how accurate it is to cognitive, developmental, and clinical psychology,” clinical psychologist Dr. Janina Scarlet wrote in Psychology Today. In fact, rather than focus on a singular mental health condition, this brilliant Oscar-winning Pixar film highlights the varied cognitive responses, processes and emotions that all humans experience through the lens of an 11-year-old girl who finds herself feeling lonely and isolated after moving to a new city with her parents. It’s a film that offers insight into why we feel happy sometimes and sad, or angry, or scared other times and, just as importantly, why that’s perfectly okay.

“The most important [message of the film] is this — our emotions are all important, every single one of them. They all serve an important function and we cannot selectively feel some but not others. It’s an ‘all-or-none’ deal,” Dr. Scarlet adds. “The movie also shows that everyone experiences these emotions, as they are, in fact, universal. This demonstrates a psychological concept of common humanity, or the idea that other people are just like us, they might struggle with the same emotions, insecurities, heartbreaks, and neuroses as we do, further validating our internal experiences.”

And as a bonus, this is a great film to share with the kids/grandkids. A heartbreaking portrait of a vibrant, active, 50-year-old linguistics professor named Alice, played by Julianne Moore, who receives a diagnosis of early-onset Alzheimer’s disease. The film depicts Alice’s slow regression from her early warning signs to the point when the illness takes over her body. It’s not an easy film to watch or one with a magically happy ending — nor should it be.

As Alzheimer’s rates continue to rise, films that offer an honest depiction of the effects of the disease, but also the humanity and support that can be gained in the wake of it, prove all the more important. And, according to the U.K.’s Guardian, the film earned praise from people currently battling various forms of dementia.

The publication interviewed multiple people with dementia who saw the film and gaged their reactions, with most proving quite positive. One man, named Keith Oliver, who, at 54, was diagnosed with the same form of Alzheimer’s as Alice, said, “The film confronted each stage I’ve gone through, like a checklist. It captured how dementia crept up on me, how it knocked my self-esteem and brought doubts into my mind before I even knew what I was dealing with. It captured how insidious the disease is, how it can subtly eat away at you. It captured how I tried to fight it, how I found coping strategies, how I tried to hide it. But her decline happens so quickly – I found that very difficult to come to terms with.”