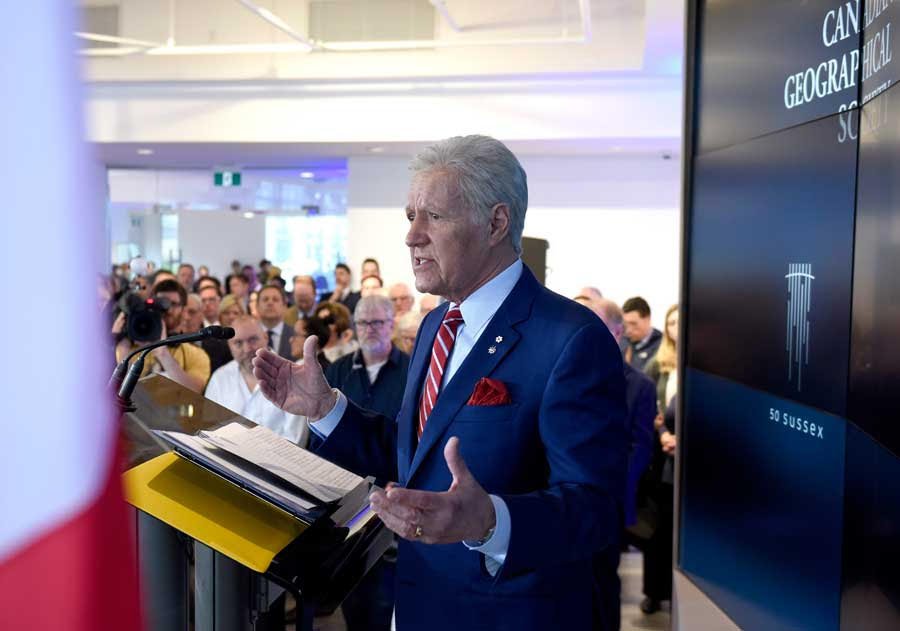 Jeopardy! host Alex Trebek speaks at the Royal Canadian Geographical Society during the official opening of Canada's Centre for Geography, in Ottawa on May 13. (Photo: The Canadian Press/Justin Tang)

Hosting the enduringly popular Jeopardy! quiz show night in and night out for 35 years, Alex Trebek might be forgiven for calling in sick, just once.

But in a pair of revealing interviews that aired last night — with CTV and CBC — the immensely charming 78-year-old who announced in March that he has Stage 4 pancreatic cancer, says he is refusing to let his sickness interfere with his day job.

“The last chemo (treatment) was three days ago and it didn’t bother me the first day. But then, for some reason after a few days, it starts to gang up on you,” Trebek told CBC’s Rosmary Barton, while he was in Ottawa hosting an event for the Royal Canadian Geographical Society, of which he’s honorary president.

The Sudbury native also relied on his typically droll humour while downplaying the excruciating stomach cramps that have plagued him since his diagnosis — “I’m Canadian. I played hockey. I’m a tough guy.”

Trebek explained why he’s adopted a positive frame of mind, which is reminiscent of how another Canadian, Team Canada hockey legend Paul Henderson, dealt with a cancer diagnosis.

“You’ve got a choice,” Trebek says. “You can be pessimistic or you can be optimistic. It’s a lot better to be optimistic because you stand a better chance of helping to cure yourself.”

The beloved host, who broke into television in the ’60s on the CBC (where he hosted the old “Reach for the Top“ gameshow) says he’s been overwhelmed by support from across North America. “I’ve gotten messages from people all across America and Canada. Prayers, advice — I’ve had so many masses said on my behalf.”

Trebek also believes that by going public with his diagnosis, he can help the millions of people who are living with the disease.

“If I can be a spokesperson for pancreatic cancer victims and give them some reason to feel a degree of hope, that is a wonderful positive in my life and I appreciate having that opportunity,” he told CTV’s Lisa LaFlamme.

And he hopes that his optimistic outlook will pay dividends with his treatment.

“The outcome to a great extent is out of my hands, but to a certain extent, it’s within my realm also,” he told CTV. “By having a positive attitude, I can affect whether I will succeed in overcoming the statistics regarding pancreatic cancer.”

Aretha Franklin, Pancreatic Cancer and Me