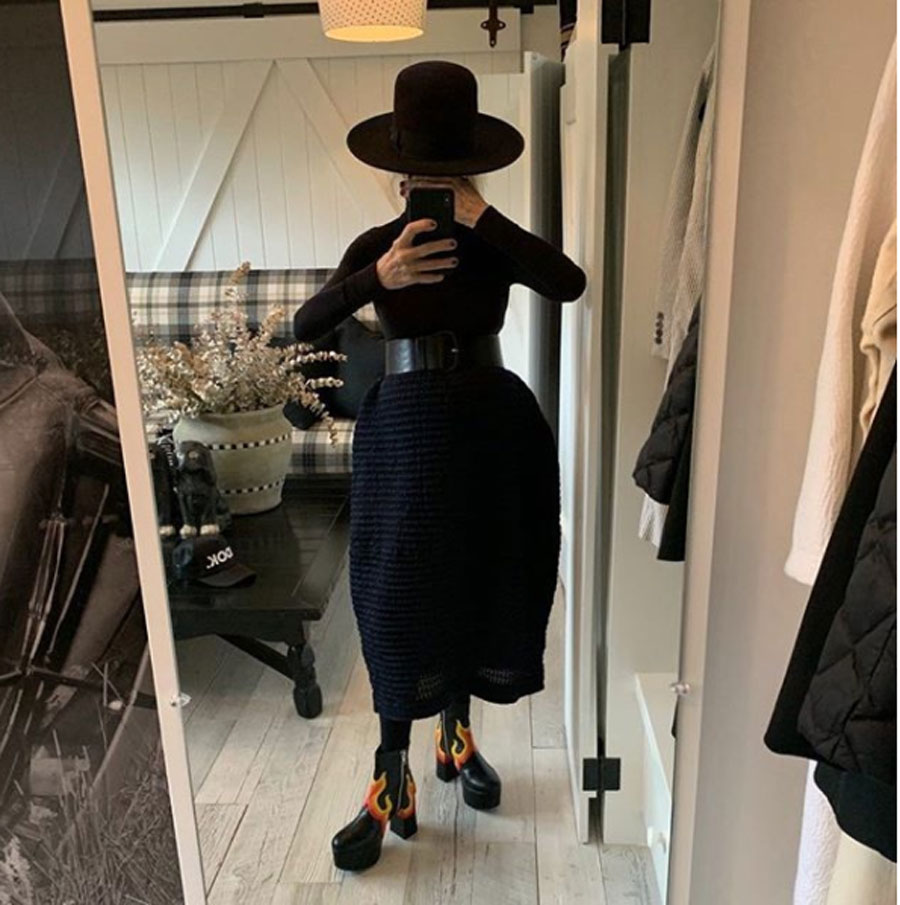 Diane Keaton, 73, has brought her irrepressible style game to social media, and now has some 940,000 followers keeping tabs on her outfits each day. As Harper’s Bazaar put in its recent tribute to the style icon: “Diane Keaton is now a fashion blogger and the rest of you can go home.” @diane_keaton joined Instagram in 2015, and early followers got a window into her off-beat personality and passions (hint: golden retrievers and, weirdly, a clown obsession). But it was when she first began posting “TODAY’S OUTFIT” last December — she isn’t shouting, like some, when she uses ALLCAPS; rather she says she just prefers the aesthetic of the filled-out font— that attention for the account, and her follower count, exploded.

The 73-year-old had a new movie hit theatres this past week, Poms, her 68th film, in which she plays a terminally ill woman who mobilizes the girl gang at her retirement home to try out as a cheerleading squad. But it is her renewed status as a fashion influencer that is really on fire. Her selfie snaps highlight her signature style: monochromatic colour schemes of black, white or camel, baggy pants, chunky boots, menswear blazers cinched with a thick belt, and of course, men’s hats. Bowlers, wide brims, bolo hats, hats are her thing, and she has owned that look since her iconic turn in Annie Hall, in 1977. In that seminal film, her frequent collaborator, director Woody Allen, allowed her to dress herself.

She and the costume designer for the film bought and borrowed a bunch of Ralph Lauren, which was on trend for the androgynous street style of women in New York that summer of ’77. But it was Keaton (whose actual real last name is in fact Hall) who put the baggy khakis together “her” way with the oversized vest, unbuttoned shirt and tie to invent the modern tomboy look. Sure, Katharine Hepburn gave great trouser long before her, but Keaton was the one who demonstrated a whole new way to dress. She also made neurotic into a charming personality trait and quirky into a fashion option.

Keaton may not have the gabillions of followers of a young pop culture star like Ariana Grande or a Kardashian. But what she does have is its highest-quality commenters. To wit, her looks get called out by Gwyneth Paltrow! She had Debra Messing and Carol Bayer Sager fawning over some (fantastic) wide-legged Margiela jeans! She gets shout outs from Michelle Pfeiffer! And Lisa Kudrow! What is most appealing, and what has earned her the unofficial title of Best Dressed Woman on Instagram from The Daily Mail tabloid, is that she posts in her own, real dressing room mirror. She uses no fancy filters, nor is she fussy with cropping or hash tags, or precious with captions or makeup looks (she basically wears no makeup and worries not about her lighting or her good side).

In other words, Keaton is a woman comfortable in her own skin. As a rare actor of her age who has repeatedly spoken out about shunning plastic surgery and has long embraced her own natural white hair, Keaton’s confidence is what she is peddling. Her style, unbowed by time and as fresh as ever, is inspirational for every age of woman. She is her own stylist, and she has no interest in #spon-con or hashtag logrolling. She shows just what she is actually wearing, for normal days out and about. And we want every, single, outfit thanks. Keaton is witty, re-posting pics people send her of themselves dressed up like her. And just as she struck a nerve in the 1970s, embodying liberated urbane women from skirts and heels, today she represents cool grandma’s everywhere. After building a resume that ranges from The Godfather saga, through Reds and on to her status as the foremost later-life rom-com lead beginning with Something’s Gotta Give, her 2003 collaboration with  director Nancy Meyers, that set a new bar for older-woman leads; it was the natural culmination of her double turn in the 90s as the hot Mother-of-the-Bride in the remakes of Father of the Bride alongside Steve Martin.

Her most recent iteration is as part of a wave of women’s buddy movies (a run that encompasses 2018’s Book Club and stretching back to the much-loved, sharp-edged, 1996’s First Wives Club. But the common denominator is that Diane Keaton always comes off as Diane Keaton, her style consistent over time, onscreen and off. She has expressed admiration for the more craft-driven actors of her generation — Jessica Lange, Meryl Streep — protesting instead that she is more a “performer,” in her own wording. That means she lives in the moment, and aims for truth and authenticity. And those three very human elements happen to be in very short supply on social media, which is why she stands out as such a refreshing palette cleanser. Keaton is no more thrilled about aging than any of us are, but she isn’t fighting it. As she told the LA Times on her current press tour: “I know what I am by now,” she says. “I know how old I am. I know what my limitations are and what I can and can’t do. So if something appeals to me, I’m definitely going to go for it.”

And that means brainy and self-conscious, confident and insecure, a bit dorky, and shamelessly so. What Keaton is is a true original. So of course we all want to see what she is wearing today!