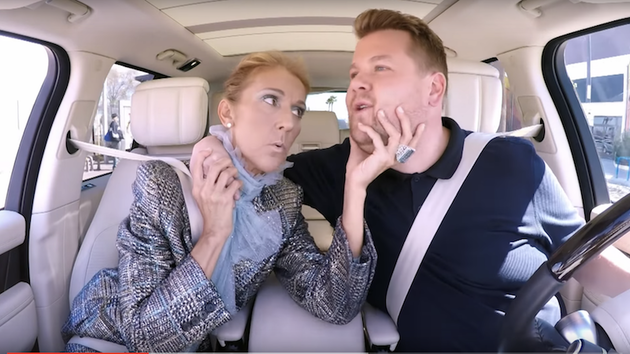 If James Corden’s Late Late Show segment “Carpool Karaoke” was getting a little tired and repetitive, Celine Dion was the splash of cold water (or perhaps something much stronger) it needed.

From the moment Celine sat down in the passenger seat next to the late night host, it was clear that this episode was going to be anything but typical.

The high energy vocal powerhouse was ready to entertain from the onset. After Corden asks if she’s excited, Dion breaks into song all on her own, belting out the chorus of the Pointer Sisters’ hit “I’m So Excited.”

From there, Dion moves seamlessly into a variety of performances ranging from her own hits to Rihanna’s to a chest-pounding rendition of the contagious kid’s song “Baby Shark.”

The segment, which was shot in Vegas, ends with the pair pulling up to the Bellagio Hotel and Casino for an over-the-top performance of “My Heart Will Go On” aboard a small replica of the Titanic inside the hotel’s famous fountain.

Dion caps off the performance by dropping a replica of Rose’s heart of the Ocean blue diamond necklace into the water.

Her appearance on The Late Late Show comes as Dion approaches the end of her Las Vegas residency in June, which she’ll follow up with a world tour that kicks off in Quebec City on Sept. 18.