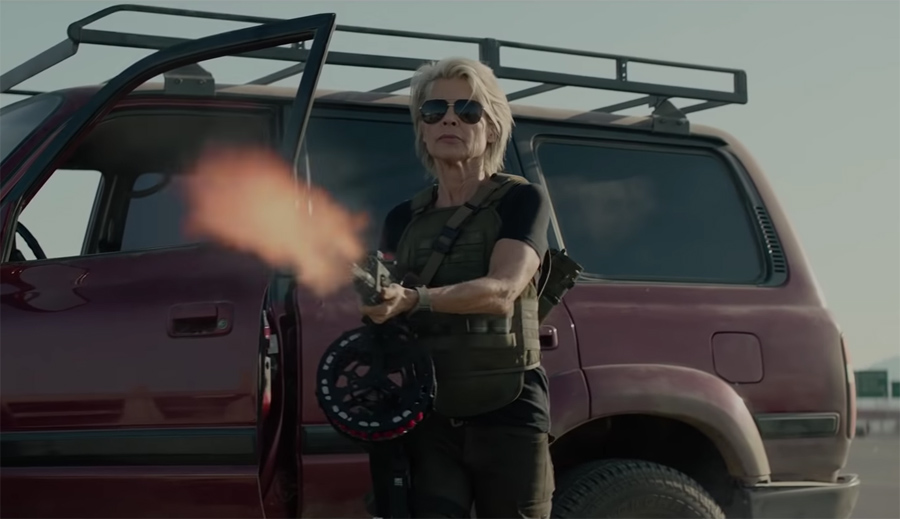 The last time Linda Hamilton appeared on the big screen as Sarah Connor in a Terminator film, The Golden Girls was still on the air, actor Wilford Brimley served as the grandfatherly pitchman for Quaker Instant Oatmeal and the famous “I’ve fallen and I can’t get up” commercials for the LifeCall medical alert bracelets managed to make a meme out of the idea of seniors falling years before memes even existed.

Fast forward 28 years and boy has our idea of what it means to be a sexagenarian changed. And as the first trailer for the upcoming Terminator: Dark Fate film proved when it dropped today, Hamilton, at 62, ain’t no Golden Girl.

Terminator: Dark Fate is less a sequel and more a shequel, with Hamilton stealing the trailer via her kick a** swagger and ripped muscles as she comes out guns a-blazing, threatening to make scrap metal out of any Terminator who gets in her way.

The film, directed by Canuck James Cameron, 64, who helmed the first two Terminator movies,  serves as a direct sequel to that original pair and features a dangerous prototype Terminator (played by Marvel’s Agents of S.H.I.E.L.D. actor Gabriel Luna) on a mission to hunt down a young female hybrid Terminator (actress Natalia Reyes). A part human-part machine assassin played by Vancouver-born actress Mackenzie Davis is tasked with protecting the young target, while Hamilton reprises her role as Sarah Connor from the two original Terminator films — and for the first time since 1991’s Terminator 2: Judgment Day — returning to put the evil Terminator on blast.

And why not? Hollywood happily embraces male stars like Terminator franchise star Arnold Schwarzenegger, 71, and Sylvester Stallone, 72, who reprise action hero roles decades later (Arnold is set to play Conan the Barbarian again in an upcoming sequel while Stallone’s got at least one more turn as Rambo and another Expendables movie in the works). It’s high time, then, that the ladies get in on the action. And we’re not talking about pairing the septuagenarian male stars with female butt-kickers young enough to be their granddaughters. We’re talking about an actress like Hamilton, who’s redefining what it means to be a woman in her 60s.

Speaking of Arnold, he does appear in the trailer toward the end, this Terminator having grown a white beard and living in a cabin in the woods. It’s a strange sort of semi-retirement for a robot who apparently possesses the capacity to grow facial hair, but hey, Arnie, you do you. Meanwhile, social media blew up this morning with fans overjoyed about Hamilton’s return.