An Ode to The Ultimate Camp Film: “Boom!” Gets Another Shot With DVD/Blu-Ray Release 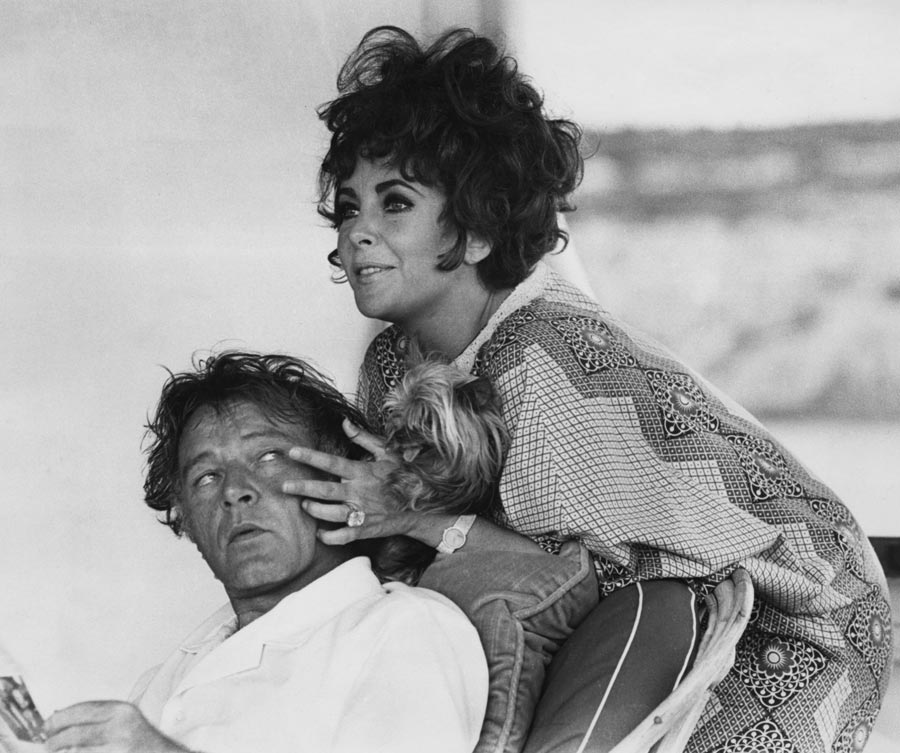 Elizabeth Taylor and her husband, actor Richard Burton on their yacht 'Kalizma' off Capo Caccia on the coast of Sardinia, August 1967. They were both there for the location filming of 'Boom' by Tennessee Williams. (Photo by Express/Hulton Archive/Getty Images)

Elizabeth Taylor’s signature headpiece from the 1968 cult classic Boom! has inspired drag queen costumes, Dolce and Gabbana runway styling and the tribute headpiece Crazy Rich Asians star Gemma Chan wore to the Met Gala in early May. That most recent homage is especially apt, since it was the red carpet opening of the Costume Institute’s seasonal show “Fashion: Notes on Camp.”

The Met exhibition is built around Susan Sontag’s 1964 musings on the notion of camp, a sensibility that revels in artifice, stylization, theatricalization, irony, playfulness, and exaggeration rather than content. Camp, Sontag posits, is art that proposes itself seriously, but cannot be taken altogether seriously because it is ‘too much.’ Likewise the camp cult classic Boom!, one of eleven films that iconic real-life Hollywood couple Richard Burton and Elizabeth Taylor made together, which in spite of being marketed to capitalize on the pair’s previous hits like The Taming of the Shrew, was also a notorious critical flop.

With a pipe organ score and a pet monkey, Boom! is the ultimate camp classic and truly has to be seen to be believed. And now you can, because after years of being unavailable Boom! is finally getting a DVD/blu-ray release. But before you strap in and press play, here’s everything you need to know about why this fascinating failure is essential Taylor/Burton viewing.

A WHO’S WHO CAST

Taylor plays Sissy Goforth, a much-married widow who is the wealthiest woman in the world. She’s a sickly recluse who reigns on her own private island, dictating her memoirs while attended by doctors and servants. (But make no mistake: even through a mask of full heavy makeup by Alberto De Rossi, the same artist from Cleopatra, Taylor is radiant.) A poet (Burton) known as the Angel of Death pays her a visit and chaos ensues. Watch for a cameo from her oceanographer brother, Howard Taylor, as the bearded pilot of the boat that delivers Burton to Taylor’s island.

Another guest soon arrives in the form of Goforth’s gossipy eccentric frenemy called ‘the Witch of Capri.’ The part was first offered to Katharine Hepburn, who declined, reportedly insulted to have been asked. In a gender reversal, it’s played to caustic perfection by Noël Coward (with the inspired script addition of having him make passes at Burton’s character himself). It was Coward’s penultimate film—the following year his turn as criminal mastermind Mr. Bridger in The Italian Job would be his last. Throughout the movie Coward wears an impeccable brown tuxedo by his own taylor, the legendary Douglas Hayward and in his grand entrance for the dinner party scene, he is carried across the rocky shoreline aloft a strapping young man’s shoulders. Just like Billy Porter red carpet arrival at the Met Gala — and Taylor’s in Cleopatra.

“She can be so wonderfully coarse,” is how John Waters enthuses about Taylor in the movie’s new audio commentary track. The filmmaker of transgressive, vulgar masterpieces like Pink Flamingos considers himself Boom!’s number one fan (the movie was an inspiration for Divine’s character writing her memoirs, for example, and you can also spot a Boom! poster in the stairwell). Waters has been the movie’s champion for decades, touring a rare 35mm print at film festivals so it’s a treat to get his take here.

In a performance that Waters also likens to, “a female female impersonator,” Taylor screeches like a fishwife and stumbles around barking illogical orders (‘Urgentissimo!’ ‘Pasta in Brodo!’). The scenery-chewing makes even her volatile Academy Award-winning Martha performance in Who’s Afraid of Virginia Woolf? seem like a pale wallflower.

SO BAD IT’S BEYOND CAMP

Boom! isn’t like other so-bad-they’re-awful movies. It’s got pedigree. It’s helmed by Joseph Losey, a director blacklisted in the early 1950s for refusing to testify for HUAC and made most of his later movies like The Servant, The Go-Between and Modesty Blaise abroad. The score is by five-time Oscar winner John Barry (composer of Out of Africa, the James Bond 007 theme, and Dances With Wolves). And after Cat on a Hot Tin Roof and Suddenly, Last Summer, this marks Taylor’s third appearance in material by Tennessee Williams. After going through various working titles (like Goforth and Sunburst) and transposed from Williams’s usual Southern Gothic setting to Italy, Boom! is based on the Pulitzer winner’s “The Milk Train Doesn’t Stop Here Anymore.”

Williams wrote it in the early 1960s after the death of his longtime partner at a time of great personal grief, and began struggling with depression and substance abuse. When the play premiered, critics and audiences jeered. A re-staging with Tallulah Bankhead and Tab Hunter closed after only a few performances. Next Williams adapted it for the screen himself and incorporated biographical Taylor/Burton elements like the many past husbands, the back pain, the drinking, even the intercom system. There are also elements of traditional Japanese kabuki plays and their intentional artifice in the costume, staging and script structure. (This may account for why Burton spends most of the movie in a traditional samurai warrior robe and sword.)

SCENERY TO DIE FOR

All sun-baked cliffs and turquoise waters, the movie was shot in the late summer and fall of 1967, largely on location on a purpose-built mansion set on a cliff in Sardinia’s newly anointed jet-set playground called the Costa Smeralda, or emerald coast. At the time, Prince Karim Aly Khan was developing the untouched coastline around Capo Caccia, hoping high profile stars would do for the area what their presence in Mexico had done for a for sleepy, then-unknown fishing village of Puerto Vallarta. International press had previously followed Burton and Taylor to the set of his film The Night of the Iguana (another Williams adaptation). It worked: although by then in the third year of marriage. international press flocked to Sardinia to cover the shoot. Today the region boasts some of the most expensive vacation real estate in the world.

The Costa Smeralda smartly kept strict control on design development to have a minimal impact on the gorgeous landscape, so even now, decades later, the resulting organic architecture delicately reflects the surrounding nature and its sculptural forms. Boom!’s production designer Richard Macdonald took his cues from that new local architecture to create a villa “both ancient and futuristic.”

The main set is the sculptural Goforth villa, built on a promontory and accessed by a funicular. Its expansive seafront terrace offers a spectacular view for several scenes (and memorable lines).

Here, the great cinematographer Douglas Slocombe (The Italian Job, Julia, Raiders of the Lost Ark, The Great Gatsby, The Lion In Winter, Indiana Jones and the Temple of Doom) offers a beautiful 360-degree scene on the terrace.

The villa has curving, whitewashed walls, unusual windows and gauzy billowing drapes. The interiors are a spare but interesting mix of antique and contemporary pieces (like the Arco lamp) befitting a wealthy modern art collector. If the look seems familiar, it’s because it’s partly inspired by the island’s famous Hotel Cala di Volpe (a famous location in the James Bond movie The Spy Who Loved Me), which like the island architecture owes its distinct style to French architect Savin Couëlle and Jacques Couëlle. There has yet to be an explanation, however, for the set’s series of weird Easter Island-type statues on the brow of a distant hill, often seen in the background.

“Camp is a woman walking around in a dress made of three million feathers,” Sontag wrote.” Or in Taylor’s case, a kabuki caftan robe hand-stitched with more than 21,000 beads and crystals that weighs 42 pounds. Taylor insisted on a nearly all-white wardrobe of feathered and beaded caftans, lounging pyjamas and ruffled lace dresses and, working with costume designer Annalisa Nasalli-Rocca, many costumes are credited to Tiziani of Rome that were in fact created by Karl Lagerfeld, who worked as a freelance designer for the label at the time.

Boom!’s singular fashion statement, however, is the signature headpiece by hair stylist Alexandre de Paris that was described by one critic at the time as looking, “like a blend of fresh flowers with radio aerials and king-size cigarettes.” Taylor loved the headpiece so much that on a break from filming in the fall of 2017, she wore it to the Venice Ball and, as you’d expect, caused double takes from fellow guests like Greek shipping magnate Aristotle Onassis.

Sontag also says that “the hallmark of Camp is the spirit of extravagance.” Bulgari bangles, enormous brooches pinned to casual daywear, chandelier earrings dripping with carats—not paste, because Elizabeth Taylor wears all her own jewels. They’re real, and they’re spectacular. Whether she’s having a wake-up cocktail, coughing blood into a handkerchief, or calling for dictation (or a painkiller injection), the camera lingers on Taylor’s ring finger. Understandably: throughout the movie it features the 29.4-carat, emerald-cut Cartier diamond engagement ring given to her by previous husband Mike Todd that she called “my ice-skating rink.”

The ring is often misidentified as one of Taylor’s later, larger and more historic baubles, the 33.19-carat Asscher-cut Krupp diamond considered one of the largest flawless diamonds in the world. But that wasn’t purchased until after Boom! wrapped filming; Burton only bought it mid-May 1968, the week it was released in theatres. (Besides, it’s square with pronounced facets, whereas the one she wags around in Boom! is clearly rectangular.) And the whopping pear-shaped Taylor-Burton diamond, weighing in at 69 carats, was an even later record-setting auction purchase made in autumn 1969, when Burton found himself bidding against Onassis.

“It’s like she’s on Ambien, or something,” Waters says. It’s true: the hypochondriac character seems to subsist on a cocktail of booze, painkillers and saccharine tablets. There’s a bar cart or tray of booze within reach in shot after shot, so you wouldn’t want to try and keep up with Goforth: over the course of the film’s two days, she throws back highballs, swills scotch, glugs brandy and at one point, daintily sips a supersized Bloody Mary. In one brief scene of an egg-shaped beach hut you’ll notice each of the portholes are dotted with bottles of Smirnoff and J&B. While filming the Burtons lived on their yacht Kalizma, parked just out of view, and Losey later admitted didn’t remember much about Boom!’s shoot, because they were blotto much of the time.

The Burton/Taylor salaries were 75 per cent of the budget: $2.5 million (or about $25 million today) or $1.25million a piece. Never mind the histrionics, Taylor was too young for the part (and Burton too old). The movie’s abject critical failure marked a reversal of fortune for the pair with their audience, who had until now made their films profitable. Instead, it was considered an incomprehensibly bizarre vanity project.

And tastes were changing, with New Hollywood films like Easy Rider replacing stylized and over-the-top star projects. Even Goforth’s longsuffering secretary Blackie (played by Joanna Shimkus), with her natural look, lean frame, and jersey minidresses reflects those changing ideals, and becomes an unwittingly revealing foil for Taylor’s brand of stardom and style of acting. Both would go on to make more unusual European art films like XYZ and The Driver’s Seat, seldom well-received (or profitable) but always adventurous. Because as Waters says, at least they took chances. Once you’ve seen Boom!, you’ll be glad they did too.

Boom! is out on DVD and blu-ray May 28 from Shout Factory, shoutfactory.com