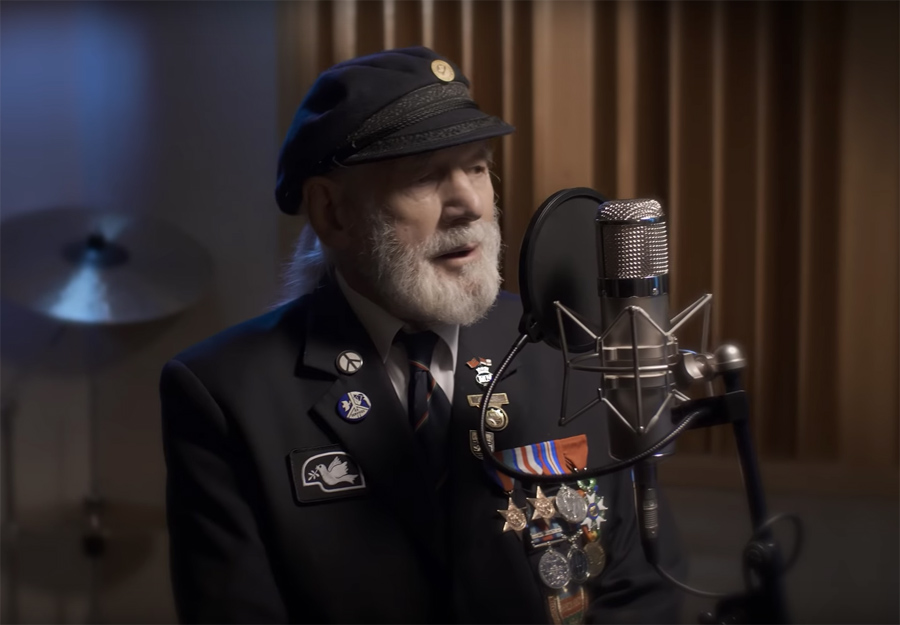 The youngest living D-Day veteran in the world is doing what so many youngsters with a passion for music do — he’s climbing the pop charts.

At a spry 90 years old, British war vet Jim Radford’s song “The Shores Of Normandy” ­— a tribute to the soldiers who sacrificed their lives in the historic invasion that ultimately led to the liberation of France and the downfall of the Nazi regime — currently sits atop the Amazon UK Best Sellers Music Charts, edging out the new Ed Sheeran/Justin Bieber duet “I Don’t Care” for the number one spot.

Radford, who was only 15 when he signed up to serve in the Merchant Navy and build the Mulberry Harbour at Gold Beach, wrote the song, based on his own experiences,  a number of years ago. As a folk singer and songwriter as well as a peace activist, he’s performed it at many different events since — including ceremonies commemorating D-Day’s 70th anniversary. And now, with the 75th anniversary of D-Day approaching, the song takes on a renewed sense of poignancy. And true to Radford’s penchant for activism and community building, the 90-year-old is singing “The Shores of Normandy” for a greater cause, donating the money from sales of the song to the construction of a memorial for the British soldiers who died during the Battle of Normandy. Those who’d like to download the song and contribute to the fundraising can do so through the Normandy Memorial Trust. The Normandy Memorial Trust also uploaded a Youtube video of Radford performing the song, which you can watch at the end of this post.

Of course, unlike the Sheeran/Bieber duet, “The Shores of Normandy is not your traditional pop tune, with Radford’s lyrics understandably resonating a more sombre tone:

For every hero’s name that’s known, a thousand died as well.

On stakes and wire their bodies hung, rocked in the ocean swell;

And many a mother wept that day for the sons they loved so well,

Men who cracked a joke and cadged a smoke as they stormed the gates of hell.

RELATED: Yiddish Glory and the Lost Songs of the Second World War

“I’m delighted. I never in my wildest dreams thought I would be number one in any list,” he told The Daily Mail. “The more copies we sell, the more money we raise to build this memorial.”

He added that, “We want people to remember all those good men. They deserve to be honoured and remembered. The thing that I remember most is seeing [the bodies of] those lads floating in the water — the ones who had to run up the beaches into the machine gun fire and never made it. I can still see their faces now.”