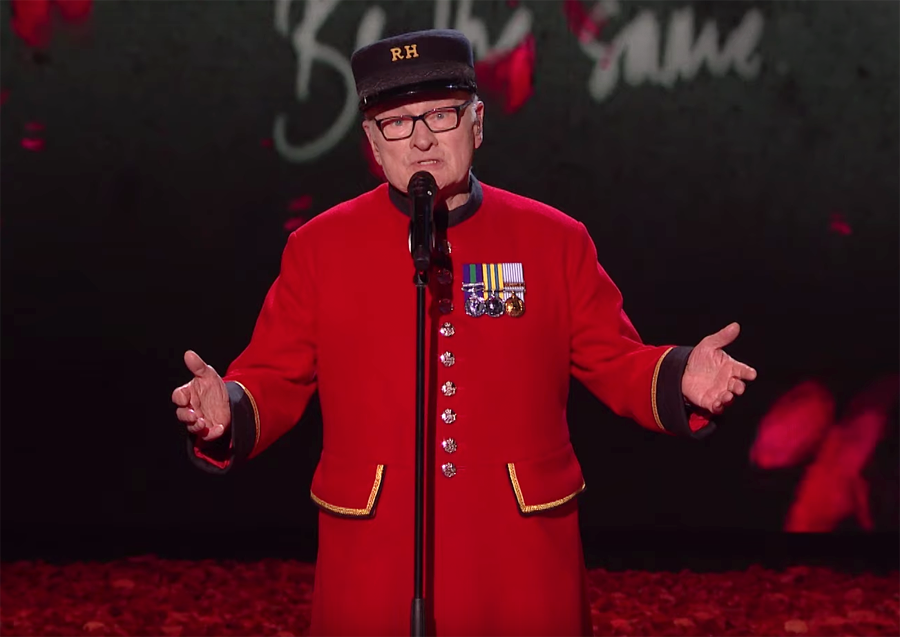 Photo courtesy of Britain's Got Talent via YouTube screen grab

Anyone who knows Colin Thackery can tell you that they didn’t need a reality show to prove to them that the 89-year-old has talent.

A veteran of the Korean War, the British veteran served, according to the Daily Mail, in one of the deadliest battles of the war — the Battle of the Imjin River — in which he and his regiment, “repelled Chinese enemy soldiers, who were fighting for the North. Some 750 men of the battalion fought of successive assaults by a force seven times bigger.”

Thackery returned from battle scarred with the memories of the death and destruction he witnessed as well as by frostbite and hearing damage he endured — the effects of which he still struggles with today. So you wouldn’t think, after all of that, that standing on a reality show stage before millions of people to sing a few songs would rattle him. And it clearly didn’t.

This past Sunday Thackery emerged the oldest winner of Britain’s Got Talent — and surely as one of the oldest reality show winners in history.

“Absolutely astonished,” the 89-year-old said when asked how he felt following the reveal he’d won the contest live in front of more than eight million television viewers, which you can see in the video below. “It’s incredible. I don’t know what to say. I’m stuck for words for a change.”

Thackery, who auditioned for the show on a dare from his friends, performed the Vera Lynn song “We’ll Meet Again” in memory of his late wife earlier in the contest before belting out the winning tune, “Love Changes Everything,” from the Andrew Lloyd Webber musical Aspects of Love, on the final broadcast (see video below). For the latter performance, Thackery wore his military uniform and was accompanied by fellow uniformed veterans as poppies rained from above. Following his win, the war vet, thanked everyone who voted for him as the crowd erupted into chants of “Colin.”

Along with the prize money (£250,000), Thackery also won a spot on the bill of the upcoming Royal Variety Performance, meaning his next audience will include Queen Elizabeth II and the Royal Family.

“I served my Queen for 25 years,” Thackery said on the show, “and to think I could sing for her would be the end.” As the BBC noted, “Thackeray said he would ‘die happy’ if he had the chance to sing for the Queen.”

And when asked what plans he had for the prize money, which works out to roughly $426,000 (CDN), the big-hearted vet said he planned to donate it to the Royal Hospital Chelsea, where he moved following the passing of his wife in 2016.

“Well first of all the hospital, because we are a charity and we are always collecting for something,” he said. “We’ve got a new centre that we’ve been wanting to build, a visitors centre, activity centre. I’d love to think that I set the whole thing off.”

He added that he’d also use some of the money to help his grandchildren purchase a home or pay off school.