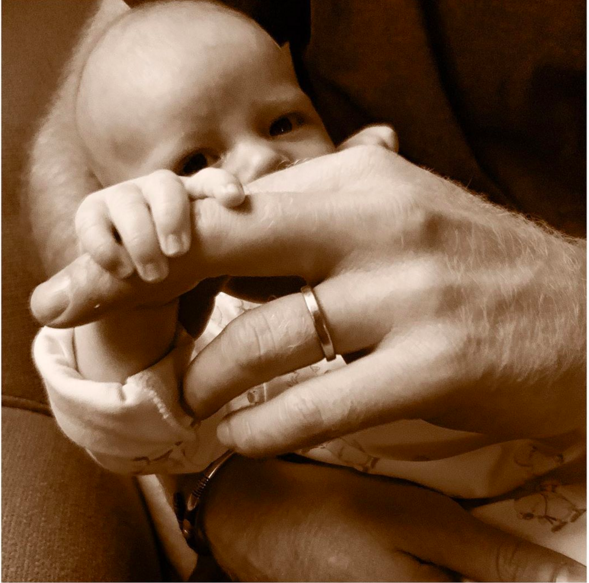 It’s his very first Father’s Day, and Prince Harry marked the occasion with the release of an adorable new photo of little Archie Harrison, who is now six-weeks-old.  The image of the youngest royal clutching his father’s finger was uploaded to the official Instagram account (@sussexroyal) of Prince Harry and his wife, Meghan, Duchess of Sussex, on Sunday. In related news, the Sunday Times reported that Archie’s christening will take place in early July at St. George’s Chapel in Windsor Castle, where Prince Harry was baptized in 1984 at age three months and, of course, the setting for Meghan and Harry’s wedding last year.

Because of prior commitments, the Queen will apparently not attend the christening, the Sunday Times reported. While Her Majesty was there for the baptisms of Prince George and Princess Charlotte, she missed Prince Louis’s christening last year.

For more on Archie Harrison, the latest addition to the royal family, see below.

UPDATED MAY 17: According to a  report on ET, Prince Charles visited his newest grandson, little Archie, in Windsor on Thursday. This follows an earlier visit two days ago from aunt and uncle, the Duke and Duchess of Cambridge, at Meghan and Harry’s home at Frogmore Cottage. Queen Elizabeth II and Prince Philip have already visited the youngest member of the Royal family, as has Meghan’s mother, Doria Ragland.

Archie is Charles’ fourth grandchild. He was on an official visit to Berlin when Archie was born, where he spoke of his happiness at being a grandfather again. “We couldn’t be more delighted at the news and we’re looking forward to meeting the baby when we return,” he said. UPDATED MAY 15: According to a palace spokesperson, the Duke and Duchess of Cambridge paid a visit to Frogmore Cottage to meet the latest addition to the Royal Family.  Prince William and Kate had private family time with Archie and new mom Meghan and Prince Harry.  Wills and Kate did not speak to the media so we don’t know what they think of little Archie, but judging by the baby’s photos so far, we can assume they found him as adorable as the rest of the world does.WPA Pool / Pool

UPDATED MAY 9: New father Prince Harry was in the Hague today to launch next year’s Invictus Games which will take place in the Netherlands. Well-wishers greeted the Duke with gifts for baby Archie, including a baby rattle. The little girl who presented Harry with the present was the daughter of a war veteran who had lost his leg in a parachuting incident.

Harry was also gifted an adorable Invictus Games onesie by Princess Margriet, aunt of the reigning monarch King Willem-Alexander of the Netherlands. Happy Harry also sported an “I am Daddy” jacket for a bike ride.

Archie and his mother remained at home in Frogmore Cottage, with grandmother Doria.

UPDATED MAY 8: Finally! The world has now seen Baby Sussex – and now we know his name! The Queen and Prince Philip were introduced to Archie Harrison Mountbatten-Windsor today.

While it may seem an unlikely choice, the name Archie actually has English origins and means “genuine and bold.” It also has a distinctly All-American feel that references the cultural and entertainment roots of Meghan. Riverdale and the original Archie comics anyone?

As for Harrison, it literally means “son of Harry,” in case you didn’t know.

The Duke and Duchess of Sussex posted the name on their Instagram account, @sussexroyal which included a black and white photo of the baby meeting his great-grandparents. Grandmother, Doria Ragland, also in the photo, who had been present at the birth, looks on with pride.

This is the first-time the Royal Family has released a photo of the Queen meeting one of her great-grandchildren so shortly after birth. Her first time meetings with Prince William’s children were reported but were no photographed together until the christenings, with the exception of Prince Louis, which she was unable to attend.

The firstborn son of Prince Harry and Meghan, the Duke and Duchess of Sussex was revealed today at St. George’s Hall, in Windsor Castle, Windsor. WATCH: Prince Harry and Meghan introduce their newborn son to the world

The Queen and Prince Philip, who are currently at Windsor Castle, will be the first members of the Royal family to meet the newborn. At the charming photo call, where a visibly emotional Meghan said, ” I have the two best guys in the world so I’m really happy.” She also revealed that the new family had bumped into Prince Philip on the way to introduce their son to the world. The couple did not announce the baby’s name, but the smart British money is on Spencer, a tribute to Harry’s mother Diana as Spencer was her family name.

UPDATED MAY 7:  Prince Harry’s brother, Prince William had some amusing words for his first nephew. Stepping out in public with wife, Kate, he said he was “absolutely thrilled” about the birth of the Duke and Duchess of Sussex’s son, adding he was “looking forward to seeing them in the next few days when things have quieted down.”

He added, “I’m very pleased and glad to welcome my brother to the sleep deprivation society that is parenting!”

The future King and Queen of England reposted Harry and Meghan’s announcement on their Instagram account @KensingtonRoyal and added a personal message: “The Duke and Duchess of Cambridge are delighted with the news of the birth of The Duke and Duchess of Sussex’s son today, and look forward to meeting the latest addition to the family,” the message read.

Prince Charles and Camilla, the Duchess of Cornwall also weighed in for the first time saying they had not yet met their new grandchild – they are currently on a Royal Tour in Germany – but “We couldn’t be more delighted at the news and we’re looking forward to meeting the baby when we return.”  See the official Instagram post below: With the announcement of the Duke and Duchess of Sussex’s first child being born, royal watchers have also now turned to the topic of perspective godparents. And this being the British royal family, there is every assumption to be made for multiple choices. The Queen chose eight godparents for Prince Charles, while Prince William and Kate selected seven godparents for Prince George, five for Princess Charlotte and six for Prince Louis.

But who precisely will they choose? Royal experts are firm that protocol dictates close family members and friends, so don’t be surprised if someone from the Spencer clan – Diana’s family – will be in the mix.

While we are speculating, there is a possibility that such an honour could be bestowed upon Canadian fashion consultant and television personality Jessica Mulroney and her husband, television news anchor and son of former Prime Minister Brian Mulroney, Ben. After all, Jessica is one of Meghan’s nearest and dearest and her children were in the wedding party. Also possibly a pick for the godparent role is Meghan’s BFF,  Canadian Markus Anderson, who she met while she was in Toronto filming Suits. The dashing all-Soho House consultant has been seen at Markle’s side at the most important times in her relationship with her prince. He accompanied her to the Invictus Games opening ceremony in Toronto in 2017, the night before the couple made their official debut and was photographed with her while she was in New York for baby shower. Either or both choices a coup for Canada!

The long awaited arrival is here. Prince Harry and wife Meghan have announced the birth of their son. The gushing prince addressed the media outside the stables at Windsor and spoke about how amazing witnessing the birth was and that both Meghan and the baby are doing well. As for names, Harry joked that the baby was overdue so the couple have had plenty of time to discuss the name but he wasn’t about to spill that today. He also promised to return in two days to greet the press with Meghan and the baby with him so that their child — who is 7th in line to the throne and the first child of mixed race born into the British royal family — can be introduced to the world.

“This little thing is absolutely to die for, so I’m just over the moon,” a beaming Prince Harry told reporters outside Frogmore Cottage, the couple’s residence near Windsor Castle. “Mother and baby are doing incredibly well. It’s been the most amazing experience I can ever possibly imagine. How any woman does what they do is beyond comprehension, and we’re both absolutely thrilled.”

See the video below:

The Duchess and baby are both healthy and well, and the couple thank members of the public for their shared excitement and support during this very special time in their lives.

More details will be shared in the forthcoming days.” And as is the custom when a new member of the Royal Family is born, there is an official placing of the announcement outside Buckingham Palace.  See video below:

The British Royal Family’s official Instagram account also posted an announcement and included mention of Prince Harry’s beloved late mother, Diana’s family being informed of the news along with the Queen, Prince Philip and Prince Charles and Camilla.

“Her Royal Highness The Duchess of Sussex was safely delivered of a son at 0526hrs this morning.

The Duke of Sussex was present for the birth. The Queen, The Duke of Edinburgh, The Prince of Wales, The Duchess of Cornwall, The Duke and Duchess of Cambridge, Lady Jane Fellowes, Lady Sarah McCorquodale and Earl Spencer have been informed and are delighted with the news. The Duchess’s mother, Doria Ragland, who is overjoyed by the arrival of her first grandchild, is with Their Royal Highnesses at Frogmore Cottage.

Her Royal Highness and the baby are both doing well.” While Meghan’s mother was mentioned in the announcement, one name left off was that of her father, Thomas Markle. However, Markle was quoted in the U.K. tabloid The Mirror, “I’m delighted to hear that mother and child are doing well. I am proud that my new grandson is born into the British royal family and I am sure that he will grow up to serve the crown and the people of Britain with grace, dignity, and honor. God bless the child and I wish him health and happiness, and my congratulations to my lovely daughter Duchess Meghan and Prince Harry, and God save the Queen.