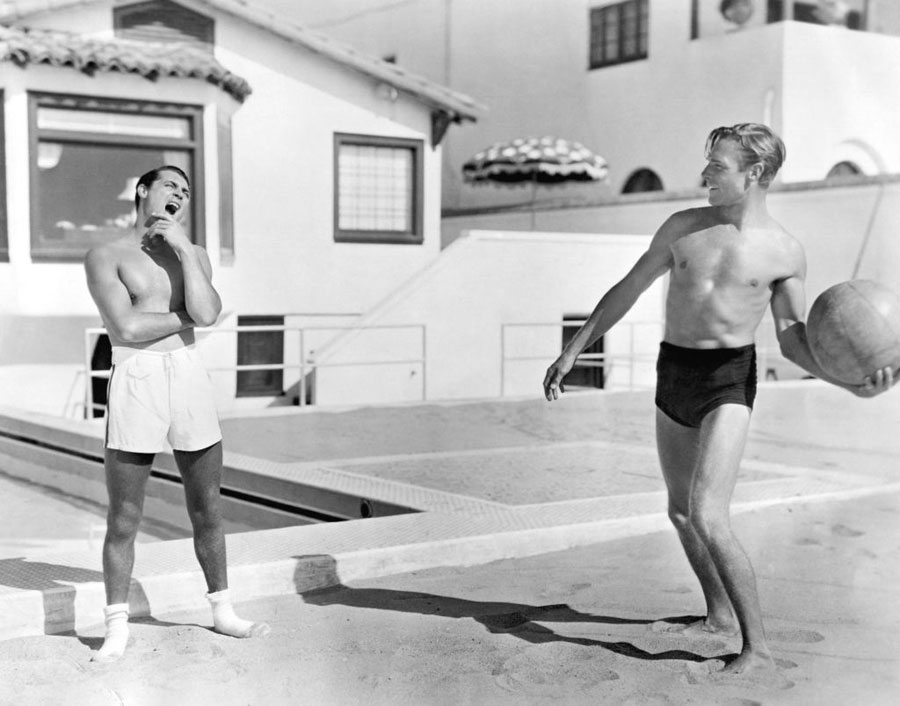 They were two handsome bachelors, who happened to be Hollywood heartthrobs and roommates. Cary Grant and Randolph Scott lived together off-and-on for nearly 12 years, sharing a Santa Monica beach house and a mansion in Los Angeles’ Los Feliz neighbourhood.

But were the two living together as a gay couple in plain sight during the oppressive 1930s? Hollywood of that period was run by the infamous iron-fisted studio system, which monitored, managed and practically dictated a star’s personal and public life. Leading men like Grant and Scott would almost certainly not have been allowed to openly live homosexual lives, much less as a couple.

Yet, rumours persisted about the two and, curiously, they both agreed to a photo spread in a fan magazine, which featured them as “bachelors” sharing a home together. The photos show them happy, laughing, working out, cooking—picture perfect images of domestic bliss, if ever there was.

But the two never publicly acknowledged if they were in love or in a relationship. And, between the two, they were married seven times to various women, including wealthy heiresses. At one point, Grant was married to Barbara Hutton, one of the wealthiest women in the world and Scott was married to heiress Marion DuPont for three years. Grant went on to marry actress Dyan Cannon, fathering one daughter, while Scott had two adopted children with his second wife.

It is said the two actors first met in 1932 on the Paramount set of Hot Saturday, apparently immediately hitting it off. They were soon living together. Shortly after, the famous photo spread was published which inadvertently depicted them as a cozy couple.

In 1934, the studios ordered Grant to get married. His wife, Virginia Cherril, wound up divorcing him 13 months later and Grant moved back in with Scott at the beach house. Stories of a variety of attractive young women going in and out of the beach house—dubbed “Bachelor Hall”—was said to be planted in the press by the studios.

There were conflicting stories about the true nature of the duo’s relationship.

Their mutual friend, Carole Lombard, once jokingly referred to the pair as having the perfect relationship: “Randy pays the bills and Cary mails them.”

The fashion critic Richard Blackwell—of the infamous Mr. Blackwell’s annual best and worst dressed list—claims in his memoir that he lived for several months with the two and it was obvious they were, “deeply, madly in love, their devotion complete.”

Yet, Grant’s daughter, Jennifer Grant, wrote a memoir in 2011, in which she dismisses the notion he was gay and writes: “Dad somewhat enjoyed being called gay. He said it made women want to prove the assertion wrong.”

However, a 2016 documentary came right out and stated that Grant was gay. The film, Women He’s Undressed, about the three-time Academy Award winning costume designer Orry-Kelly, acknowledges Grant was in a gay relationship with the designer in the 1920s. Both were young and struggling in New York City to make ends meet before moving together to Hollywood to pursue their dreams. By the early 1930s they went their separate ways and Orry-Kelly would go on to become one of the great costume designers in Hollywood and worked with such stars as Marilyn Monroe in Some Like It Hot and Ingrid Bergman in Casablanca.

By the mid 1940s, however, Grant and Scott were no longer living together but it was said the two remained close friends throughout most of their lives. When Grant died in November 1986, Scott passed away three months later.

What If Cary Grant’s Most Famous Character Was Cary Grant, the Famous Actor?