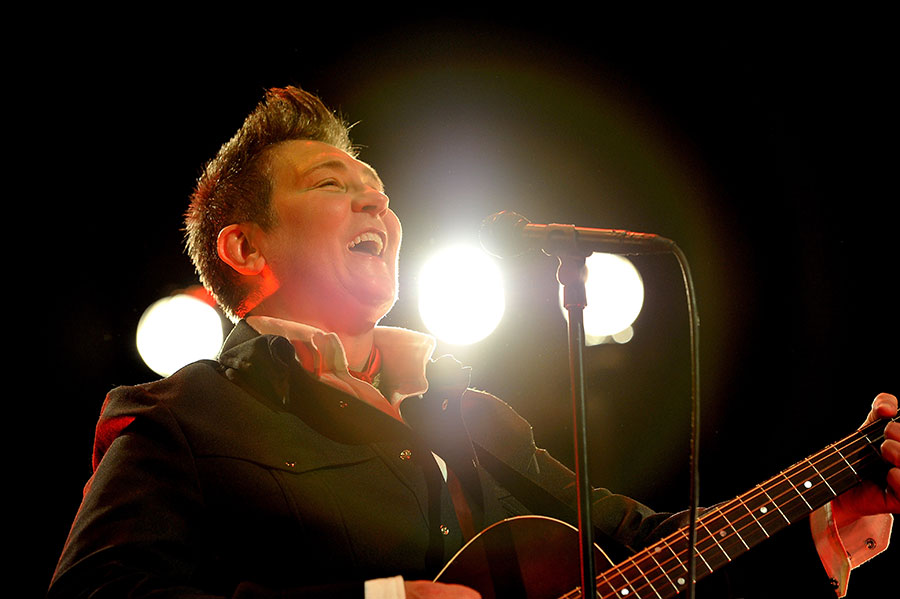 In honour of Canada Day, we look back at interviews from the last several years with five home-grown stars who discussed how the Great White North helped shape their careers and Canadian music’s influence at home and abroad.

From staying up late as a kid to listen to AM prairie radio to an unexpected encounter with Terry Fox during his Marathon of Hope to perilous tours along icy northern roads, Canada’s influence on some of its most successful artists is undeniable. In celebration of Canada Day, we look back at conversations with five Canadian music legends — Randy Bachman, Paul Anka, k.d. lang, Tom Cochrane and Bruce Cockburn — about how the Great White North helped shape their careers and Canadian music’s influence at home and abroad.

Often called the “architect of Canadian rock and roll,” Randy Bachman, 75, reflects on how the Canadian music landscape has changed since he emerged as one of the first internationally-successful Canadian artists in the 1960s as a member of The Guess Who:

“Since MTV started and the videos started to get out there, I know people all over the world would look and see what [was] coming out of Canada. Canada is so different and so diverse—no two bands are the same. You try to compare The Barenaked Ladies to Rush to April Wine to Metric to Arcade Fire—there’s no comparison. We all grew up in this wonderful era where our parents or grandparents were ethnic so that ethnic music was in our household growing up … and that influences your own music, plus everything else we’ve got in Canada. Me growing up in Winnipeg and being stuck there, and Neil Young being stuck there, and everybody else there, [we listened to] whatever came in there on the late night airwaves. We listened to A.M prairie radio at the top of the Great Plains.”

“But, that’s what I think Canadian music is like—every band is really individual. It’s hard to find two bands that are the same in sound and in composition and in their attitude and in the music they put out. So, it’s really exciting.”

Throughout his long career — whether making girls swoon as a teen idol or hanging with the Rat Pack in Vegas — legendary crooner Paul Anka, 77, says he hasn’t forgotten his, “Canadian days.” The Ottawa native, and former Zoomer cover subject, reflects on the Canadian sensibility that helped keep him grounded over the years:

“Is there a “Canadian sensibility”—a civilized dynamic of living? I think there is … we had our own stamp. So, that came to play for sure. And it came to play that I came from a good home and had great parents. Whatever goes on up there in our educational system, there’s definitely a Canadian vibe. I don’t know how to put my finger on it, but we’re educated differently, we look at life differently, we are brought up differently. And there’s a Canadian culture, and there’s something about being brought up there that has really kept me what I am. I believe that and I’ve [talked about] that to many Canadian artists. There’s just something about what lays within us that makes us that little bit different.”

Anka on the influence of Canadian music around the world:

“I was in Singapore, did a big show there. We had like 8,000 people. And that’s the only time you really feel how you impact them. So, when I tour down there they run up with all these old records. And some of them are in their 60s and their 70s … and it amazes me. Even when I was in Poland, even Russia. It was just amazing. And the music means a lot more to foreign places than it does here because we get so much of it. It’s a bigger impact down there in Asia and South America. It’s amazing the influence that we bestow on them. It’s amazing.”

A multi-time Grammy and Juno winner, as well as a Canadian Music Hall of Famer, lang, 57, reflects on the early years of her career touring Canada — a sometimes perilous experience that, she notes, seems something of a rite of passage for Canadian performers:

“Well, a couple things come to – well, I mean, a lot of things come to mind, but a couple of them really come to mind and most of them were in the dead of winter, touring in a van across Canada in the dead of winter, which was stupid (laughing) to begin with, but that’s what you do at the beginning. I just remember being in South Saskatchewan where it is absolutely level flat and it was, there was a lot of snow that year and it was a full moon, and it was just   it was just the visual of that was so impactful. Just being essentially on an ocean of prairie, it was really impactful. And then the second one I remember we were in Sudbury and there was an ice storm and we were trying to fill up the van. And the van was parked at the gas station, and the gas station was on a bit of a grade and the van was sliding towards the pumps. It was stopped and sliding towards the pumps. So, yeah, it was a little ‑‑ that was a little scary. It’s amazing how many Canadian – and particularly Canadian singers – will have these stories of snowy, everybody packed into a van sort of. I guess that’s what you do especially in Canada, but it’s incredible.”

“Life is a Highway” singer Tom Cochrane, 66, recalls riding up and down the roads in his early career with the band Red Rider:

“When we were struggling, Alberta was supportive, as the East Coast has been. But, all over Canada [has] always been pretty supportive.”

But it’s one particular encounter, with perhaps the greatest Canadian of all, that inspired Cochrane to keep moving forward, eventually establishing himself as one of the great rockers in Canadian history:

“We were living on a shoestring. And we’re driving back from Winnipeg to Toronto and I’m wondering, ‘Why the heck am I doing this?’ Sleeping in the back of the station wagon, we’re taking turns driving. And outside of Thunder Bay traffic stops and the rain’s pouring down and I wake up and this police car goes by and then slowly, out of the drizzle, comes this one-legged boy running. And you wonder whether it’s tears or whether it’s rain running down his face and he’s looking ashen. You can see the pain, but you can see the courage in his face. And that was the last day [Terry Fox] ran.”

“And it hit me like a ton of bricks. It was a moving experience and I thought, ‘How tough is my gig? How can I complain about this? I’m able to make music, I’m making people happy with the music.’ And it sort of changed my outlook on life. It was one of those markers that you pay attention to and you go, ‘I’m going to keep at this for a little while longer.’ It was a powerful experience.”

Bruce Cockburn, 74, is one of Canada’s most celebrated songwriters, as evidenced by his storied career and his 2017 induction into Canada’s Songwriters Hall of Fame. Who better, then, to comment on what makes Canadian songwriters so unique when compared to their American counterparts?:

“I think, first of all, some Canadian music is indistinguishable from the music of everywhere. If it’s poppy enough then you can’t tell where it came from. But the songwriters that Canada’s most famous for, Neil Young, for instance, Leonard Cohen, Joni Mitchell, Alanis Morissette – those artists are doing something that nobody else does. And songs that come from England don’t sound like that, songs that come from America don’t sound like that. How do you pin that down? I don’t really know. I see it as there’s kind of a sense of psychic space in the lyric writing. I mean, it’s more a case of lyric than anything else. It can’t be coincidental that America produces Tom Waits and Rickie Lee Jones and Bob Dylan and Canada produces Leonard Cohen and Neil Young and Joni Mitchell. And you couldn’t mistake any of them for the others. And I hear a sense of, a kind of thoughtfulness, a sense of space, a kind of inclination to reflect on things that I don’t hear as much of in the music from other places.”