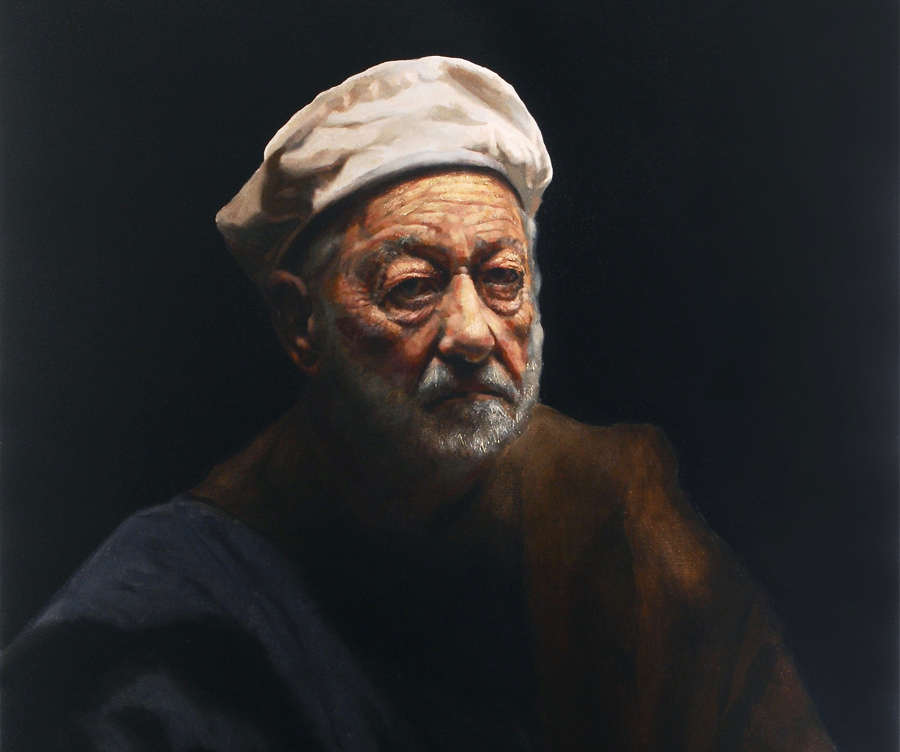 All images courtesy of Michael Goodson

“Life,” legendary Dutch artist Rembrandt van Rijn once mused, “etches itself onto our faces as we grow older, showing our violence, excesses or kindnesses.”

Rembrandt may as well have been talking about Canadian artist Michael Goodson’s painting Baroque Dad, a lifelike, textured and honest portrait of the artist’s 85-year-old father, Bob Goodson, that successfully earned inclusion in the Long Live Rembrandt exhibition, which launches at Amsterdam’s renowned Rijksmuseum on July 15.

“The reason for painting my dad is his availability and his utter lack of vanity in terms of appearance. He is not afraid to have wrinkles and lines and is comfortable being depicted in a way that our youth obsessed culture might consider ‘old’ or unflattering,” Goodson tells Zoomer. “Dad jokes that his modelling fee will go up as portraits of him gain exposure.”

The Long Live Rembrandt exhibition marks the 350th anniversary of the Dutch master’s passing and resulted in more than 8,000 entries of original artwork inspired by Rembrandt from artists in 95 countries. Goodson, an Ottawa native, was one of the artists whose work was chosen to hang in the exhibition alongside Rembrandt’s own celebrated pieces — an opportunity that he is “thrilled and honoured” to receive.

The 56-year-old former visual arts high school teacher, whose work has appeared in solo and group shows and earned him accolades like the 2018 Marjorie Loughery Lifetime Achievement Award in Visual Arts, left his teaching career in 2010 to pursue art full time. He graduated with his Masters in Fine Arts from the City and Guilds of London Art School in the U.K. just prior to his 48th birthday.

It’s a unique creative journey that seems, at least thematically, to have left a lasting influence on Goodson’s work which, he notes, emerges, “from the feeling that a portrait is a kind of marriage of geography and psychology, a topography of our experiences that looks back at us.”

He also points to Rembrandt’s influence and adds that, “I find several of Rembrandt’s late self-portraits to be a kind of juggling act between painting and sculpture, where we, as viewers, feel a sentience emerging from the canvas through the material.”

“As an ‘emerging’ artist, there is sometimes a perception that I must be under a certain age in order to be considered as viable or relevant by some galleries and institutions,” Goodson says, pointing out one prestigious art award whose organization boasts about their policy of inclusion while at the same time limiting its prize to artists under the age of 40. “Apparently,” he says, “age is exempt from the protections of this policy.

“I merely point out that there exists a public perception that true innovation is the product of youth and that somehow age necessarily blunts our capacity to see things anew,” he explains. “I would point out that ego, desire for attention and simplistic, reactionary rebellion are all antithetical to true creative innovation and are things that age often strips away from the catalogue of motivators.”

For good measure, Goodson adds that, “Rembrandt’s best and most innovative work was produced in his late 50’s and 60’s.”

Artists Think INSIDE the Box for Project that Preserves Seniors’ Memories