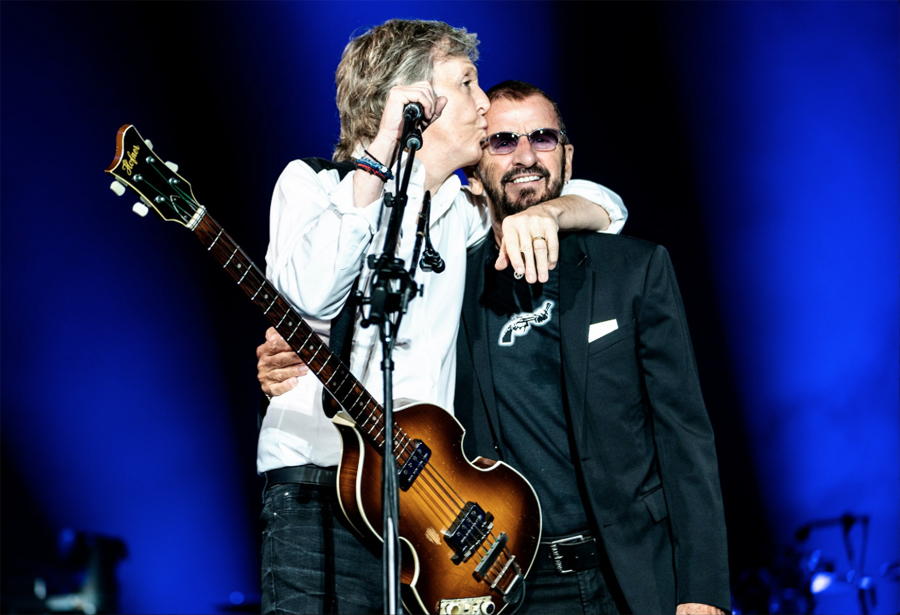 On a weekend when the now-defunct Roxodus Music Festival — which closed up shop under dubious circumstances just days before its inaugural kick off — was set to bring together a slew of music legends on one stage in Ontario, the stars aligned to bring music fans two classic rock reunions of a different sort.

The first took place on Saturday, July 13, in Los Angeles, when Paul McCartney arranged for the closest thing to a Beatles reunion by bringing fellow Fab Four member Ringo Starr onto the stage during a concert at Dodger Stadium — a thrilling surprise for the live crowd which resulted in the pair jamming to “Sgt. Pepper’s Lonely Hearts Club Band (Reprise)” and “Helter Skelter” (see video below).

“Reunited with my favourite Starr” McCartney, 77, tweeted after the show, along with a photo of himself planting a kiss on Starr, 79, while on stage during the concert. Starr tweeted a shot of the pair playing on stage with the caption, “I had a great night last night love you man peace and love.” It was the duo’s first high profile, on-stage pairing since their 2014 “Beatles reunion” at the Grammy Awards, during which they played a total of zero Beatles songs. This night, however, proved far more exciting. According to CNN, “the crowd exploded with enthusiasm. Some fans teared up and others looked like they couldn’t believe their eyes … It seemed like thousands of tiny jewels lit the stadium as concertgoers took out their phones to document the moment.”

As classic rock reunions go, it’s not easy to top the Beatles. Still, not to be outdone, the very next day Bob Dylan, 78, and Canuck rock legend Neil Young, 73, teamed up for a duet to close out a concert at Nowlan Park in Kilkenny, Ireland. The pair co-headlined the show, playing separate sets, before coming together to perform the hymn “Will the Circle Be Unbroken,” Rolling Stone reports. While both stars have performed the tune at different points in their careers, the publication adds that the last time they played it together on stage was way back in 1975 at a concert in San Francisco.

Fans in Kilkenny should be extra grateful for the duet, as the pair co-headlined a show in London a few days earlier and, reportedly, didn’t share the stage at all that night. You can see video of the Kilkenny duet below.

Yesterday: Imagining A World Without the Beatles

Global Beatles Day: 12 Fab Four Lyrics and What They Mean

Bob Dylan, Hemingway and the History of Legends Hiding in Everyday Toronto Addresses